Kildare's Wildlife Watch: The short season of the visiting redwing 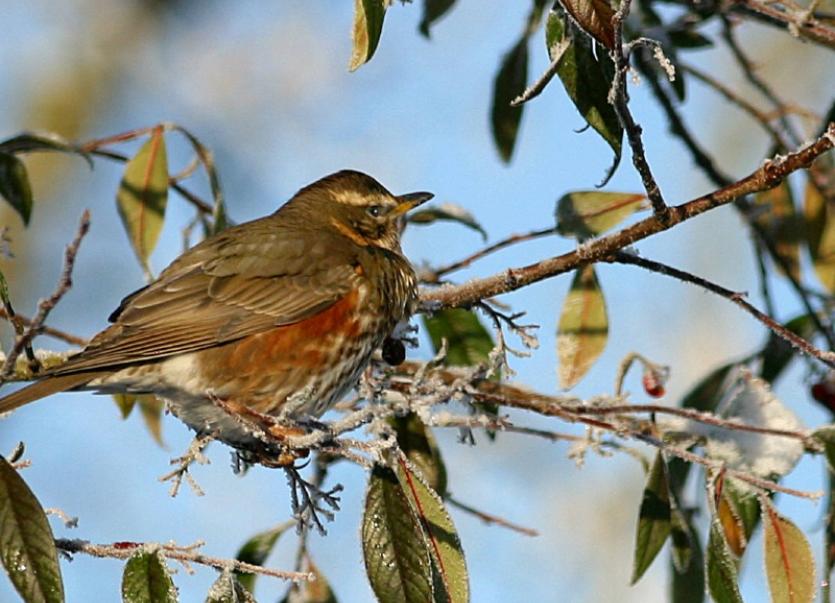 Ireland welcomes many wildlife species that use our mild winter weather as an opportunity to continue feeding when their own countries become covered in snow and ice, including the well known whopper swans and the greenland white-fronted geese.

Another species that visits Ireland is the redwing (deargán sneachta as Gaeilge). This species visits Ireland from Scandinavia and Iceland each year and, according to Birdwatch Ireland, it is widespread, meaning you may be lucky enough to identify this species within your 5km this week.

I have also chosen this species as a follow on from our previous piece on the mistle thrush, as similar to the mistle thrush, the redwing has characteristic brown spots (actually they are more like streaks) on their chest and a uniform brown feathers on their back.

However, there are some more obvious identification markers to look for in the redwing, as the name suggests there is an obvious red colouring on the sides of its belly.

The redwing also has a distinctive broad white colouring in the area of the eyes. While visiting our shores, the redwing feeds on both invertebrates such as worms and berries.

They arrive each year around October and remain in Ireland until March/April — so the next few weeks will be your last opportunity for another year to identify this bird in your community.

The redwing does not breed while in Ireland, and by mid-April most if not all them will have departed our shores.

On their return to their native country they will usually be found in woodlands that include birch and conifer trees, with the birds building a nest either on the ground or in low shrubs.

The young will be dependent on the adults for at least two weeks after birth before they begin to fledge.

This week will you spot a redwing in your community? Although also members of the thrush family, watch out for the red and white distinctive markings on the redwing.

If you come across a wildlife species that you would like help identifying I would be happy to help, contact me at bogs@ipcc.ie.