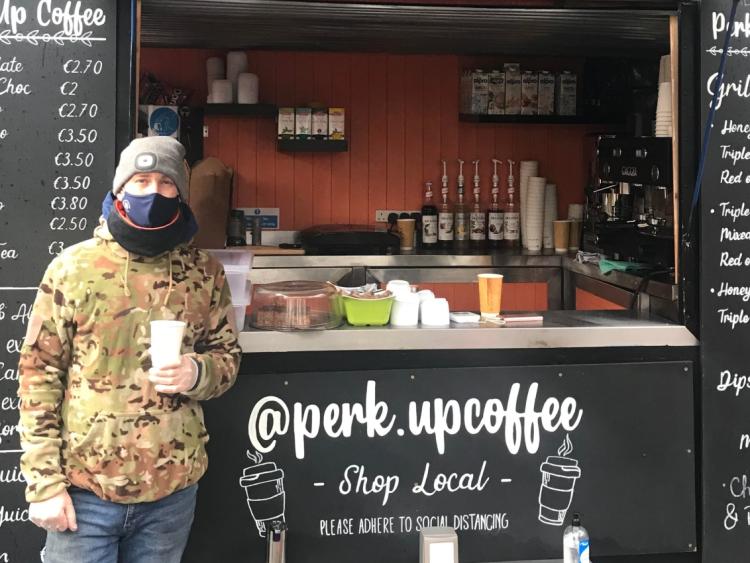 A Naas-based casual trader has defended his right to earn a living following criticism of the sector at a local authority meeting.Barry Mooney, a native of the town, operates the Perk Up mobile coffee selling unit near the Grand Canal in Naas, which is a popular walking and cycling route

She asked if Kildare County Council intended to do anything about mobile coffee retailers.
Cllr Breen claimed that this is not allowed under existing bye-laws, which are to be reviewed shortly and councillors, traders and residents will be asked for their views on those laws.

Barry Mooney launched his mobile coffee enterprise, having been approached by a friend “who said he had a coffee van and if I wanted to give it a try and see if it works”.

This came after the loss of his livelihood — a catering enterprise serving an entertainment venue in Crumlin which, like all public venues, closed because of Covid-19.

“As the months passed by, I had to dispose of all stock we had at a massive loss to us.

We then ended up like many other people in the same position, wondering what was the future going to bring. I needed to provide for my family. It’s a dark place to be in.
“There was a lot of pain and so much uncertainty about how we were going to pay our mortgage and other household bills,” said Barry, who’s married to Kerrie-Ann and has three children Ben, James and Matthew, aged between one and nine.“So we set up Perk Up coffee and it’s something I know inside out.”
He joked: “my boys help out by testing our bakes and hot chocolate .”

Barry’s family (his dad is a retired garda who was based in Naas) have had businesses in the town over the past two decades.
He said criticism of ventures such as his was “very hurtful and made me very depressed” and he felt he was being singled out.

“I am trading on private land. I am not breaking any private land laws, I don’t need planning permission as the vehicle is mobile and I move it from place to place as needed like a cottage trader selling eggs or turf . There are others who are doing the same and trying to make a living due to Covid.”
He says he places extra bins along the canal and empties them twice a day at the weekends.
His comments followed a Naas Municipal District meeting, during which Naas councillor Anne Breen said traders were complaining about casual trading on the canal.
She said coffee shops in the area ‘pay rates’' and asked if KCC intended to do anything about the mobile coffee retailers.
Cllr Breen declined to identify the complaining traders when asked last Monday, and said her main concern is addressing overall casual trading issues in Naas.
Under the Casual Trading Act traders are generally required to hold a licence to comply with the licence terms and offences attract fines.
Cllr Breen said that at the moment casual trading is not permitted, pending the outcome of a forthcoming review.

Any changes to the laws will be put on public display in advance.
KCC official Eoghan Murphy said coffee vendors have “popped up all over the county”, partly because a lot of people can no longer visit businesses like restaurants.
“People see opportunities here and elsewhere,” he added.
Many businesses in Naas have been guaranteed a commercial rates waiver as a result of the shutdown, meaning no rates are due to KCC.
And the government has said that local authorities will be compensated for this loss of revenue from central funds.