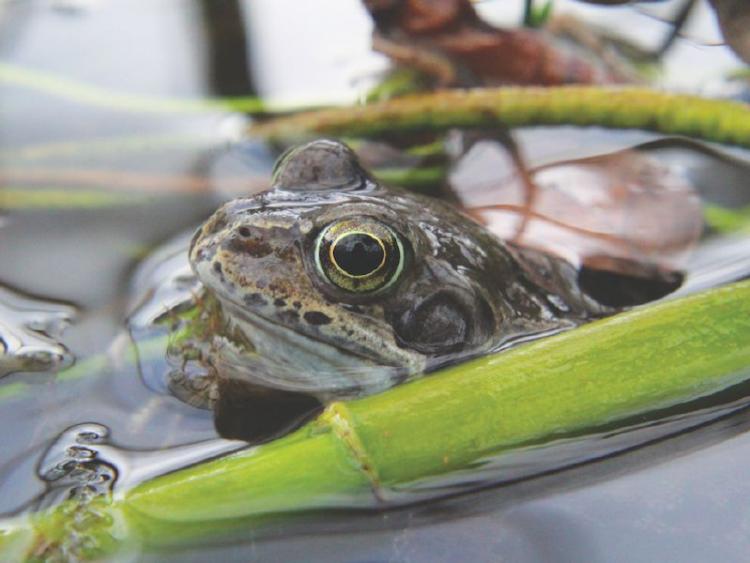 February 2 was World Wetlands Day, a day celebrated around the world, and the theme of 2021 is wetlands and water.

Every year on this day, the Irish Peatland Conservation Council launches its citizen science Hop To It Frog survey, the longest running frog survey in the country.

Ireland has only one species of frog, the common frog (loscán as Gaeilge) and it is found in every county of Ireland in habitats including parklands, gardens, woodlands, grasslands, and, of course, wetlands.

The common frog is only one of three native amphibians in Ireland, the other two being the natterjack toad and the smooth newt.

But why does the Irish Peatland Conservation Council want to know about frogs in your area?

Frogs are considered biological indicators of pollution. They have a short lifecycle and the knowledge we have about their lifecycle means changes in their breeding behavior can be observed in a short period of time.

The common frog is known as the friend of gardeners, as it feeds on slugs and other invertebrates that may be partial to a tasty meal of our vegetables.

They gather in wetlands in early spring, with the males providing a chorus of croaking as they try to attract a female. The female lays her eggs, known as frog spawn, and within 10 days tadpoles emerge.

At first tadpoles are plant feeders but as they develop they soon find a taste for freshwater mini beasts including shrimp and hoglouse.

After 10 weeks, the tadpoles will have developed their legs and are ready to emerge onto land. It takes these young froglets another three years before they are fully grown.

Their skin is sensitive, as while on land they breath like us but under water, in the absence of gills, they breath through their skin.

This week and over the coming weeks, will you find a frog in your 5km? If you do, don’t forget to submit your frog sighting online at www.ipcc.ie or via e-mail bogs@ipcc.ie.

You may also come other wildlife, take a picture and I would be happy to help identify any wild species for you. Contact me at bogs@ipcc.ie.