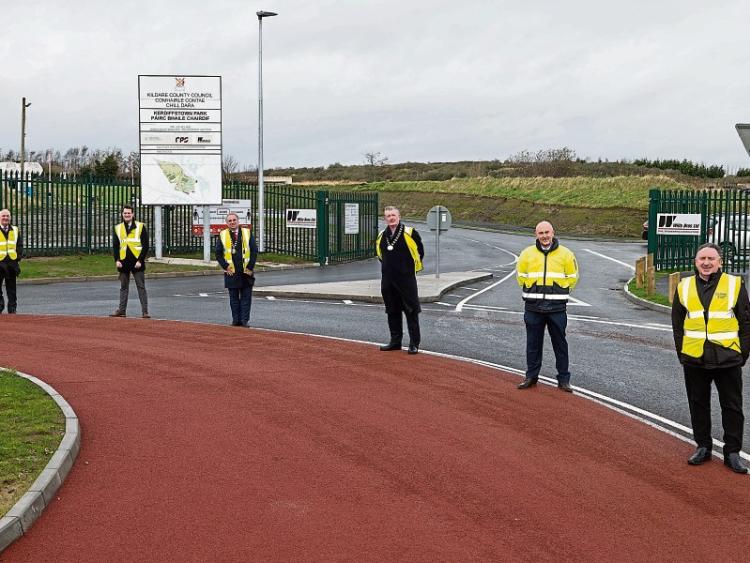 The plan to provide a park and playing fields at the former landfill site at Kerdiffstown could finish ahead of schedule.

Project manager James Mulligan told a Naas Municipal District meeting that the four and half year contract is due to conclude in the first three months of 2025 but he believes that could be done by up to a year earlier.

The redevelopment of the 80 acre site was approved over two years two years ago.

The main feature of the development will be three synthetic pitches suitable for multiple field sports — GAA, rugby and soccer, with floodlighting.

The plan is to provide an amenity park with a multi-sports facility. It will have vehicle/ pedestrian/ cycle entrances, public walkways and informal tracks, a car park with 100 spaces and an overspill car park. There will be three five-a-side pitches, a playground, ponds, bee friendly planting, paths and a running track.

There will also be four changing rooms, toilets, a storeroom, bicycle parking and fencing. The estimated overall project cost is €30m-€40m.

The 75 acre site was once among the most controversial dumps in the country. In January 2011 a series of fires began to burn deep within mounds of waste and site emitted noxious odours as well as plumes of white smoke.

It took 27 days to bring the fire under control and liquid nitrogen was used to extinguish the blaze.

Prior to the fire taking hold, noxious odours were a feature of the dump and were present over a wide area.

It was eventually closed by a court order.

And it emerged during the court hearing that Neiphin Trading Limited, the company which operated the site was in financial difficulty.

More recently it was reported by The Sunday Business Post that the State has been unable to recoup the estimated €50m cost of cleaning up the site.