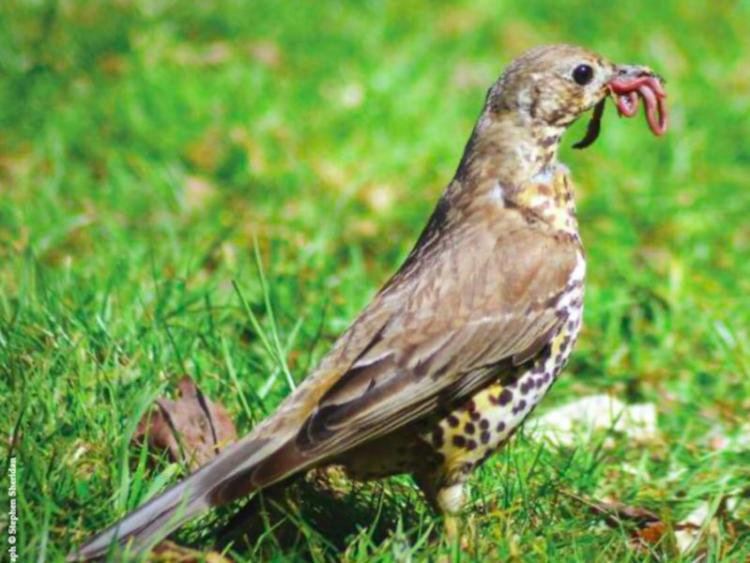 For the past couple of weeks I have been watching a small tree across the road from my home. It’s the last one with a few remaining berries and I have identified wood pigeon, chaffinches, magpies and one of the thrush species regularly foraging from it.

I would have written this article sooner, only I had a problem — I could not identify if I was watching a mistle thrush or a song thrush visit the tree. All my attempts to get close and take a picture were failures, as the bird I was watching was much quicker at flying away than I was at taking a picture!

However, I did get close enough to look out for some features that help distinguish between the mistle thrush and song thrush.

Although the song thrush is said to have uniform brown feathers on the back and the mistle thrush is paler, this did not help as I was only looking at one of these two species. Instead, I focused my attention on the characteristic spots on the bird’s chest.

The spots on the song thrush are located in lines and are described as pointed at the top. However, the bird I was looking at had rounded spots and no visible lines. So I eventually decided, after much debate, I was witnessing a mistle thrush.

The mistle thrush (smólac mór as Gaeilge) is a resident bird in Ireland and, thankfully, the populations, according to Birdwatch Ireland, are good at this time.

It can be regularly observed in our gardens and parks and, as I witnessed it, favours foraging berries from trees as its diet during the winter months, but will prefer to eat invertebrates including worms, snails and beetles during the spring and summer.

In your 5km this week, will you come across the mistle thrush? As we continue to stay at home for the next few weeks what will you find visiting your garden? Take a picture and I would be happy to help identify any wild species for you.