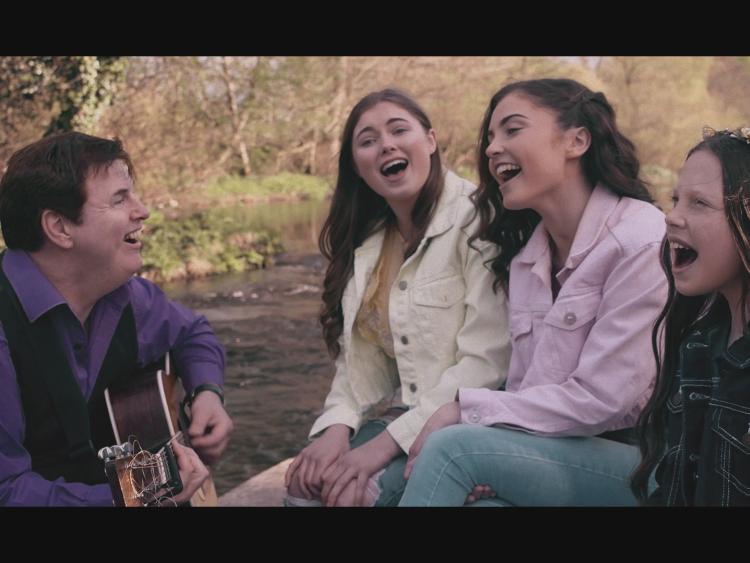 Kildare's Maher family have blown away the critics with their debut single written by renowned song writer Brendan Graham.

Accompanied by daughters Ruby (11), Robyn (17) and Stacy (18), dad Dave is thrilled the song went straight to number two in the Irish itunes charts when it was launched on January 8.

"Lullaby for the World is a beautiful song by Brendan Graham, who wrote You raise me up, and it is a song about climate change. It's a positive anthem for the future," said the Newbridge man.

"The response has been amazing. We are thrilled. My daughter Ruby, who recently featured on the UK version of The Voice, does the main vocal. She was picked to be on will.i.am's team. The song has already reached 40,000 hits.

"A major social influencer, Ryan, who is a big star on Tick Tok, is also trying to get millions of kids to put their  'save the world face' on with make up to our song, and if it catches on it will be massive as we are already at number two."

This is the family's first song together although Dave is no stranger to the music business.

The new album was recorded during lockdown. Having appeared last year on TG4's Réalta agus Gaolta, the talent show hunting for Ireland's most talented family, the Mahers rendition of Olly Murr's Dance with Me impressed the audience. However they just missed out on being declared the winners.

Back 41 years ago, Dave and his own family appeared on the well known UK talent show Opportunity Knocks, winning top prize.

Lullaby for the World is available on iTunes and Amazon.

Check out the song below


If you have a story or want to send a photo or video to us please contact the Derry Now editorial team on 028 7129 6600 for Derry City stories Or 028 7774 3970 for County Derry stories. Or you can email editor@derrynews.net or editor@derrypost.com at any time.