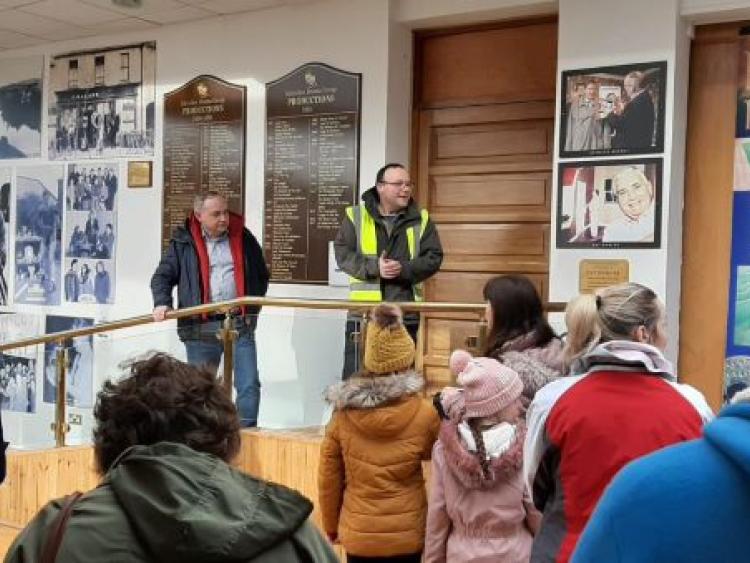 Paddy Sheridan in full flow at a nature event in Kilcullen

The late Paddy Sheridan of the Wild Kildare group is being mourned by his heartbroken family and friends but is also remembered fondly by thousands others who crossed his path and became enthralled by his love and knowledge of nature around him.

A resident of the Enfield area, Paddy had a boundless passion for wildlife, and was extensively knowledgeable about the natural world around him.

His curiosity about the bogs, fields, woods, lakes and rivers meant he was always learning something new.

Described by one friend as ‘the David Attenborough of Kildare’, Paddy was a natural teacher and had endless enthusiasm of his subject to pass on those who were fortunate enough to be in his company.

His Funeral Mass in The Church of the Nativity, Newtown, near Enfield last month heard that family and friends were very important in Paddy's life.

As well as his abiding interest in the seasons of the year, he loved GAA and soccer and worked tirelessly with local clubs.

The Requiem Mass heard Paddy was also passionate about other interests such as music.

“He loved birds, moths, bats — you name it, anything that flew!” - his brother Michael told the small congregation due to Covid-19 restrictions.

Paddy contributed to the Leinster Leader in the past year on several articles where we relied on his breadth of knowledge on any topic we would contact him about.

In an interview in May, Paddy said he relished the fact that families availing of daily exercise due to the Covid-19 lockdown, coupled with the summer-like weather, had awoken everybody’s interest in the wonderfully diverse nature around us.

Paddy was grateful that people had the time and space to explore local areas they might normally speed past in a car on the school-run or going to the shops.

The Wild Kildare nature group on Facebook had reported a surge of interest from members of the public wanting information on new species of bird or varieties of flowers they had discovered.

Paddy said at the time: “The onset of Covid-19 has had a dramatic impact on people’s lives. Gone are the hectic daily routines of work and school. Socialising and recreation has stopped completely. Add in the current lockdown restrictions and it doesn’t leave the public with much to do.”
Paddy added that people are out walking off the beaten tracks which is good for our physical and mental health.

“This less hectic activity has afforded us with more time to look around us and notice nature. It seems to seasoned nature lovers that the nation has suddenly awakened to the joy of a bird singing or a butterfly fluttering past.

He went on: “Somehow looking and listening to the natural world has brought some peace to the public in these uncertain times.”

Paddy also commented that with less people and traffic out, wildlife has taken advantage of being left alone and are being given the opportunity to thrive somewhat.

He added: “The vast reduction of vehicles on our roads has surely led to there being far fewer animal and bird fatalities.

“Reduced cutting of grass verges in both urban and rural settings has allowed wildflowers to bloom providing much needed food for our pollinators (bees, butterflies, moths, hoverflies etc), many of which are in serious decline and on the brink of extinction.
“This in turn provides food for other species further up the food chain such as birds.
“There have been many comments on how noticeable bird song has become over the last few weeks. Some even suggest that it is louder. The simple answer is that with the reduced noise of traffic and businesses, they can be heard. If anything, they are singing less loudly because they don’t need to overcome these noises.
“If we are to learn anything from this experience is that mankind needs to work in tandem with nature for us to survive on this planet.
“Will some join a nature and conservation group like Wild Kildare and actively help record and conserve species and their habitats in Co Kildare?”

Paddy was also passionate about moths and despite the Covid-19 restrictions, Paddy and his Wild Kildare volunteers were busy trapping moths at sites in every one of the 28 10km squares in the county.

He was happy that they had recorded many species that had never been recorded in Kildare before, including some that were nationally rare.

During the year, Paddy also called for the car park at the Hill of Allen should be opened to visitors by appointment with its owners, Roadstone.

Paddy said that the volcanic hill near the village of Allen is ‘alive with wildlife’ and should appreciated by the public, including small school tours.

Paddy told the Leader: “The Hill of Allen has red squirrels, pine martens and is a known habitat of butterflies.

“All along the public pathway you have great biodiversity which should really be enjoyed by everyone. It is certainly a unique flora and fauna which is of great interest.”

Paddy's encyclopaedic knowledge also extended to the Golden Plover birds, thousands of which come to the Curragh every winter from the colder north.

As well as this protected species, Paddy told the Leader in October: “It is one of the most impressive sights in Kildare to see thousands of Golden Plover wheeling around in the winter sunshine over the Curragh.”

Paddy called for designated sanctuary areas on the Curragh where Golden Plovers feed.

Patrick (Paddy) Sheridan is survived by his wife Sandra.

He was the loving son of his mother Eva and adored brother of Michael, Imelda and Oliver. He is also deeply regretted by his mother-in-law Mary White, sisters-in-law Tina and Caroline, brother-in-law Ultan, uncle, aunts, nieces, nephews, relatives and his many friends.

Paddy reposed at his family home and a private family funeral took place in The Church of the Nativity, Newtown. He was was laid to rest afterwards in Jordanstown Cemetery near his home.