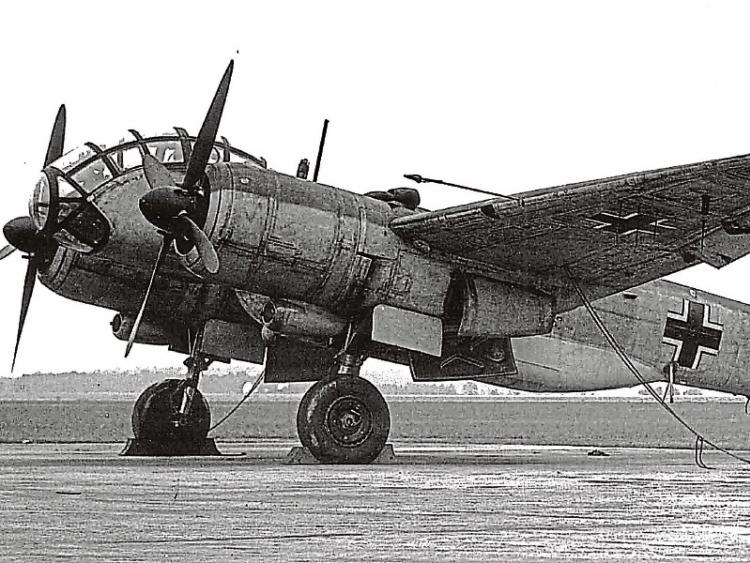 A German Junckers Ju-188 warplane — one of the most common Nazi warplanes of the period.

It was a New Year’s gift as unwelcome as it was unexpected. In the early hours of January 2, 1941, as the people of Newbridge slept under the thin security blanket of Irish neutrality, a stray Nazi plane droned overhead and unleashed a torrent of bombs to the west of the town.

High explosive projectiles plunged earthwards, scouring craters in the ground on the edge of the Curragh racecourse and in the pastures of Ballymany Stud.

Separately a slew of incendiary bombs lit up the night sky as they fell to the south of the town on to the fields of the Cox farm at Walshestown, setting a valuable stock of hay and straw on fire.

The New Year’s present from Hitler’s air force could have been a lot worse. There was no injury to man or animal in the Newbridge area. Had the bombs fallen a mile to the east — just a minute’s flying time away — the town could have been all but annihilated.

The tragedy of the North Strand bombing in Dublin the following April, when German bombs killed 30 people (including the young Browne family from Edenderry), injured scores, and damaged hundreds of houses, showed the devastation which high explosives could bring to urban streetscapes.

As it was there was tragedy in a neighbouring county that night. All over Leinster, errant German bombers had dropped their deathly payloads at random over the countryside. One stick of bombs straddled a farmhouse on the slopes of the Blackstairs mountains in Co Carlow. Three female members of the Shannon family were killed instantly.

Although the de Valera government had imposed strict wartime censorship, the Leinster Leader datelined January 4, 1941, carried complete details of the Newbridge incident. The paper’s Curragh correspondent reported that: “ …about 6.45 on Thursday morning an unidentified aeroplane approached from a north-easterly direction and dropped incendiary bombs at Walshestown, Newbridge, and one and a half miles from the Curragh Camp.”

An eyewitness, Mr Joseph Dunne, was quoted as saying that the falling incendiaries resembled ‘shooting stars’. Witnesses said that the plane approached from ‘the Naas direction’ and some said they heard small explosions followed immediately by flashes.

The private fire brigade from the Irish Ropes factory in Newbridge and the town’s Air Raid Precautions volunteers responded to the incident.

The Army fire brigade from the Curragh was summoned to the Cox farm, and succeeded in confining the conflagration to the haggard, but about 200 tons of hay and straw were destroyed.

However, the military at the Camp did not go on alert otherwise, and even if they had there was little they could do — so poor was the Army’s wartime inventory that that the camp and its thousands of troops were not protected by anti-aircraft guns.

The incendiaries — of a type which had started terrible fires in the London Blitz — scattered all over Walshestown. Others fell adjacent to the home of Mr Patrick Sheridan, but did no material damage.

Of potentially more serious consequence were the eight high explosive bombs which dropped in the Ballymany area. Three fell on the Curragh lands between the racecourse and Ballymany Cross, kicking up big craters at least 40 feet wide. Five more fell on the paddocks of the Aga Khan’s Stud at Ballymany where incendiaries also impacted.

Gardaí from Newbridge and members of the Local Security Force combed the district during the Thursday looking for any further traces of bomb impact.

The damage was confined to the severing of a water pipeline at Ballymany Stud, some damage to sheds, and the gouging of deep craters in its paddocks and the adjacent Curragh plain.

But the searchers made a startling discovery. They found that one of the bombs had not detonated and it had embedded itself six feet deep in the Ballymany soil just yards from the house occupied by Mr James Hayde, steward and stud groom to the Aga Khan.

As Thursday wore on, the national press sought reports from the site and in the Irish Independent of the Friday morning a column headed ‘Droichead Nua — Fire Bombs dropped’ by an Irish Independent special representative reported that ‘A cordon was thrown around the unexploded bomb, and military experts began digging it out in order to render it ineffective’.

The skill and bravery of the Irish Army bomb disposal officers was impressive — approaching a bomb laden with 250kg of explosive, and with sophisticated German triggering mechanisms that they would not have encountered before, must have required nerves of steel.

They dismantled the bomb without incident, but in the process made a discovery which would have international ramifications in the tense relationships between neutral Ireland and the warring parties — the bomb casing carried inscriptions which were in the German language.

Although there had been a handful of bombing incidents over Ireland since the war had begun in 1939 — including the destruction of a creamery in the village of Campile near New Ross which killed three women workers — there had been no objective proof of the source of the bombs.

The Government of Eamon de Valera was highly reluctant to make allegations as to whether the bombs were British or German — although the likelihood was the latter — until forensic proof was found. Now there was literally a cast-iron guarantee of attribution — the markings on the unexploded bomb at Ballymany were clearly German.

Before the day was out, the head of the Department of External Affairs, Joseph P Walshe (who had taught for three years at Clongowes Wood Jesuit school) had telegrammed the Irish representative in Berlin, William Warnock, telling him that an aircraft had dropped bombs with ‘German markings’ at the Curragh.

He ordered Warnock to make a ‘vigorous protest in regard to the Curragh bombing’ and point out how such incidents had a detrimental effect on relations between Ireland and Germany.

By the following evening, intelligence reports compiled from Irish coast-watchers and observers inland had built up a picture of hostile air activity over the Irish sea, and Walsh interpreted where the Curragh aircraft had fitted into this picture.

Furthermore, the evidence from the Curragh bombs that the weapons were of German origin was bolstered by similar markings found from bombs dropped the same day in Co Meath.

He telegrammed Warnock in Berlin, reporting that ‘the evidence found at Duleek, Julianstown, and the Curragh, coupled with the fact that these bombings coincided with a German raid on Merseyside… makes it only too clear that German planes are responsible’.

His sensitivity about not upsetting the Germans was put aside as Walshe ordered Warnock to make a strong protest to the Reich government:

‘You must make an energetic protest at once at continued violation of our air-space...’

And he headed off predictable German counter-propaganda by making it clear that ‘any idea that the German bombs were dropped by British planes is untenable’. 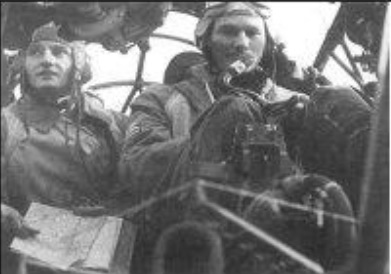 A German bomber crew on a mission in 1940

However, the Germans were not taking the accusation without challenge and Herr Hempel — later in January Herr Hempel the German Minister in Dublin — told Walshe that his government were not convinced that the bombs were theirs. He wanted permission to bring a munitions expert over from Germany to examine the fragments.

But Walshe was concerned that this was a German attempt to get a messenger over who would make contact with the IRA. He countered by suggesting to Hempel that some of the German airmen interned in the Curragh Camp — coincidently within a mile of the Ballymany bombing — might be able to examine the projectile and determine its origin.

Hempel argued back that the interned airmen would not have the technical skills necessary to verify the origin of the bomb.

Their exchange seemed to be going nowhere until the Jesuit-trained Walshe came up with a proposition that would suit all parties — the Germans would admit publicly that it was one of their bombs but it had worked itself loose from the airplane in flight and had not been dropped deliberately.

Although the Ballymany bombing was minor in terms of its material impact, it marked a step-change in Ireland’s relationship with at least one of the belligerent parties.

The ‘fog of war’ would no longer be accepted as an excuse for denying responsibility for any further bombs that would fall on Irish territory.