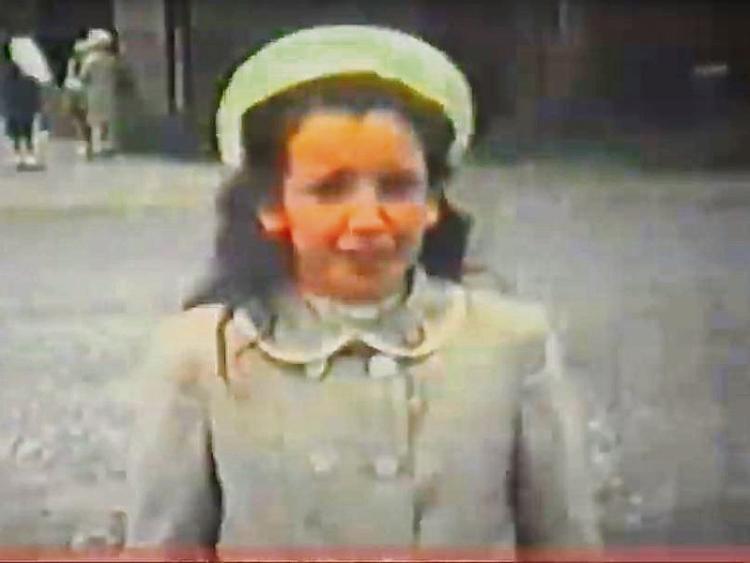 An unidentified girl making her confirmation in 1964

Locals in the Kildare town area used the opportunity of having more spare time in recent weeks to treat themselves to a glorious trip down memory lane with grainy old footage dating back nearly 70 years.

For Heritage Week 2020, Cill Dara Historical Society re-released highlights of its Reeling in the Years DVD which is a treasure trove of nostalgia.

Events covered included the Presentation Schools’ Drill Displays in the 1950s and 1960s, the Derby House Hotel fire in 1968 and the Corpus Christi Procession in 1964.

Also featured is the Confirmation in 1964, a CYMS outing in 1964 and Rowanville Residents Christmas parties in the late 1960s.

Local men are seen working in the Kildare Wallpapers factory on the Monasterevin Road.

Another segment is the ‘Mass on the Green’ at Assumpta Villas estate.

The Gannon family are recorded cutting turf in the bog while the Magee Barracks Around The Bucket Charity Run is also seen in the 1980s.

Children at the French Furze Riding Stables are also featured in the 1970s.

Founded in 1989, Cill Dara Historical Society — Kildare Town’s local history group — aims to foster and maintain an awareness and appreciation of the history and heritage of the town and the wider community.

The group, which meets every month, also organises a series of public talks on a wide variety of history and heritage related topics for members and newcomers.