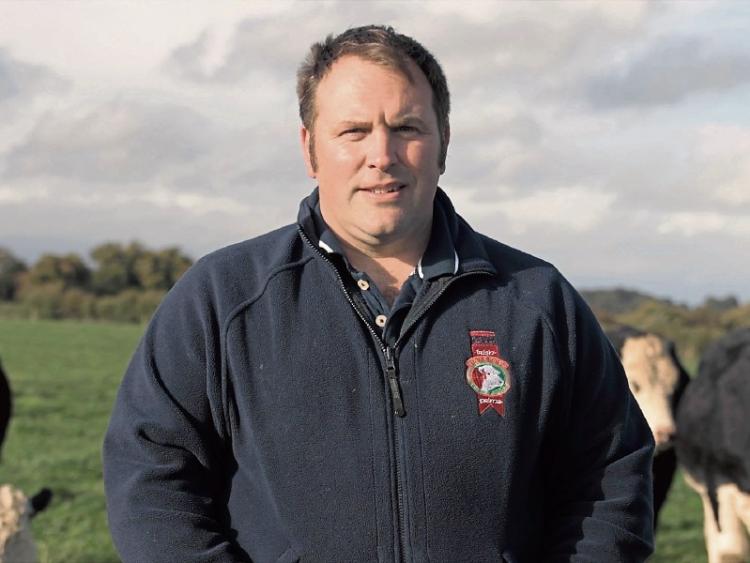 Richard Milligan, who farms in partnership with his father Henry near Robertstown, has been awarded the 2020 Irish Hereford Prime Farmer of the Year award.

The Milligans farm approximately 24 hectares of grassland around the yard and a further 40 hectares nearly two miles away, some of which is in tillage.

Richard studied at Harper Adams Agricultural college in the UK and after graduation took up a number of farm manager jobs, predominantly on tillage farms, giving him a strong broad range of experience to bring home to the family farm.

Having played rugby in school and college Richard enjoys watching rugby whenever he can — however, being a full time farmer with a young family, he doesn’t have much free time.

There is a long family history of farming in the area. Richard’s great-grandmother and grandfather bought the farm in the 1930s. This farm makes up part of the land he farms today and Richard is hopeful the farm will continue to stay in the family for generations to come.

Like all beef famers Richard finds the realities of farming tough and would love to see the negative publicity towards the beef sector shift and feels there is a need to inform and educate the public more regarding food and beef production in Ireland.

Richard appreciates the on-farm support he receives from Irish Hereford Prime and is fully supportive of the recent Hooves4Hospice campaign as it is such an important worthwhile cause and the calendar produced to raise funds is a great way to showcase Hereford farmers.

Richard is looking forward to spending some time with his young family over Christmas but like everyone will miss seeing extended family and friends.

The father and son team runs two Hereford stock bulls with their 40 cows plus replacement heifers in a suckler to beef spring calving herd. They also have used Hereford AI on maiden heifers and selected cows to increase the ICBF Euro Star Values of their breeding stock in previous years.

Currently, there are 10 Hereford cross heifers in calf to an easy calving Hereford bull in a hope of increasing cow numbers from within the herd. When asked “Why Hereford?”, Richard and his father Henry instantly reply that “the ease of handling and finishing of Hereford cattle combined with the ease of calving and the high level of calf vigour at birth are proving to be very positive for our farm”.