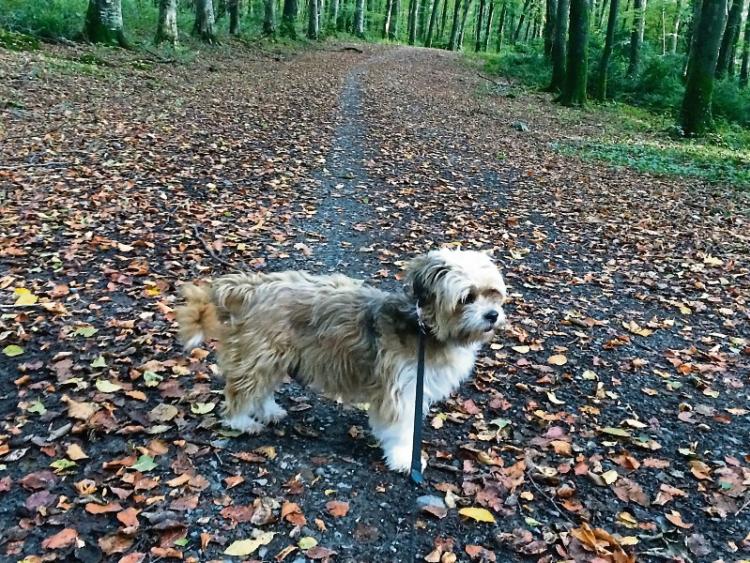 For times like these, you need your best friends. Meet Suzi and Summer — my lockdown companions.

Unlike the rest of us, these two mammals seem completely oblivious to pandemics, case numbers, self isolation and nasal swabs.

We’ve had more than our fair share of claustrophobic lockdowns in Kildare and you take a bit of joy and freedom anywhere you can find it.

Watching dogs get such unadulterated bliss from a ten minute walk, or a juicy pork chop from your dinner plate — well, there’s a free mindfulness module right there for us non dogs.

And how they sleep! They could teach us a thing or two especially these nights, I can tell you! I have a photo on my phone of one evening at the beginning of all this, Leo gave his big speech on RTE, the half-scary one about the ‘calm before the storm’.

In the photo, you can see Leo in his good suit spelling it all out and there they are, the two asleep on their memory foam bed, Suzi snoring and Summer’s doing this thing where she sleeps on her back with her legs in the air!

They might as well be saying: ‘Why the long face Leo?!’

Pets, they’re like babies or toddlers aren’t they? Their unconditional love and enthusiasm about everything — all waggy tails and please-give-me-a-walk eyes.

And, of course, everybody else’s dogs are much more scruffy and annoying — because yours are angels!

Being confined to barracks for long weeks, I found myself watching more nature programmes: endangered rhinos in Borneo’s forests or ring-tailed lemurs in Madagascar. I’m intrigued by the extraordinary lengths that mammals have to go to to find food every day.

And here is Suzi and Summer spoon-fed their Tesco Beef and Rice from a can twice a day!

We always had dogs when I was young, scruffy mongrels who would help bring in the cows for milking and act as guard dogs to bark at strangers who weren’t really strangers but were actually neighbours, or the postman — who ended up having their car tyres irrigated by the dogs.

You see, I’m a dog lover but I’m not a fool. I see a lot of people kissing their pets. Not for me.

I’ve brought them on enough walks to know that their noses and mouths spend a lot of time stuck in other dog’s dirty business. Or discarded whiffy food. So I draw the line there.

Suzi has an unusual back story as she was found wandering the streets of Kildare town about eight years ago now.

Several attempts were made to find her owners with posts on Facebook and through WhatsApp — to no avail.

But we took her in and treated her as one of our own, half-dreading that some day we would get a phone call or knock on the door from somebody saying they were her owners.

In the early days, maybe she was lonely because she ran away a few times, perhaps looking for her rightful home.

We’d wish she could talk or give us a clue as to where she came from.

But in the end she stayed and if I was a dog and I was her, I don’t think I could have found a better home!

Looking at Summer now, you wouldn’t believe she had a difficult birth — on the last day of summer, hence her name.

And her mother rejected her. Twice.

I remember it clearly. It was obvious for several days that Suzi has about to give birth, and even though I had prepared a makeshift ‘maternity ward’ area in the corner of the kitchen, she burrowed her way deep under the garden shed and stayed there one night.

She had her pups there, in the wet and dark, one Sunday morning. In an effort to help her, I carefully took up a couple of floor boards so she could climb up and down to get food and water.

I peered down and could make out about five tiny, slimy pups. Some black and white and one light brown and white.

All completely helpless and dependent on their mother as they searched blindly with their mouths for her milk.

I left them in peace for a few hours but when I returned,

Suzie had dragged one pup through the floorboards — the brown and white one — and basically dumped her outside the shed. I couldn’t understand this.

Why would she reject her own young?

I carefully placed the pup back with the rest. Suzi sniffed the pup and then, determinedly began to haul her back through the floor boards again. I stopped her.

Why? I shouted at her in disbelief like a grouchy midwife and she stopped.

This pup was Summer. And in the harshness of the animal world, Suzi had seen something to single her out as the weakest of the litter — but now she is spending her life with her, healthy and happy as ever!

As Summer grew up, all the phrases you ever heard suddenly come back ringing in my ears — cheeky as a pup, ‘bould’ as a pup, hungry as a pup.

A walk through the rolling Curragh plains when I can take them off the leads, is pure joy.

A sniff of a rabbit burrow here, a scratch of grass there.

The sense of freedom and carefree abandon they exude is infectious, and a lesson to us all.

I find myself really breathing in the air and admiring random things like the sheer stubbornness of gorse bushes.

And when I look up — the distant horizon of the Wicklow mountains. I’ll add them to the post-Covid Bucket List after all all the lockdowns fade into distant memory.

Now, where do I sign up for vaccines for dogs?