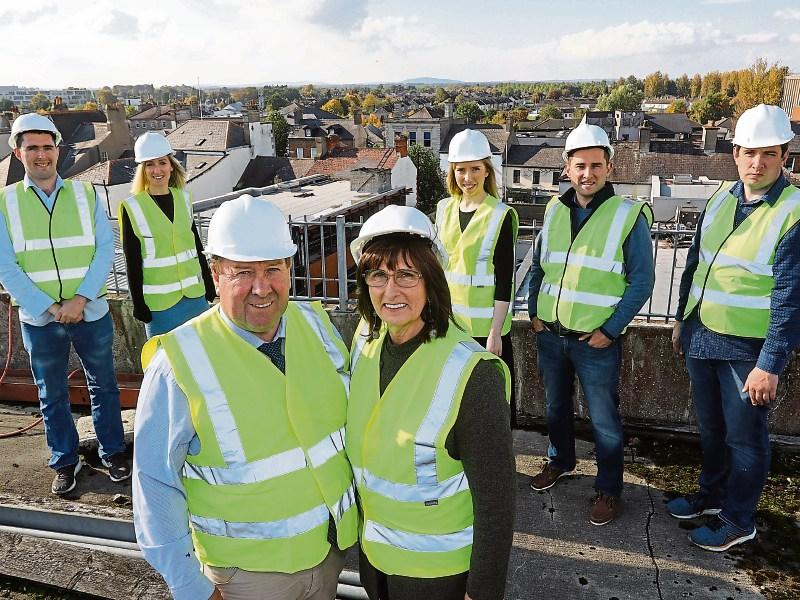 The Roche family pictured on top of the Naas SC building

At least 700 jobs are now expected to be created at the Naas Shopping Centre and plans are well underway for the completion and a significant fit-out of the four acre site in the town centre.

This was confirmation in November of an article which appeared in thes pages in October and work has already started on the huge site which reportedly remains  in very good condition.

The site and structure is currently being fully cleaned, sealed, made safe and prepared for tenants.This preceded a planning application likely to be lodged with Kildare County Council in the first quarter of next year following pre-planning consultations — a normal feature of a major planning application. Development works are expected to cost in the region of €10m and will employ 150 construction workers at the peak of works.

The site is owned by Ger Roche and his family’s Roche Group. They have put together a  project team which is led by Ger Roche with engineer Frank O’Rourke (the former Fianna Fail TD in Kildare North) as project manager.

The site has been vacant since  2008 when it was close to completion.It also includes the  Forge Inn licensed premises on South Main Main Street, the nearby  Five Lamps pub and a property at  50 Main Street.

It is anticipated that the construction and fit out of the property could be fully finished by late 2022.

The structure will be converted to accommodate a range of mixed-use occupiers ranging from retail outlets with a supermarket anchor on the ground floor, mixed healthcare, office and educational uses on the upper floors with approximately 70 apartment units for senior citizens.

The development also had planning permission for 750 car parking spaces.