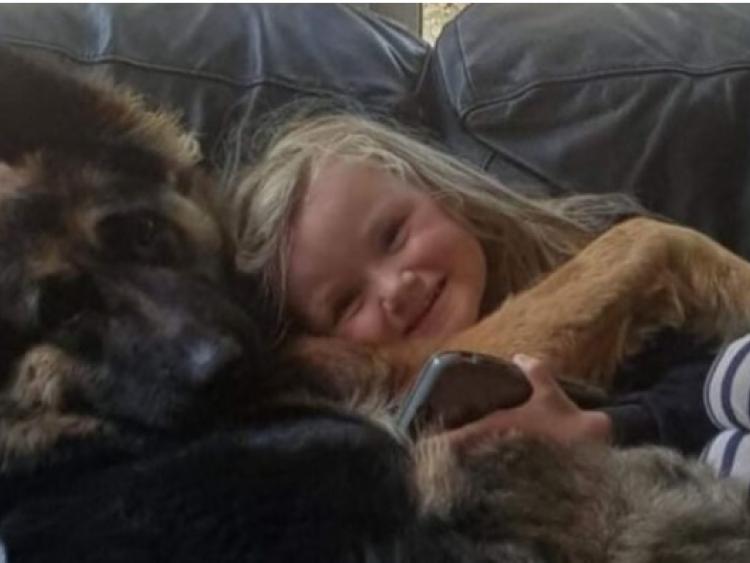 Five year old Annabelle with one of the pets which died

The blaze caused extensive damage to the three bedroom house at Donadea rented by Abbie Nolan, who lived there with her five year old daughter Annabelle.

Abie’s 65 year old dad had also been living with the family recently.

Mother and daughter and granddad Alan were visiting her brother Curtis in Longwood  for Christmas but four family pets - two German Shepherd dogs and two cats - died as a result of the fire, which is believed to have started in the kitchen area.

Alan made the grim discovery when he went back to the house a day later.

“They have been effectively left without a home and for now they are staying in my  place,” said Annabelle’s aunt, Anne O’Brien.

“We are trying to raise money through a gofundme page to get the family back on their feet. We are all hugely relieved that they weren’t in the house when the fire started,” added Anne.

She fears that it will take time for Kildare County Council to source alternative suitable accommodation and this process hasn’t even started because of the Christmas and New Year break.

The property was extensively damaged in the blaze and while the roof remains intact fixtures and fittings and the family belongings will have to be replaced.

“Some of Abbie’s clothes survived fairly intact but little else and books and school equipment used by little Annabelle were destroyed.”

Abbie only started school in the junior infants class at Staplestown national school a few months ago.