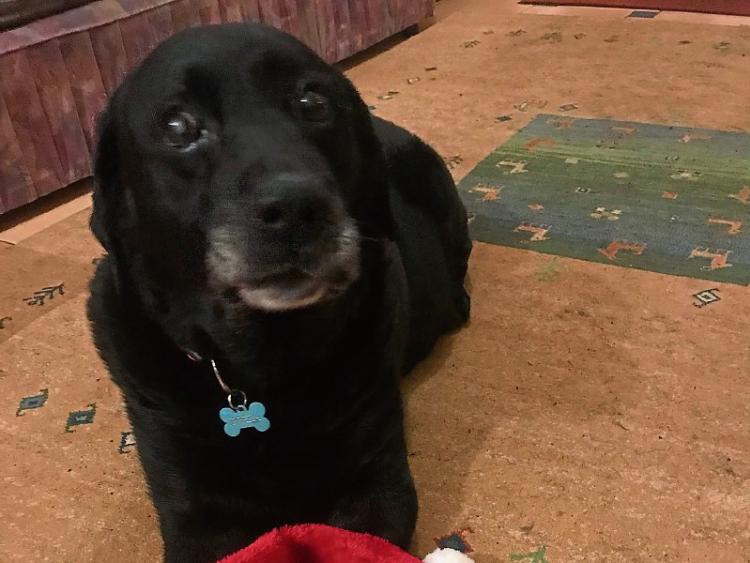 A happy Christmas for Gunner

The KWWSPCA welcomes the increase in funding for 2021 from the Department of Agriculture, Food and the Marine which was announced recently. The Society would like to thank Minister Charlie McConalogue and his Department for this increased grant and their commitment to improving animal welfare in Ireland.

This financial support is very welcome in these difficult times and helps the KWWSPCA to continue its vital work caring for cruelly treated, neglected and abandoned animals.

The KWWSPCA does not like to rehome dogs or cats so close to Christmas. Even this year, when Christmas will be smaller and quieter, it is still not a good time to introduce a new pet into a new home. So, there is no ‘Dog of the Week’ this year.

But we would like to tell you about Gunner, who is preparing to have wonderful Christmas in is new permanent foster home.

Gunner is a 16-year-old labrador who was surrendered by his previous owners to a dog pound recently, and the KWWSPCA took him into our care. Despite his age, Gunner is very healthy. His main issue is that he finds it difficult to stand up as his legs slide sideways from underneath him. He needs to be hoisted into a standing position but once he gets going he loves to hobble for about 200 metres which takes him about 20 minutes.

He got excited recently and tried to run but the poor chap just fell over. It did not bother him as he was picked up and he carried on.

He spends his days snoring loudly in his bed and having a few toddles around the garden plus takes his ‘long’ 200 metre walks.

He will spend the remainder of his senior years in a permanent foster home with two of our volunteers. He was not impressed at the idea of a Santa hat and decided to try eating it. Like all labradors, he loves his grub — but not Christmas hats!

The Kildare & West Wicklow Society for the Prevention of Cruelty to Animals (KWWSPCA) is a Registered Charity (Number CHY 6280) which investigates and deals with reports of cruelty and neglect to animals, family pets, wild animals and birds, horses and ponies, throughout County Kildare and West Wicklow.

The Society is run entirely on a voluntary basis, there are no paid employees. It runs a very successful charity shop in Newbridge, Noah’s Ark, which provides a large proportion of its annual income.