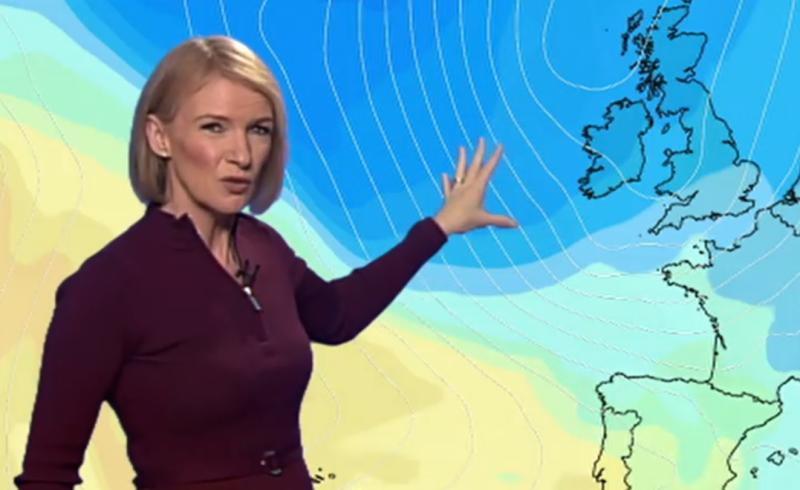 Met Éireann is warning of 'heavy wintry showers' to include sleet and snow and has also raised an alert for much colder weather for the rest of the week which includes sharp to severe frost.

As Ireland emerges from the Covid-19 lockdown parts of the country could end up being weather restricticted in the coming days.

The forecaster issued a Weather Advisory on Tuesday, December 1. It warns of much colder weather for the rest of the week with sharp to severe frosts and icy stretches with some wintry showers too. It is in force from 4 pm on Wednesday, December 2 to midnight Friday, December 4.

The forecaster is also warning of wintry weather though to the weekend. The official outlook is for cold and unsettled with blustery showers bringing a wintry mix at times.

In her weather forecast on RTÉ Met Éireann meteorologist Joanna Donnelly explained what is happening. She said it has been milder than typical for late November but this will change in December's first week with much colder air coming down over Ireland from the north swept along by strong winds that will make it feel even colder from midweek.

"So, from Thursday on under those significantly colder air temperatures, we might see some precipitation turning wintry in nature. That is a mixture of sleet and snow mostly over the high ground...but down to lower levels also particularly on Thursday night when it is going to be quite cold," she said. MORE BELOW TWEET.

Here is our 10 day Atlantic Chart, showing the pressure and precipitation forecast in 6 hour intervals.https://t.co/9Giuj4CR5mhttps://t.co/9gKN6SVok4 pic.twitter.com/veChhoxhY0

NATIONAL FORECAST
Issued at 9.14 am on Tuesday, December 1.

Tonight will be cloudy with scattered outbreaks of rain and drizzle sinking down from the northwest. Lowest temperatures of 4 to 7 degrees Celsius. Westerly breezes will freshen later in the night.

WEDNESDAY: Lingering overnight rain will clear the east and southeast early Wednesday morning. Largely dry elsewhere with sunny spells. However, blustery showers in the northwest will gradually become more widespread through the day. Some of the showers will be heavy with the risk of hail, especially across the western half of Ireland. Feeling cold in a fresh west to southwest breezes. Highest temperatures of only 5 to 8 degrees Celsius, coldest across Ulster.

Widespread showers will continue on Wednesday night, merging into longer spells of rain in the southwest. Some showers will be heavy with hail and possibly thunder, and may turn wintry on high ground in the northwest. A cold night with lowest temperatures of -1 to +3 degrees in moderate southwesterly winds.

Thursday: Thursday will be very cold with widespread heavy showers or longer spells of rain. There will be a risk of hail and thunder and some showers may turn wintry on high ground in the west. Showers will retreat to western areas through the afternoon, with drier, brighter conditions elsewhere. Temperatures will only reach between 3 and 5 degrees so feeling very cold. Winds will be light to moderate, from the west or northwest.

On Thursday night, wintry showers will mostly retreat to western coastal counties. Many areas will be dry with clear spells and a sharp ground frost leading to some icy patches. Lowest temperatures of -3 to +2 degrees, coldest in Ulster and Leinster.

Friday: Friday will be another cold day. Dry and sunny in many areas during the morning, with showers in coastal parts of the west. Some of those showers will be heavy and possibly wintry. Cloud will increase in Ulster and Leinster later, bringing widespread showers or longer spells of rain, falling as sleet on higher ground. Temperatures during the afternoon will only reach between 3 and 6 degrees and there will be an added wind chill too as fresh to strong northwesterly winds develop.

Showers or longer spells of rain or sleet will continue in Ulster and Leinster on Friday night but it will be drier in Connacht and Munster, with some clear spells here. Not as cold as Thursday night with lowest temperatures of 0 to +4 degrees, but it will remain breezy with fresh to strong northwesterly winds.

Saturday: On Saturday there will be further showers in the west and north, but largely dry with sunny spells elsewhere. Breezy at first with fresh to strong northwesterly winds, but winds will ease through the day. Staying cold with afternoon temperatures between 5 and 8 degrees.

Many areas will be dry with clear skies on Saturday night, but showers will continue in the northwest. Cold and frosty in the east with lowest temperatures of -2 to +1 degrees. Minimum temperatures of 2 to 5 degrees further west.

Sunday: Sunday will be another cold day with scattered showers and sunny spells. Highest temperatures of 4 to 6 degrees with light to moderate northwesterly winds.

Further outlook: Remaining cool and generally unsettled for the early days of next week.