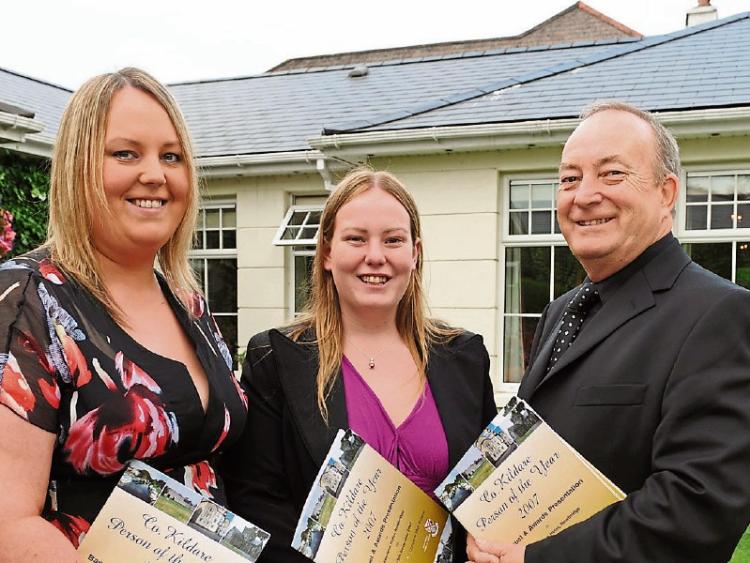 Matt pictured with his daughters Edel and Laura

Flamboyant, charismatic and totally irreverent, along with a generous heart and possibly the most positive person I ever met —that’s how I would describe the late Matt Browne.

My association with Matt Browne began in the early 2000s when I was ‘roped’ into ‘doing a bit of PR’ for the Kildare REHAB People of the Year awards.

Thanks to Matt, along with Seamus Morahan (former Advertising Manager of the Leinster Leader/sponsors of the awards) and Vincent Kelly (former Area Manager REHAB/award hosts) — the latter pair were founding members of the organising committee — the Kildare POY Awards had become a victim of its own success and merited far more planning and pomp than previously.

Matt’s daughter Edel brought a planning balance to the committee but both Vincent and Seamus recall it was Matt’s persistent positivity that kept the show on the road.

Aubrey McCarthy accepted the county award in 2017 for his work with Tiglin addiction services. This was the last year of the awards with Matt always hopeful to reignite the event.

Speaking to the Leinster Leader, Mr McCarthy noted: “I saw this posted on Matt’s FB page recently: ‘The value of a man or a woman resides in what he or she gives, not in what they are capable of receiving’. That’s not a bad premise to remember him by.

“We were extremely sad to learn of Matt’s passing. He was a larger than life character who always had a word for the listening audience, with his striking debonair style and wonderful borderline sense of humour!

“His approach to life was ‘always look on the bright side’, and he will be remembered for his community activities, most notably the Kildare People of the Year Awards, of which I was a recipient through my work with Tiglin. My condolences to Edel, and all the Browne family.”

“In 1989, Matt himself won the first Kildare REHAB POY award. Imagine, he had done so much work before then he merited the overall award,” said Vincent Kelly. “That’s 31 years ago and up until the pandemic, he was still fundraising and working for people. Think of all he achieved before and after 1989, and all the organisations and families who benefitted from his work”.

Vincent recalled how Matt had his leg amputated and yet, still managed to drive around the oceans of Ireland on a jetski! “I swear if someone said to Matt, ‘you won’t be able to do that’ — I can guarantee you he would do it and do it right!”

For Seamus Morahan, Matt’s death came as a total shock: “I was so shocked and saddened to hear of his death Sunday night. To his family and extended community friends, I offer my sincere condolences.

“My greatest memory of Matt is when he joined the Kildare POY committee in 2000 and the new dimension he brought, positive thinking! He never saw the negative in anything, he was always positive in his thinking and outlook. Aside from his own family who were a great asset in running the annual awards show, he brought a huge swell of supporters and had connections everywhere.

“He brought a great background team and they were there, year in, year out, setting up, dressing the stage, selling raffle tickets, gathering the prizes, running the cloakroom, etc. He had such loyal supporters and they gave 100% to the POY awards”.

For myself, Matt dying during Level 5 restrictions is a dreadful shame. Any other time, I could imagine Matt’s wake and funeral drawing a massive attendance, and would almost merit being run as a pageant.

There is no doubt in my mind that every entertainment celebrity, every community activist in Co Kildare, every politician from the local and national stage, would have encountered Matt or one of his shows along the way.

Speaking with Edel Curran, Matt’s eldest daughter, she stated: “He wanted a three day wake with non-stop music; he wanted his funeral to be used as a fundraiser, told us there was to be a bucket in his arms in the coffin so people could donate.

“’Let them celebrate my life’,” he said. ‘I will leave enough in the Credit Union for ye to host my wake and final send off’. That is what he would have wished, God love him.”

Edel, who was with him when he collapsed, stated the organ card in his wallet was so thin and frayed, he must have been carrying it for years. But sadly, owing to renal issues in recent times, Matt’s organs cannot be passed on to another.

“He suffered a massive heart attack on Sunday but he really wasn’t well in recent weeks and was likely to have started on kidney dialysis soon. But he was down here over the weekend for Halloween celebrations and he just loved the craic with the boys playing Kazoo!

“The last seven months were the worst in his life, he said, as owing to the pandemic, he could not socialise and get out and about. Every fibre in my father’s body was geared towards fundraising, he just couldn’t function without the buzz and being busy.”

Born in Prosperous, Matt live in Clane in recent years. Edel noted he always said: ‘I’m a Prosperous man, from a small village with big dreams’. Even the weekend before he passed away, he told his grandchildren never to give up on their aspirations, and to always reach for the stars.

“I took videos of them playing together last weekend as I knew he wasn’t well. But he went home a new man, he was elated and looking much happier after the evening playing Kazoo! We even had a Kazoo version of Bohemian Rhapsody and ACDC!”

“Everything Da did, he did with a bang, and in his time frame! A limited edition of ‘Putting The Fun Into Fundraising – the Matt Browne Story’ was printed but he wanted to amend and run a final version.

“There was so much he did over the years; he started the Irish Wheelchair Association in North Kildare with a committee. He did a deal with the HSE and secured a deal for a premises for one pound a year for 100 years. Hence the John Sullivan Centre was founded and named for the Jesuit priest, Fr John Sullivan.

“He pushed a bog barrow from Killarney to Clane and duly recorded a song to go with it in 1983.

“From 2000 onwards, after his leg was amputated, Vincent offered him a fundraising job with REHAB. There were also some serious treks across Australia, New Zealand, South Africa, Brazil, Canada and Italy, all in aid of REHAB. The biggest team on these global fundraisers was always from Co Kildare, with Da. Some people had never travelled outside of Ireland before!”

Edel also stated that Matt never bad mouthed anyone. He always saw the positive in everyone and everything and fundraising was so natural for him, and he would give his last euro to a worthy cause. 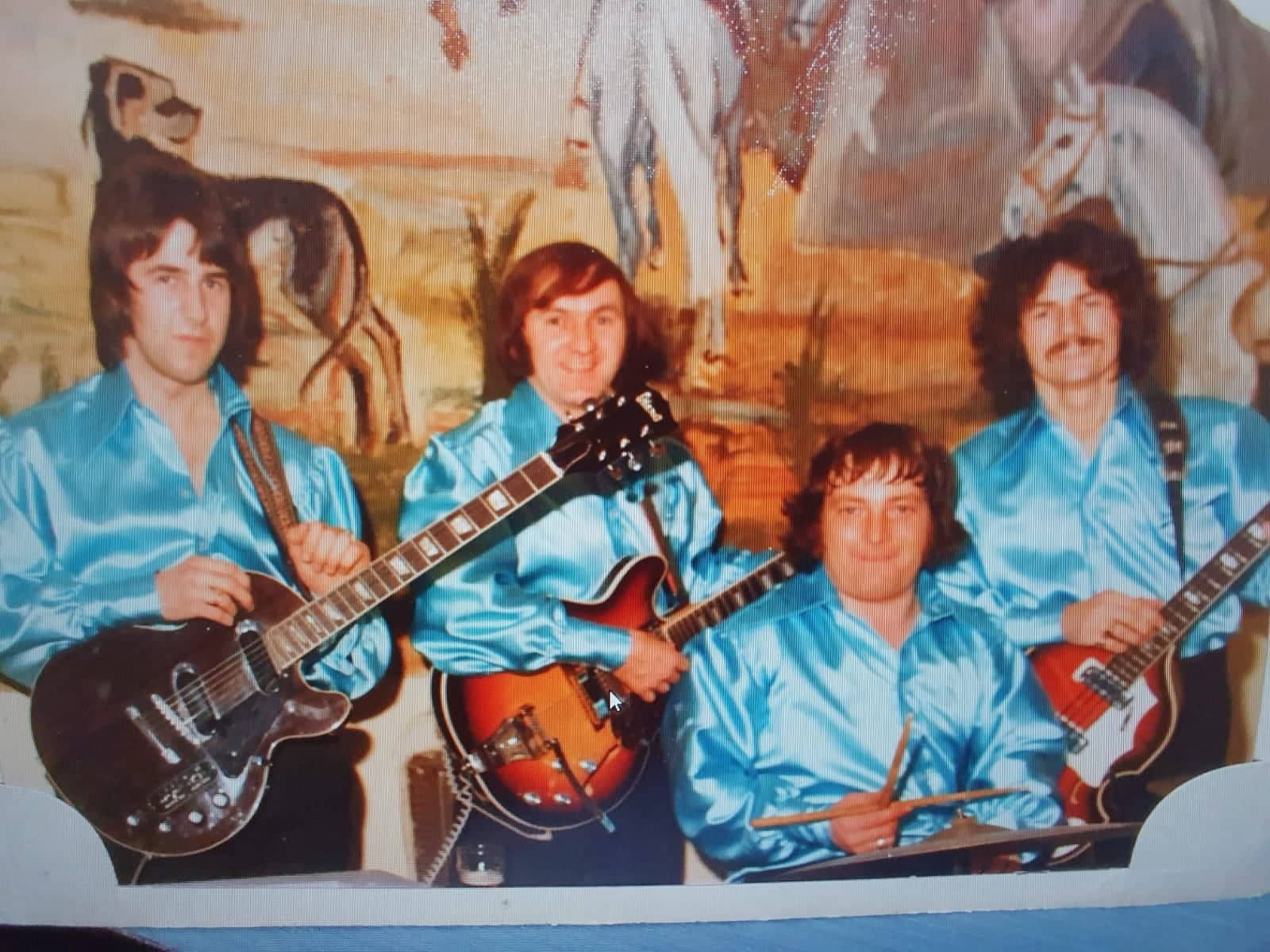 “Ever the show man, his entertainment career began with Vinnie Moran and his band. Vinnie’s wife was the drummer but as she was pregnant, Vinnie asked Da to take over the role. Vinnie ‘trained’ Da on the dashboard of the van on the way to the gig, and from then on, Da was the resident drummer!”

Edel also has heard the stories of Matt’s ‘Crazy Nights’ in Dagwelds years ago.

And for anyone who saw Matt run a Thorny Rose competition, a fashion show, a dinner dance, a karaoke, or the People of the Year Awards, well you always knew he was the showman and boy, did he put on a good show!

It was Matt via his connections who called in favours from everywhere to stage a glamorous, professions show.

On behalf of Vincent, Seamus, Nellie and PJ, former judges, may we extend our deepest sympathies to all Matt’s children, grandchildren and extended family, and to his many loyal friends and supporters.

He was a class act, in a league of his own, the late Matt Browne, RIP.

Matt Browne of Otomy Drive, Clane and formerly of Goretti Terrace, Prosperous, passed away on November 1 last, suddenly, at his residence. He was laid to rest at Mainham Cemetery, after a private family funeral, due to Covid-19 regulations, at St Patrick and St Brigid’s Church, Clane.