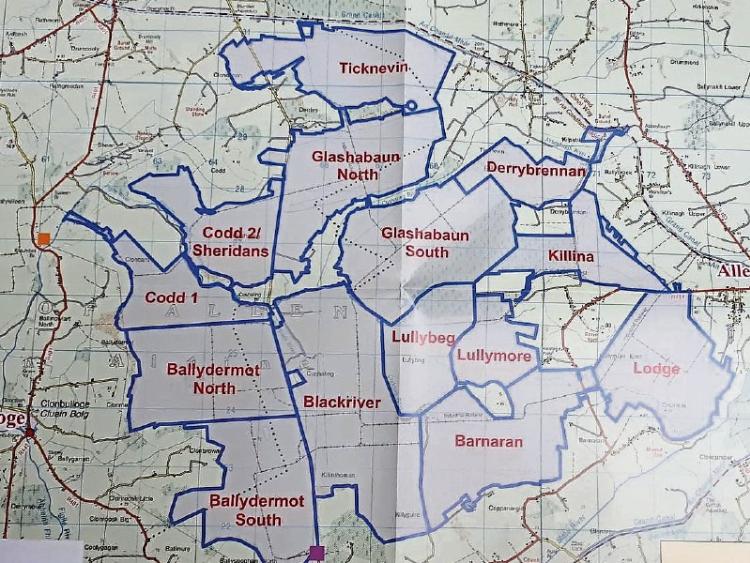 The proposed location for the Ballydermot wind farm

Bord na Móna has sent out information packs about a new wind farm proposal to households in Rathangan, Derrinturn, Allenwood, Edenderry and Clonbullogue.

The full details of the project, which is called the Ballydermot Wind Farm, have not yet been decided.

“As the project is at a very early stage the proposed location and height of the turbines has not been determined,” said Bord na Móna in the information pack. Due to the Covid-19 restrictions, community consultation clinics will be held by appointment only. These are due to take place in late November/early December in Allenwood, Clonbullogue, Derrinturn, Edenderry and Rathangan.

The proposed development study information is also available at www. ballydermotwindfarm.ie. This pack is being circulated to all homes that are within a 1.5km radius of the Ballydermot bogland.

A 12 turbine wind farm has already been given the green light for the north of the county.

More than 370 objections had been lodged against the 169m high turbines.

Drehid Against Wind Turbines said the total number of objections was higher than 370, with many locals opting to make their own submissions independent of the group. The Drehid proposal was originally submitted by Statkraft which acquired Element Power Ireland. Element Power’s previous 47 turbine Maighne Wind farm application was refused by An Bord Pleanála.