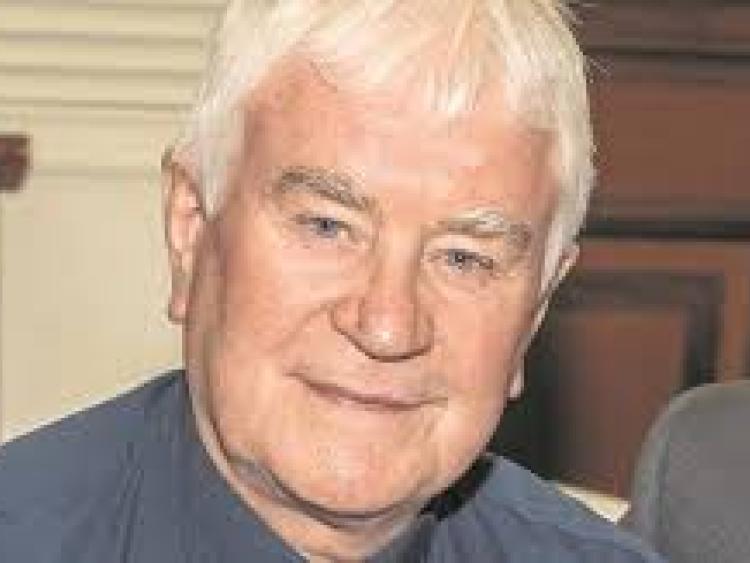 The funeral of Fr Jimmy Doyle will take place today.

Fr Jimmy, the parish priest of Staplestown & Cooleragh, died suddenly last Friday, October 23. His death came as a shock to all of those who knew and loved him.
A family funeral will take place at 12 noon in Christ the King Church, Cooleragh. The funeral Mass can be viewed using the link: https://www.mcnmedia.tv/ camera/christ-the-king -church-cooleragh. Due to Covid-19 restrictions, those who cannot attend are asked to light a candle in memory of the well-known priest.
Fr Jimmy passed away suddenly, last Friday, October 23, while out walking in his home place of Clonegal, County Carlow.
Fr Jimmy, as he was known to all, was well-known in GAA circles in county Kildare.
He retired from full-time ministry in Naas in 2011, where he had served for eight years, but returned to work in 2014 in Staplestown and Cooleragh.
Fr Paul O’Boyle in Clane said that Fr Jimmy spent almost 40 years in Kildare. “He was very supportive, kind, gentle and passionate about everything he did.”
Fr Paul said they were “deeply shocked” in Clane- Rathcoffey.
Fr Jimmy was ordained in 1974, at the age of 30.
He was initially assigned to the parish of Bagenalstown, Co. Carlow, where he spent seven years before being appointed to Newbridge in August 1981.
He also served in Broadford, Kilcock, Muinebheag and Sallins during his priesthood.
“Fr Doyle touched many people’s lives and will be greatly missed by everyone. May he rest now in his eternal home,” said his parish in a social media statement.
On the news of Fr Jimmy’s passing, Bishop Denis Nulty tweeted: “The prayers and thoughts of all of us in Kildare and Leighlin are with the sisters, nephews and nieces of Fr Jimmy Doyle. May his gentle soul rest in peace.”
In more recent years Fr Doyle worked in the west Kildare area.
Clane-based Cllr Padraig McEvoy said Fr Jimmy was very close to the elderly and sick.
He was especially good for visiting those who were confined to bed and were unable to get out about.
He was great for visiting people in hospital when he was chaplain in Naas General Hospital.
A nephew of the late Fr John Doyle, who served as parish priest in the parish of Clane in the 1970s, Fr Jimmy maintained strong connections with his native Carlow.
Cllr McEvoy said Fr Doyle was very good at supporting those who were poorer and disadvantaged in society. “He was a gentle, gentle man.”
Liam Holton, who worked with Fr Jimmy on the Staplestown-Cooleragh parish committee, said: “We are all heartbroken. It is like a death in the family. He was that close to us. Everyone is devastated.”
Liam said Fr Jimmy had been working very hard and had taken a few weeks off to stay with his sister. He was out walking when he was taken ill.
Liam said that it was poignant he was at his home place when he passed away.
Fr Jimmy, he said, was great at organising people. He set up a network of caring in the local community. “He was a remarkable man,” he said.
The Carlow native was well known in GAA circles, both Carlow and Kildare, and he loved watching Gaelic games.
Fr Paul told the Leinster Leader that Fr Jimmy used sit on seats at the town end of St Conleths Park.
He noted that Fr Jimmy played hurling and football for county Carlow and won a senior champship title with Kildavin in Carlow.
He was vice-president of Sarsfields GAA in Newbridge. “Fr Jimmy touched so many people’s lives and will be greatly missed by everyone in Sarsfields GAA and beyond. We extend our deepest sympathies to his family, parishioners and friends. May his gentle soul rest in his eternal home. Ar dheis de go raibh a anam,” said the club in a statement.

Community man
Liam Holton said a lot of Fr Jimmy’s work stopped when Covid-19 came along.
But he worked to make sure that people had contacts to visit if he could not do it himself.
Fr Jimmy united the parish of Staplestown and Cooleragh, said Liam.
He used to organise garden parties to raise funds for parish projects and they were attended by people like former Kildare manager, Mick O’Dywer and singer, Celine Byrne. “He was just a people person,” said Liam.
He left a legacy with the Tidy Towns, including organising rows of roses up the road towards Coill Dubh. “He was a flower maniac,” said Liam, who added that the church front at Staplestown-Cooleragh was one of the most beautiful in the country.
Liam recalled that Cooleragh was part of the Clane parish up to around 1970 and then the new parish of Staplestown-Cooleragh was created.
Fr Jimmy would have been the fifth parish priest of Stapelestown-Cooleragh, since it was created.
“He was here for six years but you would think it was a lifetime,” said Liam, acknowledging all the work that Fr Jimmy got through.
He helped get the Men’s Shed group going and created John PaulII awards for young people.
“We will miss him. He was a one man show. He inspired people. When he had a plan you had to go with him,” said Liam, adding that he helped create great unity in the parish.
Liam went on to say that Fr Jimmy did not confine himself to his own parish of Staplestown-Cooleragh.
He was a great help to other priests, supporting them when they needed it.
Liam said Fr Jimmy “always looked out for the underdog.”
He kept in touch with everyone.
When he was in Naas, he said a regular mass at Craddockstown Nursing Home in Naas.
He continued to say it after he was moved to Staplestown-Cooleragh.
Liam said he had a great relationship with his sister, Sister Margaret in Texas, who was able to see his masses on webcam.
Liam noted that his webcame masses might have 5,000 viewers or hits with emigrants and many others tuning in.
He was working on building a parish centre in recent years, but that project had not been helped by Covid-19 reducing mass attendances.
Whatever his earthly achievements, Liam summed up the news of Fr Jimmy’s passing this week.
“It is like a big light going out.”
Fr Jimmy is survived by his sister Sr Margaret (Texas), Josephine, (Craan), Eileen Smyth (Mullingar), andFrances (Carlow), brother-in-law Raymond, nieces Emma, Niamh and Siobhan, nephews Raymond, John, Aonghus and Lorcan, grandnieces, grandnephews, cousins, extended family, neighbours, friends, Bishop Denis Nulty and the priests of Kildare and Leighlin Diocese and the many parishioners of Staplestown & Cooleragh and his former parishes where he worked.