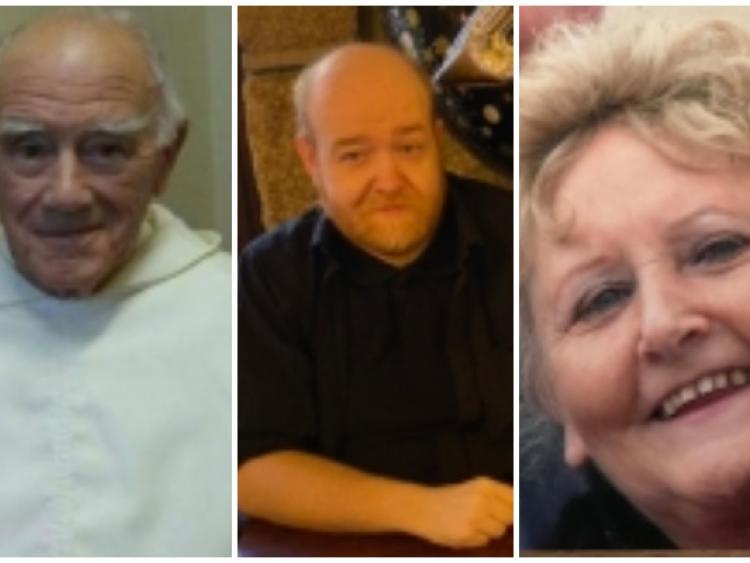 The death has occurred of Rev. Fr. Seamus (Peter) Collins OP of the Dominican Community, Newbridge, Kildare / The Curragh, Kildare

May he Rest In Peace

A private family funeral will take place due to advice on public gatherings. Funeral Mass on Saturday at 2pm in the Dominican College Church, Newbridge.

Burial afterwards in St. Conleth’s Cemetery, Newbridge. Fr. Seamus’s funeral mass will be lived streamed on www.dominicansnewbridge.ie. A condolence message can be left below.

May Joan Rest In Peace

Removal from her residence by Anderson & Leahy Funeral Directors on Saturday morning to arrive at St. Conleth’s Parish Church, Newbridge for 11am Mass. Funeral afterwards to Mount Jerome Crematorium. Those who would like to attend but due to the current restrictions cannot, can watch it on the parish webcam www.newbridgeparish.ie/webcam. You can also leave a condolence message below.

MAY MARY REST IN PEACE

Reposing in her home from 2pm until 8pm on Friday for family and close friends.Removal on Saturday morning to the Church of The Assumption, Castledermot arriving for Requiem Mass at 10am.Followed by Cremation to Newlands Cross Crematorium.

In accordance with current Government guidelines and in the hope of keeping our friends and family safe, Charles’s Funeral will take place privately Saturday, October 24, at 10am and can be viewed online at www.dalkeyparish.ie.

May Alan Rest In Peace.

In an effort to reduce the spread of Covid-19, a private family funeral will take place on Thursday, October 22nd at 11.30 a.m. in The Church of the Assumption, Castledermot, followed by burial in Newlands Cross Cemetery.

To view Alan's Funeral Mass please use the following link

The family would like to thank you for your sympathy and support at this difficult time.

You are invited to leave a personal message on the condolence page below which will be gratefully appreciated.