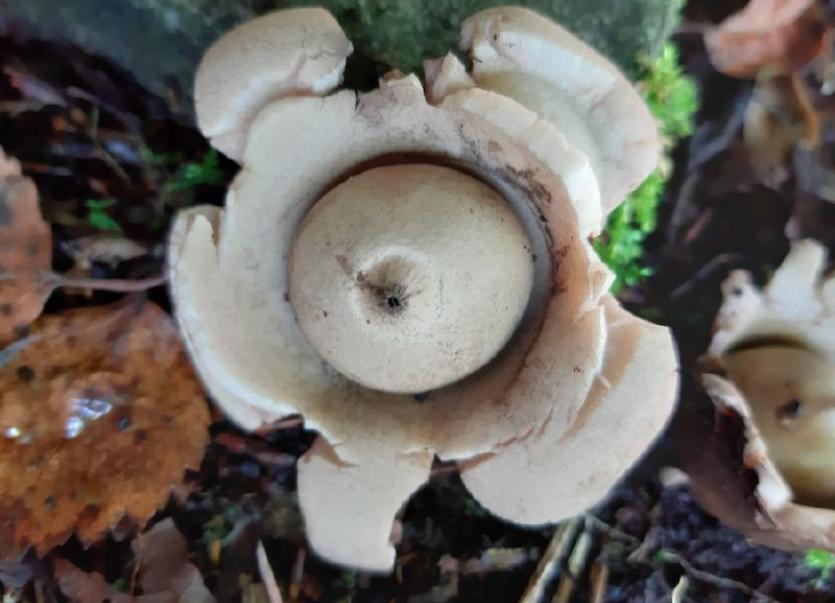 I am not an expert when it comes to fungi, or mushrooms. To give you an example, it was only a few years ago I was made aware by a primary school student that fungi actually have their own kingdom. When I was in school I learned only about two great kingdoms, the animal kingdom and the plant kingdom.

This week my colleague, who has a keen interest in fungi, identified a mushroom in the woody area at the front of the Bog of Allen Nature Centre. This was a new species to me, and my colleague identified it as a collared earthstar fungi.

This particular fungi is typically found in areas where there is rotting wood and decaying leaves such as woodlands or grassy areas with trees. No part of this fungi is edible. While attending a workshop on fungi, I remember the facilitator answering a participant’s question on the edibility of mushrooms we had come across. She explained ‘all mushrooms can be eaten once’ — but this was a reference to the fact that many fungi are poisonous and that without correct knowledge you should never attempt to eat any of them that you come across in the wild.

The facilitator explained that, although many fungi cannot be consumed by us, they have a valuable role in the recycling of nutrients as they are important in the decomposition of woody material.

The collared earthstar mushroom is approximately 12cms in diameter and characteristic features include the egg shaped endoperidium which is surrounded by an exoperidium which has split into a type of collar that appears to look like a star.

Both the endoperidium and the exoperidium have the same function — they are protective layers surrounding the spores.

The exoperidium is a second layer of protection found outside the endoperidium layer. The spores are tiny reproductive cells that enable the fungi to reproduce.

Autumn is a great time to begin identifying fungi in your community — what will you find this week?