Kildare Wildlife Watch: The spider that makes a meal of its mate 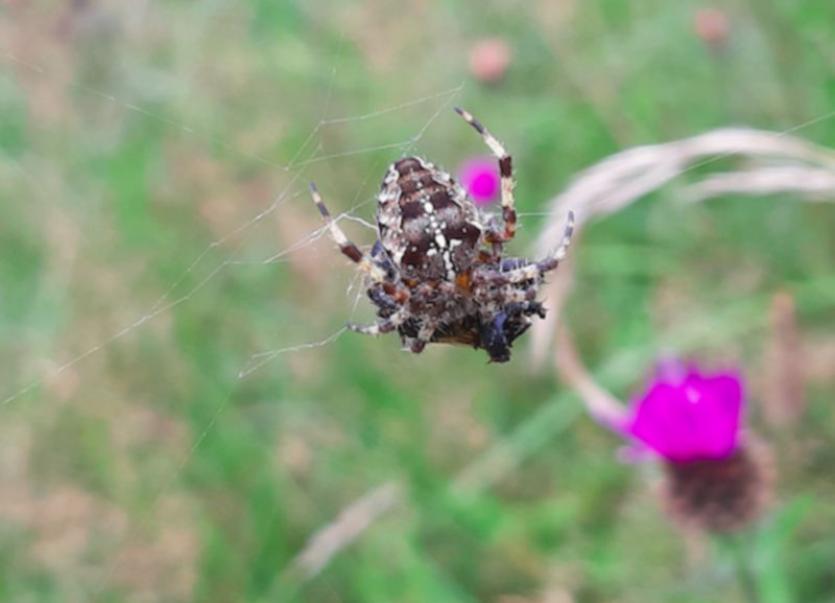 I photographed this week’s species at the start of August, but as my spider identification skills are not the best it has taken me a while to put a name to it.

I now believe it to be a spider within the family of European garden spiders which are also known as cross orb-weaver spiders (damhán alla gairdín na hEorpa as Gaeilge). The picture is of the abdomen of the spider. The abdomen in invertebrates (animals without a backbone) hold the reproductive organs and other vital organs for living. This was the most important area of this particular spider to photograph, as in all species within this family of spider the markings on the abdomen make a cross.

Their body colours can change between individual spiders, ranging from light yellow to dark grey. The eight black and white striped legs are held on the thorax of the spider, which sits between the head and abdomen. The thorax in other invertebrates that fly would also support the wings.

The cross orb-weaver spider gets its name from the style of web it builds.

To build an orb web, the spider first drops a line of silk thread between two supporting structures, which could be as light as between the stems of two flowers. This eventually creates a circular spider’s web that is sticky to catch prey.

It is believed that the female, which is larger than the male — ranging in size from 5.5-20mm — is responsible for building the web, and these are often rebuilt every day!

This spider is a carnivore which will quickly bite its prey to paralyse it, before spinning a silk case to protect its meal for consumption later.

This species of spider has some unusal traits, the first being that, during mating, it is known that the female may kill the male. Secondly, it is also believed that the female will then eat the male, so making this species a cannibal.

Will you find the the cross orb-weaver spider in your community this week?