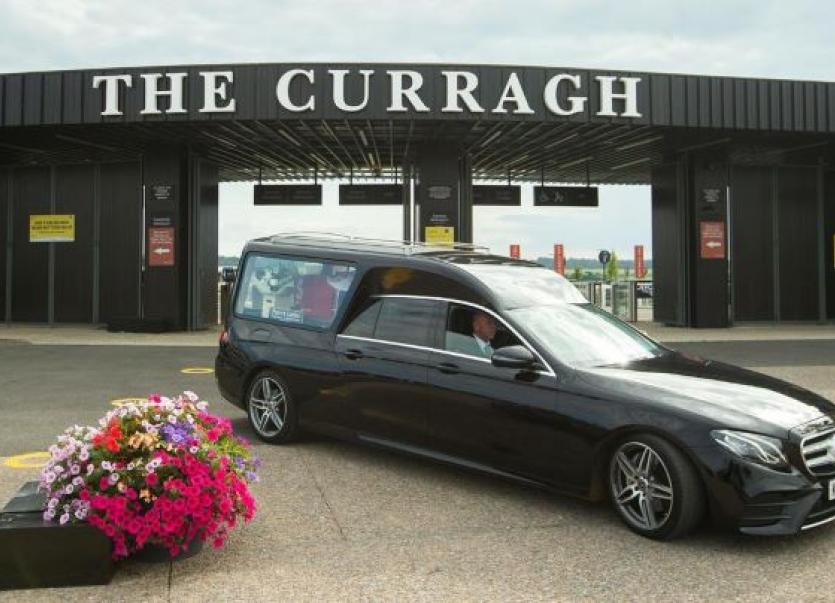 A socially distanced crowd of racing fans gathered at the Curragh Racecourse this afternoon as a hearse carrying the remains of jockey Pat Smullen made a brief stop on its homeward journey from St Vincent's Hospital to his native Co Offaly. 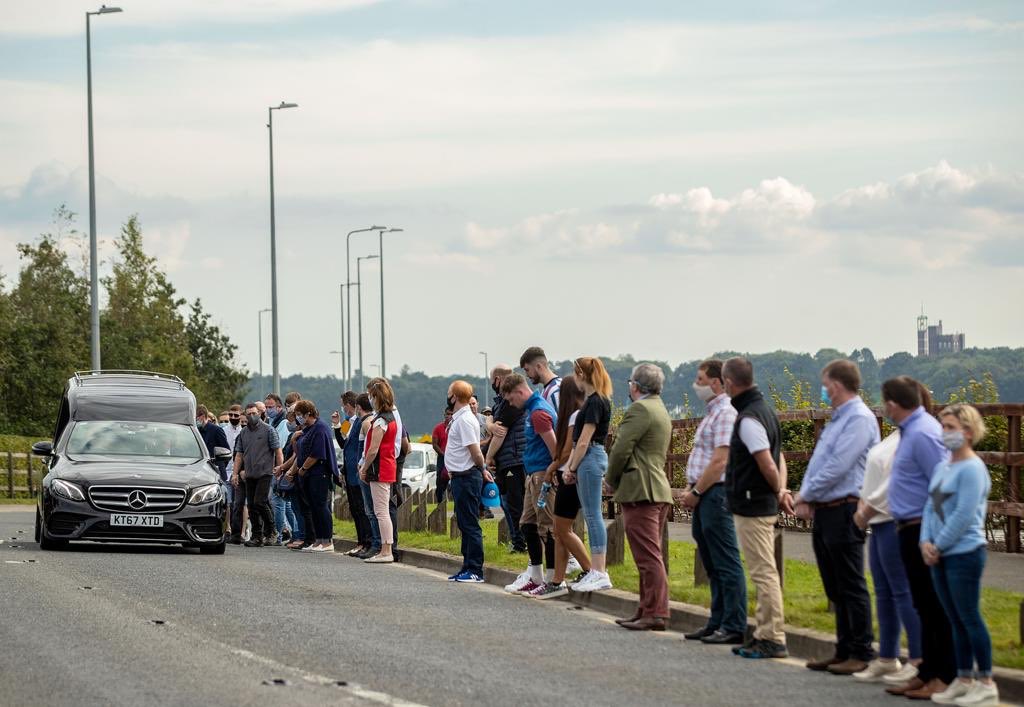 The married father of three passed away at the age of 43 yesterday evening.

Dozens of people walked behind the hearse in silence as it paused for several moments outside the entrance to the Curragh where Pat had many of his famous wins. 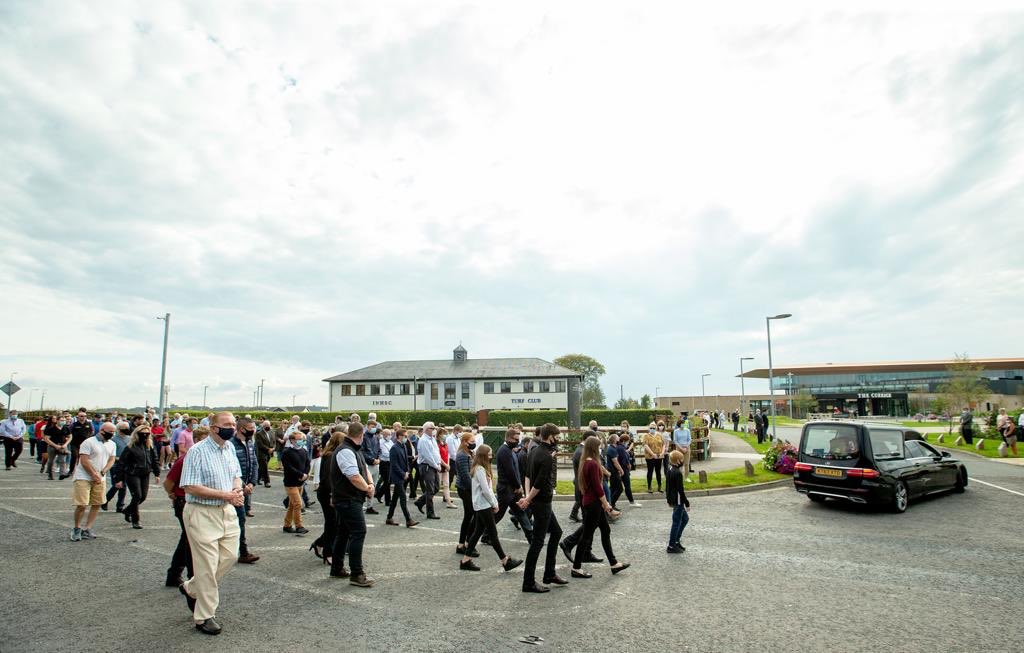 The attendance included veteran trainer Dermot Weld who had a long association with Pat. 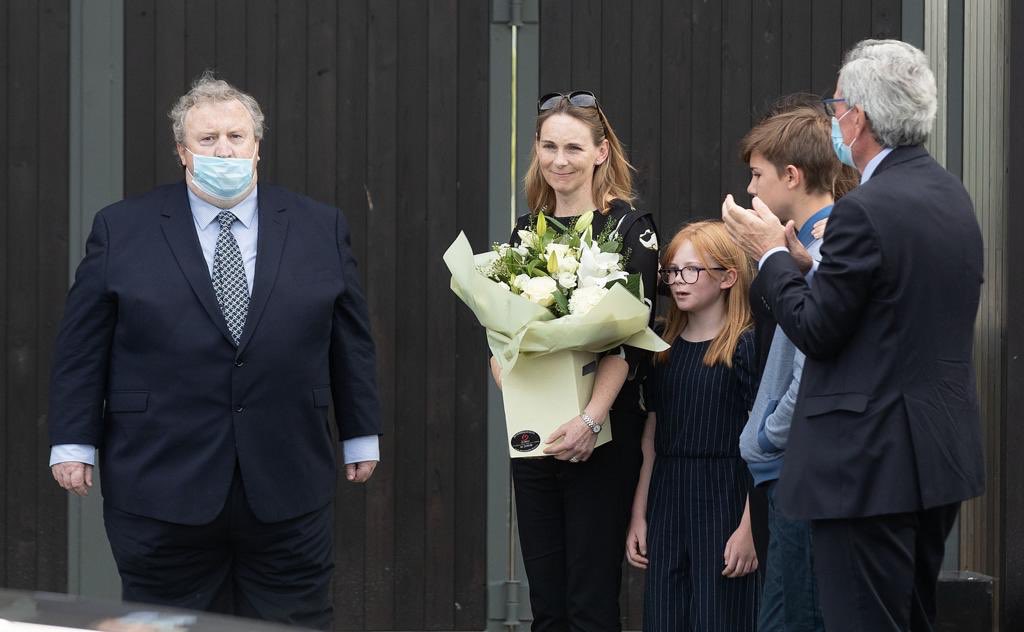 Pat was diagnosed with pancreatic cancer in 2018 and underwent a number of surgeries and treatments.

The Offaly native passed away on Tuesday evening in St Vincent's Hospital.

In 2019, he spearheaded a fundraising campaign for pancreatic cancer research to help others in his position. The campaign raised almost €3 million and included a champions race at the Curragh featuring the likes of Ruby Walsh and AP McCoy.

Due to Covid-19 restrictions there will be a Family Funeral on Friday (18th September) at 2pm in St. Peter’s Church, Rhode, Co. Offaly, followed by burial in the adjoining cemetery. (You can take part in Pat's Funeral Mass via Zoom, the Meeting ID is 6949803979 and the Passcode is 12345.)

"It’s hard to believe his amazing charity race was a year ago today. Heartbreaking. Thinking about Fran, Hannah, Paddy and Sarah. RIP Champ.”

"Pat was such a wonderful person, you always came away the better for meeting him, he just made you feel good.

"Like everyone else, I’m just devastated and thinking of Frances and his beautiful children."

Jockey Frankie Dettori said: "Devastated by the news of my good friend Pat Smullen passing away. A genius in the saddle and a legend of a man. RIP buddy."

Racing journalist Johnny Ward: I" could never get my head around how Pat Smullen coped with what befell him in his prime. What he achieved throughout his illness was nothing short of incredible. Asidefrom being a world-class rider, that's how I'll remember him most. Beyond inspirational. Sleep well PJ Smullen."

President Michael D Higgins: "President Higgins has expressed his deep sadness at the untimely death of champion jockey Pat Smullen, saying his remarkable performances at home and abroad brought joy to so many.
The President conveys his sincere condolences to his family, wife and children.

Retired jockey Barry Geraghty: "It is so sad to hear of Pat Smullen’s passing he was an unbelievable inspiration to us all, an amazing Father, Husband, Friend & Jockey He will be so sadly missed our thoughts and prayers are with Frances, Hannah, Paddy, Sarah and all of his Family RIP"

Broadcaster Hector: "I am sad now this evening with the news of Pat Smullen, my thoughts and love are with him & his family. What a great man .. a lovely man, an Irish man and one of the finest jockeys the sport has even seen ... May he be at peace now."

Broadcaster Derek Thompson: "Pat Smullen was an outstanding man. He fought the cancer with dignity and strength - the same way he lived his life. He has died but will never be forgotton for he was a great guy in every way! Our thoughts and prayers go out to Frances and the children. RIP Pat."

Taoiseach Micheál Martin: "Saddened to hear of the passing of Pat Smullen. An outstanding jockey, loved in the racing world, and who made so many people so happy. Our thoughts and prayers are with his wife Frances and his family. RIP."

Irish National Stud: “We are desperately saddened to hear of the passing of Pat Smullen. He walked with Kings and never lost the common touch. He was the greatest of men. Our heartfelt thoughts to Frances, Hannah, Paddy, Sarah and the extended family.”

Journalist Richard Forristal: "Heartbroken to be reporting this. The planet is a worse place for this man's departure. Pat Smullen was one of the most decent human beings I've had the honour to meet. He has been an inspiration over the past 2 1/2 years. Thoughts with Frances and their kids Hannah, Paddy & Sarah."

Broadcaster Clare Balding: This is unbearably sad. Derby winning jockey Pat Smullen was only 43 years old - such a lovely man and a beautiful rider. I will never forget his grace, his loyalty, his humour and his quiet determination. Love and condolences to his family."

Retired Kildare jockey Ruby Walsh has paid a warm tribute on RTE Radio One to his late friend and fellow jockey.

"You kind of knew it was coming for the last while," Walsh told RTÉ Sport's Darren Frehill.

"He had ridden in Dundalk in mid March (two years ago), so when the opening day of the Flat came about, when Pat Smullen wasn’t there you were thinking ‘Oh, there’s something amiss’. They were hoping it was gallstones but it was worse, it was pancreatic cancer.

"From that day forward, himself and (wife) Frances, what can can you do but just get stuck in and figure out how you’re going to deal with it, cope with it and ultimately aim to make it better.

"But nobody was ever under the illusion other than it was going to be a very big battle. Pancreatic cancer is a very serious illness.

"From the word go, Pat took it on head on and was looking for a way to beat it, but he never wanted it described like that.

Walsh described the qualities that helped the Rhode man to forge such a successful career in the saddle.

"You hear people described as ‘the ultimate professional’ and often wonder what that means," he said.

"He didn't have just one thing, he had a lot of everything to make him so good.

"Pat was incredibly dedicated. He had to do his homework and was always grateful for what he achieved.

"There were times he doubted himself too, but he had to overcome that. He was just a very good rider but also extremely punctual, hard-working, always spotlessly clean. He was a great communicator.

"He was a great judge of pace and always tactically in the right pace. Incredibly detailed and deep in everything he did, he put a lot of thought and effort into what made him a jockey."

Walsh added that Smullen had been a great support to his racing colleagues and had "led by example".

"He was a big character in the weigh-room. He was a great man for the jockey's association, the Irish Injured Jockey’s fund.

"He was a good jockey for younger apprentices to talk to and he led by example.

Brian Kavanagh, chief executive of Horse Racing Ireland, said: “Pat was one of our greatest stars. He was nine-times champion jockey, but in many ways his greatest achievements were out of the saddle.

“Since his diagnosis, he did wonderful work fund-raising for charity and he battled this disease with great heart and it’s hard to believe he has passed at such a young age. All our thoughts are with Frances and his three children, and all his friends and colleagues in the weighing room.

“It’s a really sad day for Irish racing. Pat was one of the finest men you could hope to meet. There’s been such a reaction around Irish racing and such a degree of shock, which shows the high regard in which Pat was held.

“He was a pleasure to have anything to do with – his achievements in the saddle were one thing, but his qualities outside of it were something else.

“He was a global figure in racing, but his reaction to his diagnosis and the fund-raising he did last year in particular was really wonderful. It’s just a sad, sad day.”