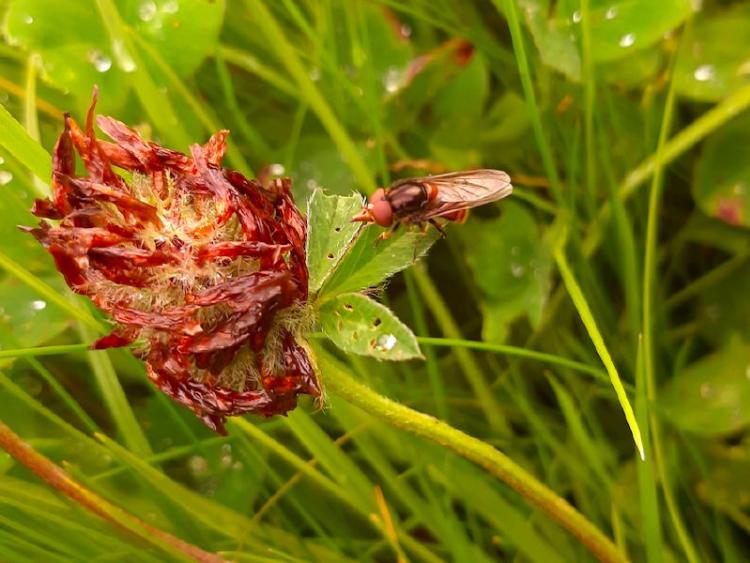 Hoverflies are considered important pollinators in our communities. A few weeks ago we explored how some hoverflies mimic bumblebees.

This week I came across another hoverfly which was not as tricky to identify due to one distinctive feature. I don’t think the unique qualities of the long snout hoverfly (hoverfly fada snout as Gaeilge) require much explanation, with my assumption based on both the name of the species and your visual observations from the picture provided — yes, it has a long nose and mouth parts!

The adult of this hoverfly can be seen in flight from May to September each year, foraging for nectar and pollen on wildflowers around hedgerows, farms, gardens, meadows and parks.

It is considered a common and widespread hoverfly but it is small, measuring only between 7-11 millimetres in length so it can often go unnoticed in our communities.

The thorax has light metalic orange stripes the length of it and the orange abdomen has a black stripe.

Not so pleasant is the fact that the young or larvae of this hoverfly are associated with cow dung!

The long snout hoverfly is also known as the Heinken hoverfly. Heinken beer used to have a slogan ‘refreshes the parts that other beers cannot reach’, that was written by Terry Lovelock in 1973.

The long snout on this hoverfly means that it can collect nectar and pollen from tubular (long, thin straight-sided tube formed from petals) flowers which are inaccessible to other hoverflies.

Now I have to admit I am presuming this is why the long snout hoverfly is referred to as the Heinken hoverfly —I am happy to stand corrected if this is not the case.

Can you find the long snout hoverfly in your community this week?