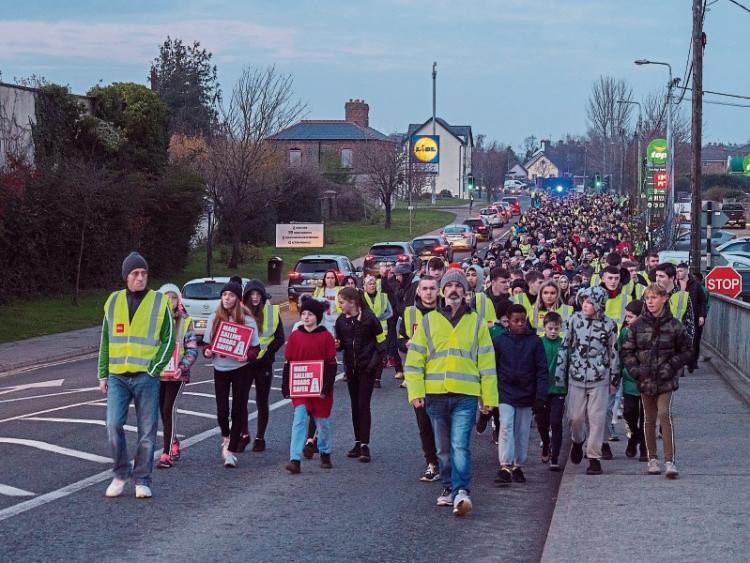 Sallins residents walked in support of safety measures in 2018

Sallins residents have welcomed news that Kildare County Council has applied for funding under the Government’s Covid-19 July stimulus package, for a traffic survey of pedestrians, cyclists and vehicles in the town this year.

It is hoped that a traffic calming scheme will be subsequently put in place during 2021.

Sallins residents have staged protests and pressurised Kildare County Council to put in place measures to slow the speed of some of the 22,000 plus vehicles which go through the town every day.

Adrian Devine, chairperson of the Sallins Road Safety Action Group said: “If the funding is granted for the design study this year, and for the subsequent construction next year of proper traffic calming measures, then we’ll be delighted. Our group of concerned residents has been working tirelessly, for more than two years to try to get the council to put in place some tangible traffic calming measures in a town which has been badly affected by speeding and by road accidents.”

He thanked the council and would also like to thank our local public representatives, especially Cllr Carmel Kelly.

The Sallins Road Safety Action Group is a combination of people from within and around Sallins who, as concerned parents and residents, want action from Kildare County Council (KCC) regarding the lack of traffic-calming measures in the village.

The group is comprised of residents from all areas of the village (including all of its various sporting group and residents’ associations) and also has the support of national and local politicians from across the major political parties.

Its main strategy has been to consistently call on KCC to urgently put in place permanent and effective traffic-calming measures such as speed bumps or lane narrowing devices in order to slow traffic passing through the village.

The group says it is focused exclusively on bringing the issue of road safety into the forefront of public attention, while also building and maintaining pressure on Kildare County Council (KCC).

It has three main aims to work as a pressure group to improve road safety in Sallins; to change the attitude and behaviour of drivers by raising awareness of the issue of road safety and to work proactively with relevant local and national authorities in developing ideas and plans for effective and permanent road safety measures in Sallins.