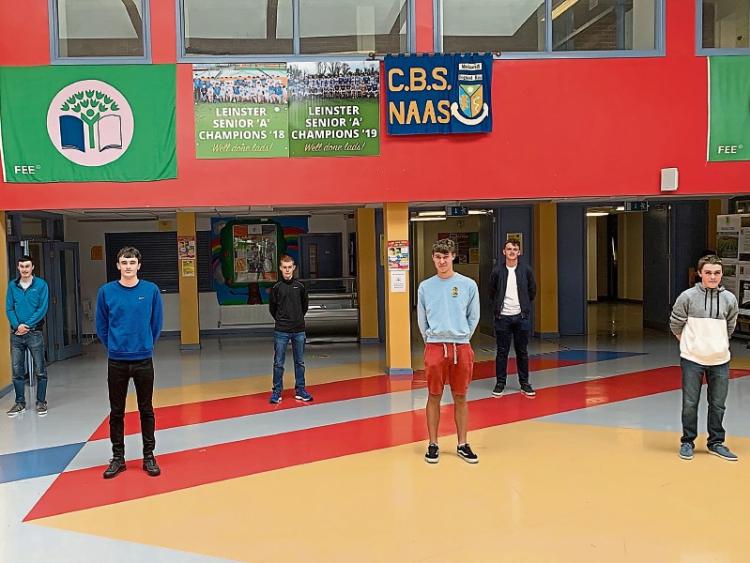 Although there is a great deal of satisfaction overall with the Leaving Certificate results earned by students at Naas’ St Mary’s College, it is tempered with the knowledge that some results may not be good enough to secure preferred college places.

“We’re happy with the results in general and there does appear to be some inflation of the points awarded when compared with last year’s outcome,” said principal Mark Dowling.

However, he also said it was apparent that some of the grades were lowered by the Department of Education and Science and this aroused some concern among students.

“Nationally there is an overall improvement of 4.4% and this could mean that there will be a rise in the points required for various courses — but we won’t know that until Friday.” Calculated grades have the same status as the results awarded to students in previous years and those that will be awarded in future years.

Naas CBS student Conor Whelan had seven H1 scores and he was one of six students at Naas CBS who exceeded the 600 points barrier along with Eoghan Stynes, Tom O’Sullivan, Eoghan Kelly, Adam Halford and Mark Noble.

“We’re thrilled with the results, which are broadly in line with what has been awarded over the past five or six years,” said principal Ben Travers.

He also praised the students, the school community and their parents for overcoming what has been a difficult year as a result of the coronavirus.

He also said that students who struggled academically during the year also performed well.

“It was heartening to see them do well as it is to remember that the exam is only part of the journey,” he added.

At Leinster Senior College in Newbridge one female student achieved over 600 points.

But other students were disappointed that they saw grades drop in more than one subject in the standardisation process adopted by the Department of Education.

Principal Karl Hegarty said: “We are happy with the results — the Leaving Cert is always about achieving what you need to continue your education.

“However some students were disappointed after they were knocked grades which they would have consistently achieved.

“One or two students were knocked grades in up to three subjects, which could potentially be a drop of 30 points, which is hard for them to take.

“It may be acceptable in one subject for a student, but if it happens more subjects, that’s very unusual and difficult to understand.”

Mr Hegarty acknowledged that the students had come through unprecedented and difficult times to get to this stage.

He explained: “You have to give enormous credit to these students for going through this process. We’ve had several students over 500 points and one student achieved over 600 points.”

Meanwhile, a youth services expert and public representative has paid tribute to the class of 2020 in County Kildare ‘who have achieved what no other group has achieved’.

Cllr Aidan Farrelly, who is Team Leader at The Hive Youth Services in Kildare town, said he has been getting positive feedback from school leavers who received their calculated grades this week.

But he believes that the real worth of the results will be measured with the first round of CAO places are announced on Friday.

Cllr Farrelly told the Leader: “The feeling is good from a lot of students because of the general uptrend in results means that they may have got over the line for a Pass in a subject they wanted for a course or an apprenticeship or a traineeship.

“We tell people that contact us that they have achieved something no Leaving Cert class before them has done, and that is something to be proud of.

“The calculated grades is just one phase of a process and the students have achieved this milestone. There will be lots of other options available from this point.”

He added: “It might not feel OK today but it will be OK.”

Cllr Farrelly believes that anxiety levels may rise again coming up to the first round of CAO offers on Friday.

He explained: “The CAO offers will demonstrate if these results translate into preferred third-level places.

“The Minister for Education commended the students for their courage and resilience and I think that is a very important message to put out there.

“Because over the past few months, before the Leaving Cert was postponed, there were issues in the news amost every day and it was affecting the mental health of students.

“So every student needs to give themselves a pat on the back and reflect on the achievement of getting this far.”

Joseph Leonard, principal of Cross and Passion, Kilcullen, said teachers would not want a re-run of how the exam was conducted.

“No results was given by a single teacher, it went through a number of stages, from the teacher’s original mark, and the Department of Education did their work.” Approximately 122 sat the exam at the school.

“The majority of subjects have an additional component to them. I am not sure that the teachers would like to do this again, we all hope it was a unique situation, it was challenging for the teachers and students. It is not what we are about.

He added: ““We had a very good set of students. There are a lot of students well up in the 500 points, it is not a surprise, whether the exams had gone ahead or not, we would have been expecting these sort of results. The majority of students were taking higher level. They are interested in everything, science, music, languages. ”

Padraic Brennan, Deputy Principal of Scoil Mhuire, Clane, says that the Leaving Cert results for 2020 have “been very strong and very respectable.”

“There has been a lot of pressure on the students, on the day they got the results, we did not get to meet them, we talked to them over Zoom. Normally the students would come into the school for the results, it takes away the energy.”

Principal of St Farnan’s Post Primary School in Prosperous, Eddie Collins, says that the return to school has been “very busy” and that it is tough for the students who are not getting to celebrate results properly. “They were left in limbo, were they going to sit an exam or weren’t they?

“A lot of effort went in to calculated grades. I’m sure they are now delighted to be finished.”

An Evo-Fit of the suspect Gardaí want to locate

Garda appeal over suspect involved in alleged break-in at property