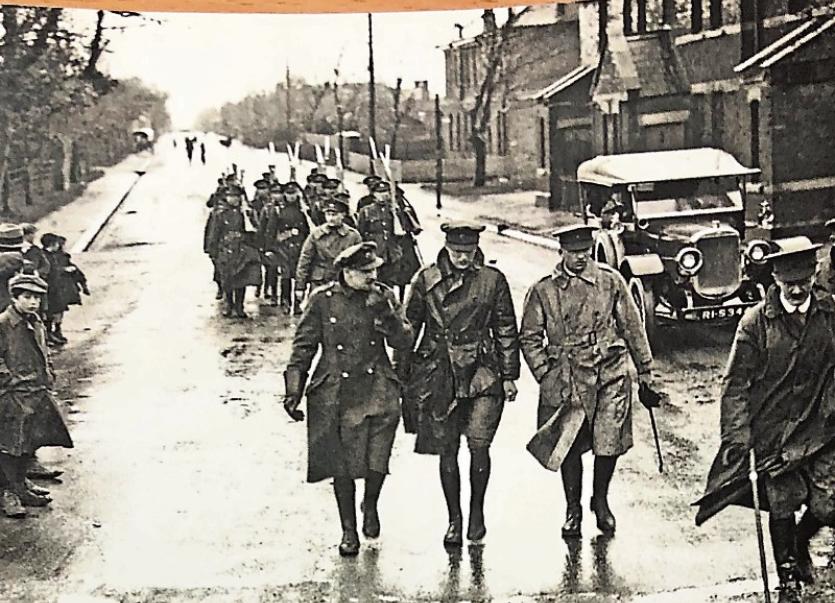 Seamus Cullen’s Kildare, The Irish Revolution 1912-23, which has just been published by Four Courts Press, is a scholarly work, and all the better for it.

It is characterised by a comprehensiveness and an unrelenting barrage of facts, complete with copious annotated references, an index and a dedication to placing every episode in its socioeconomic-political context.

It is also devoid of any agenda or bias - every viewpoint is as worthy as the next, every death as tragic as the last.

But none of that is any reason to be put off from reading it. The author introduces us to the world of Kildare in the first two decades of the 20th century so well that it is easy to imagine what drove our grandparents’ generation to take up arms.

It has been almost 30 years since I studied history for my Leaving Cert and I had forgotten much, such as how much Home Rule was once the abiding nationalist movement in the country, and much else besides.

Cullen’s book is excellent at tracing the various points along the way that changed Ireland generally, and Kildare in particular, from constitutional nationalism to the more urgent and angry physical force of advanced nationalism.

But then there are numerous things I didn’t know which are covered in this book - like how Kildare in 1912 was a county of 66,000 people (about the population of the current Naas and Newbridge conglomerate), with the population of its largest towns hovering around the 3,500 mark. Modern day Prosperous would have had a similar population to Naas 100 years ago.

As now, Kildare then was like an onion, with multifaceted layers of influences. This is an important setting for Cullen, who is conscientious to record the activities and views of the various strands of nationalist (there are several) and unionist population.

The greatest influencing factor on the county 100 years ago was the overwhelming presence of the British Army across several barracks. Not only did they play a role militarily in 1916 and during the War of Independence, but a significant portion of the county’s economy was dependent on feeding the soldiers.

As a result, Kildare was always considered to have been one of the quieter counties during the War of Independence, but Cullen goes a long way to upending that assumption. While there was less shooting than in other parts of Ireland, at various times large swathes of the county came under republican control.

And the most significant contribution during the War of Independence was in the acquisition of high level intelligence from the RIC’s County Inspector in Naas barracks.

It is important also to say that Kildare was the kind of place where the inhabitants of the big houses were important voices, and where a significant percentage of the population was unionist and/or Protestant, an identity they did not suppress as they have perhaps done since independence.

Cullen does not shy away from chronicling the widespread intimidation, violence, burning and looting against Protestant and unionist gentry and their homes which took place in the latter months of the Civil War.

The 1926 census revealed that the population of the county had dropped by 12.9% since the previous census in 1911, a change that Cullen attributes to a 69.6% drop in the Protestant population, “a far greater decrease than in any other county”. That being said, at least 5,000 of them were British army soldiers.

What we now regard as Northern Ireland was not then separated and many, including those in the army, were well-disposed to the plight of Mr Carson and fellow Ulstermen.

For instance, in what became known as the Curragh Incident on March 20, 1914, a group of senior army officers refused an order to get involved in proposed military action against the 100,000 strong UVF which was making threatening noises about opposing Home Rule.

Cullen’s sources are immaculate. The Leinster Leader, of course, is an important source, not least because its then editor Michael O’Kelly was a very active and vociferous nationalist. He also references the unionist-leaning Kildare Observer.

Elsewhere, he relies on reports from RIC and military sources, both Irish and British, and Cullen also travelled to London to access the treasure trove that is the Military Archives.

This allows him to trace the gradual decline of Redmondite or constitutional nationalism and the growth of Sinn Fein and the IRA Volunteers over the course over several years, by quoting the reaction of locals to episodes like the outbreak of the first World War, the failure to implement Home Rule, Easter 1916 (and its aftermath), the death of more than 150 Kildare men in World War I and the threat of conscription.

While already an outstanding addition to what we know of that period in Kildare, Cullen’s book is to be particularly commended for the addition of two particularly notable topics that have not been, to my mind, previously or sufficiently explored in official histories.

The first is the role in general of Kildare as a conduit for intelligence and logistics during the War of Independence. He explains that because the north of the county was regarded as quiet, it was an ideal place for IRA men on the run, such as Dan Breen and his colleagues following the Soloheadbeg ambush, to hide.

Perhaps the book’s most dramatic revelation is straight out of a James Bond novel. Sgt Jeremiah Maher, a clerk in the office of RIC Inspector in Naas, passed RIC communications to the IRA that found their way within hours to Michael Collins.

And so deeply embedded was Collins’ intelligence that when Maher, fearing he was about to rumbled, resigned from the RIC, his successor took up with passing intelligence to the IRA where his predecessor had left off.

The other area that he explores diligently is the role of the trade union and Labour movement, which was particularly strong, perhaps unsurprisingly, in working class towns such as Newbridge.

By April 1920, strike committees controlled virtually every town in the nation outside the north east, and it has been argued that Ireland was fast becoming an equivalent of the Russian Revolution of February 1917.

In the same month, two days of general strikes had the effect of pressuring the authorities to release hundreds of political prisoners, and another strike for six months starting in June of 1920 saw Kildare railwaymen refuse to handle munitions or operate troop trains.

While the British army forces in Kildare were obviously considerable, they relied very heavily on rail links, so that strike made life difficult for them.

Seamus Cullen should also be commended for never glorifying any of the violence or general war effort. He relates the circumstances of RIC men who lost their lives, leaving children and wives behind, and he devotes a section of the book to the psychological toll that the threat of violence had on ordinary RIC men.

Two of them, Constable Thomas Bradshaw and Constable Harold Stiff committed suicide in Monasterevin barracks, the former just before he was due to head off on a patrol.

The RIC was also subject to numerous resignations.

The period between the end of the War of Independence and the start of the Civil War is one of the most interesting, with the huge military apparatus of the Curragh coming to terms with the notion that the IRA had ‘won’ the conflict, even though, as Cullen has stated, local Volunteers had concentrated their actions on the RIC rather than the army.

Similarly, both the IRA and general public of Kildare began to come to terms with the Treaty, with some for and some against - although, interestingly, in the June 1922 general election, two Labour Party candidates and a Pro-Treaty candidate were elected, and no Anti-Treaty candidate.

Cullen’s recounting of the Civil War era also includes great yarns about a series of prison escapes, including one from Newbridge that has much in common with the Shawshank Redemption!

But the Civil War in Kildare is also recalled for a significant number of executions of anti-Treaty IRA men towards the end of the conflict, with the deceased often being buried in unconsecrated ground without the presence of their loved ones, a chilling conclusion to the conflict.

Post conflict, Kildare’s political persuasion returned to its Redmondite roots, though under a pro-Treaty guise. This is best illustrated by the results of the 1922 and 23 elections when the entire membership of the government and ruling party of the Irish Free State were past members of either Sinn Féin or the IRA – except in Kildare where none of the eight members to the Dáil and Senate from the county between 1922 and 1927 had been members or former members of either.

That being said, when Fianna Fail was formed some years later, Domhnall Ua Buachalla and Thomas Harris, who both opposed the Treaty, were elected for the party. Meanwhile Kildare’s pro-Treaty activist in the Civil War faded almost completely and played no role in the politics of the Irish Free State.

Kildare, The Irish Revolution, 1912-23 by Seamus Cullen, is on sale now in all good bookshops.