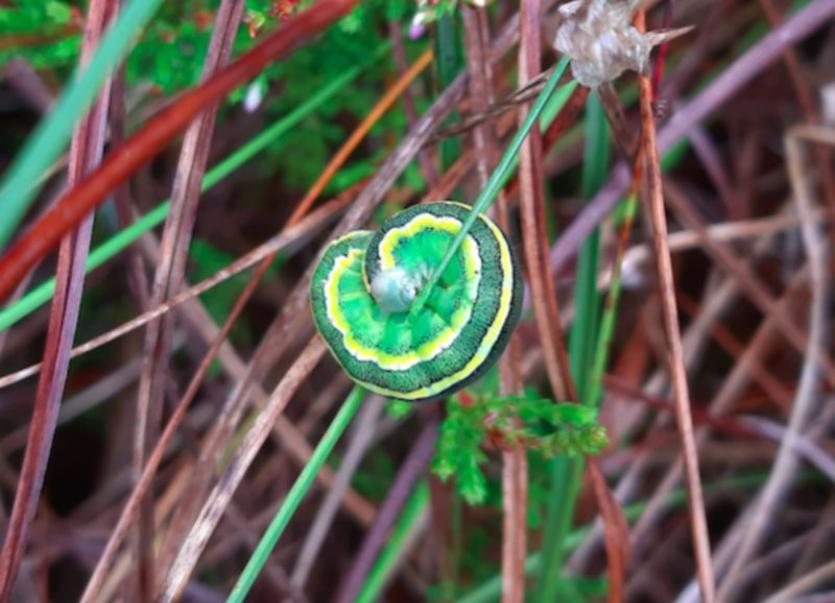 The caterpillar of the broom moth. Picture: Nuala Madigan

Last week, I came across a brightly coloured moth caterpillar on a visit to the bog. I have since identified it as the caterpillar of the broom moth (leamhan broom as Gaeilge).

The broom moth is a common species in Ireland and considered widespread. It can be typically found in habitats including bogs, gardens and woodland. The adults can be found in flight during May and August each year.

Its wingspan ranges from 30 to 37mm and the wings are grey-brown in colour with the most distinguishing feature being a wavy creamy line which runs parallel to the wing tip.

The female will lay her eggs on the food plants of the caterpillar which include bramble, willows, gorse and broom, which looks very similar to gorse but the key difference is that broom is not prickly.

The eggs take only a few days before they hatch and begin to feed. The caterpillar, once fully grown, can measure up to 45mm in length and is green-brown in colour with bright yellow lines running the length of the body. Its head is typically a paler green in colour.

By October the broom moth caterpillar, like those of moths and butterflies and the larvae of beetles, flies and wasps, pupates. This is a stage in their lifecycle where they undergo a complete metamorphosis.

Metamorphosis is defined as the process of transformation from an immature form to an adult form. During this time, enzymes are released breaking down the body tissue of the young into a type of ‘soup’. It is believed at this stage some cells are retained, linking their development as caterpillars to the adult form.

To protect themselves over the winter months in this state, the broom moth will bury itself in soil. Once spring comes around, the newly-formed adult moth emerges and their lifecycle begins again.

Although the population of this moth is considered good, habitat change and pollution can affect their numbers. Can you find the broom moth caterpillar in your community this week?

If you would like help identifying or to learn more about a wildlife species, contact me via email at bogs@ipcc.ie.