War of Independence: James Durney of the Decade of Commemorations Committee, recalls a night of violence on August 26, 1920, when the Black and Tans burned and destroyed their way through Kildare 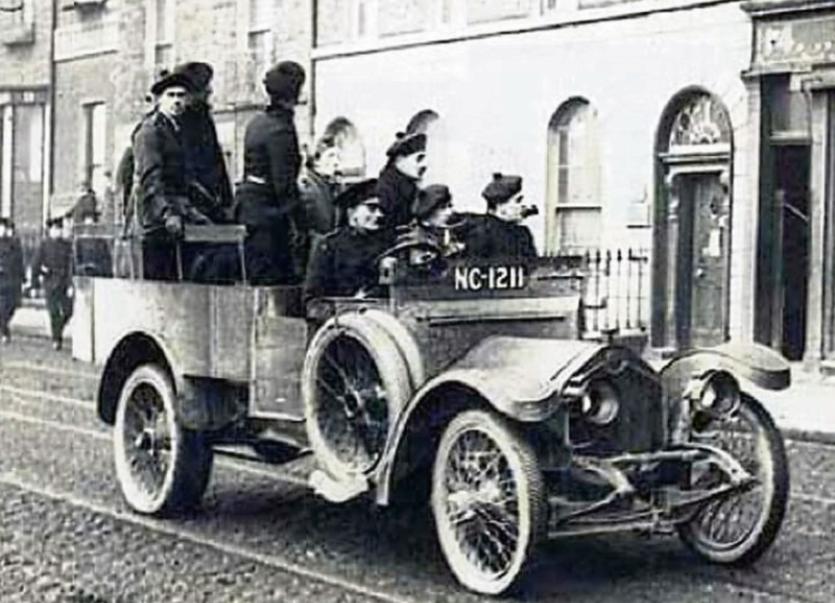 Black and Tans in a Crossley Tender

On August 21, 1920, two policemen, Sergeant Patrick Reilly and Constable John Haverty of Kill RIC Barracks, were killed in an ambush at Greenhills, Kill. Subsequently, Broughal’s public house in Kill was raided and looted by a party of Black and Tans, while another group burned the premises of Boushell’s Family Boot Maker and Leather Merchant at South Main Street, Naas.

The Black and Tans’ reputation for brutality mainly arose out of their willingness to avenge the death of members of the crown forces by exacting reprisals on the civilian population. About ninety per cent of Black and Tan recruits had served in the British forces in World War I and were hardened by their experiences. They had no policing knowledge, except for two weeks of training at Gormanstown Camp, Co Dublin. Their reaction to a hostile civilian population had predictable results and in August 1920 the Black and Tans would bring terror to Co Kildare.

Five days after the Kill ambush, at 7pm on August 26, twenty Black and Tans armed with rifles and revolvers arrived in Kill village by motor lorry. They stopped outside the Dew Drop Inn, which was directly across from Kill RIC Barracks — the inquest into the death of Constable Haverty had been held in the Dew Drop. The Black and Tans entered the Inn and remained there for some time. Then two of the party, one in uniform and the other in civilian attire, proceeded from the Dew Drop Inn to Thomas Broughal’s nearby premises. The man in uniform was trailing a rifle after him, while the other held a revolver in his hand.

Ellen Broughal (48), the wife of the owner, was behind the counter as the two Black and Tans entered the premises using foul language, one of them shouting “What bastard killed the policeman. Will anyone kill one tonight?” Approaching the counter, one of the Tans shouted: “Get us two bloody pints of ale!”

Mrs Broughal provided the drinks and as she was leaving them on the counter the policeman with the revolver fired two shots into the ceiling. Leaving the two pints on the counter without payment, Ellen Broughal turned and ran out the door.

The Tan who fired the shots shouted: “We’ll blow up this bloody place tonight.” Meanwhile the lorry had driven down to the Dew Drop Inn with the rest of the policemen and they began removing around three dozen bottles of whiskey, brandy and rum and a large quantity of bottled stout.

The Black and Tans then smashed all the remaining bottles, firing shots at some and breaking the rest on the floor. One policeman went outside where a mare, the property of Michael Delahunt, Blackhill, Kill, was standing at the door. He drew his revolver and shot the animal through the neck. (Michael’s son Patrick Delahunt had taken part in the Greenhills ambush.)

The Black and Tans, having consumed a quantity of drink, left the pub and departed in the lorry cheering and shouting.

Not long after, another lorry load of Black and Tans arrived. Some of them entered Broughal’s premises and one drew a list of names written on a piece of paper from his pocket. He inquired from several men who had remained in the premises their name and when they gave the answer he compared it with the list and then said, “Get out home. We don’t want any of you.”

When the second group of raiders departed, the owner, Thomas Broughal, returned and closed his licensed premises. Thomas and Ellen Broughal left their accommodation, feeling it unsafe to remain. Between twelve and one o’clock that night, two motor lorries of military and police arrived, and the house was systematically searched; a bed and bedding were thrown out into the yard. A local man John Abbott, who was returning home late that night, was severely assaulted by one of the raiding party.

Several houses in the locality were also raided, including that of Peter Domican, whose two sons had taken part in the Greenhills ambush, and some republican items were taken away. When local police arrived the next morning to make inquiries, they found Broughal’s premises empty.

That same night, August 26, two lorries with 10 Black and Tans in each arrived in Naas around 1am. They drove into the town from the Newbridge Road, turned into Basin Street and then drove onto Main Street. One lorry parked at Staples Dowling’s public house on the corner of Basin Street while the other parked at the Town Hall. Fortunately, no inhabitants were on the street at the time, and any late pedestrian made it inside with speed.

The Black and Tans dismounted from their lorries; a group of them went to the Town Hall, shook the outer gate and went away when there was no answer from the caretaker. A number of men knocked on the door of butcher Denis Patterson at 11 South Main Street but received no answer. (Several of his adult children were involved with the Irish Volunteers and Cumann na mBan.)

Loud knocking was heard at the door of JJ Whyte’s newsagent at 18 South Main Street, and again there was no answer. Jimmy, Ned, Paddy and Mick Whyte were all members of the Irish Volunteers while their sister May was at one time commanding officer of Naas Cumann na mBan branch.

People were woken by several single shots followed by a sustained firing for about 10 minutes from the Black and Tans who were in open formation across the street. Nobody ventured outside as they feared that an attack on the police barracks was in progress.

The Black and Tans then turned their attention to Boushell’s Family Bootmaker and Leather Merchant across the street from Whyte’s, beside the Leinster Leader premises and next to the police barracks. There was the sound of smashing glass and the door was forced in. The shutters were removed by the Tans who also sprinkled petrol around the premises. Mills bombs were thrown in and shots discharged into the premises and flames shot up. One of the Tans shouted “Fire!” as the building went up in flames.

At the time of the attack the building was occupied by the proprietor Ben Boushell and two of his sisters who were in bed asleep. The manager of the Leinster Leader, John James Devlin, was awakened by the explosion and found the premises next door aflame. The two ladies were so terror stricken that it was with difficulty that their brother got them downstairs to safety; they were lucky to escape unharmed through the back door and into the Leinster Leader yard.

The sisters were in a state of undress and were taken across the street to Whyte’s premises where they remained for the night. The building was completely consumed by flames as the Black and Tans left around two o’clock firing revolvers and rifles indiscriminately.

Throughout the period of the raid, the police in Naas RIC barracks remained indoors, believing that they were under attack. Shortly after the Black and Tans left, two Verey lights (flares) were fired from the police barracks and the town’s inhabitants came out to try and stop the flames spreading to the nearby Leinster Leader offices.

RIC Co Inspector Kerry Supple and RIC District Inspector Major Foley arrived from Naas Military Barracks, where they had quarters. Maj Foley and some men from the police barracks went to the Town Hall and returned with a water hose. In the meantime, several residents — among them Town Hall caretaker John Rogers; Cllr Michael Fitzsimons; Paddy and John Grehan, local Sinn Féiners; Mick Cush, OC Naas IRA; William McCormack, Main Street; and James Tracey, of New Row — had come out into the street to help. Three of those who also tried to extinguish the fire were ex-soldiers. The hose was brought into play on the burning building but despite their efforts, Boushell’s shop and everything within was destroyed.

Attention was successfully concentrated on saving the adjoining Leinster Leader building, from which the formes, paper, etc., ready for printing had to be removed. Cartridges, whiskey bottles and two RIC caps were later found in the street.

On Friday morning nothing but the bare walls remained of Boushell’s shop. The building was not covered by insurance. Ben Boushell later claimed for £8,000, 4 shillings for the house and contents destroyed, while the Leinster Leader Ltd. claimed for £1,400 for the destruction of their property, namely the house occupied by Boushells.

The Boushells were not connected to any political organisation and none of the family had taken part in political matters so the reason for the arson attack was a mystery. Ellen Gaul, of Rathasker Road, great aunt of the author, recalled that the reason Boushell’s was burned was that the Black and Tans were looking for the home of Jimmy Whyte and acting on incorrect information torched Boushells by mistake. This was the general consensus for the reason for the attack.

However, Peter Lawler, a prominent local republican, maintained that when a detachment of Black and Tans first arrived in Naas in March 1920, Ben Boushell cleared out his shop window leaving only two shoes in public view — one shoe was black and the other tan!

The Black and Tans probably did not forget this slight and torched Boushells at the first opportunity. It is also possible that they could not find Jimmy Whyte’s home and decided to burn the next best thing.

Whatever the reason, the residents of Naas and Kill were luckier than many more throughout the country who suffered far greater at the hands of the Black and Tans.