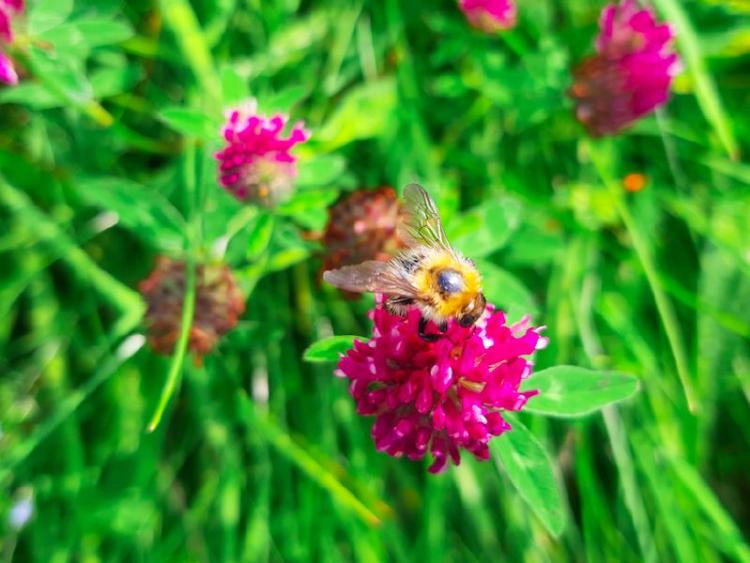 Earlier this summer, I introduced you to the narrow-bordered bee hawk moth. This moth is known as a bumblebee mimic as its body is covered in fur, similar to bumblebees, which are often referred to as flying teddy bears!

It is believed that some invertebrates (an animal without a backbone) mimic bumblebees as a disguise to hide from predators.

This week I came across another bumblebee mimic but this time it was a hoverfly. The hoverfly has a scientific name, Volucella bombylans, but no common name other than it is referred to as a bumblebee hoverfly.

To help you identify between the bumblebee hoverfly and an actual bumblebee there are a few characteristics to watch for.

Although difficult to spot in the field, hoverflies have no biting mouthparts and their eyes cover most of their head.

Finally, as their name suggests, the hoverfly will often hover in mid air and the bumblebee does not.

The bumblebee hoverfly can be seen in a wide variety of habitats, including gardens, woodland edges, hedgerows and wildflower meadows.

It is found throughout Europe and this particular species can be mistaken for the common carder bee on first glance, as I did.

This hoverfly is larger than other hoverflies, with a body length that can reach 17mm.

The bumblebee hoverfly can be seen from May to September but it is said that the populations peak in June.

The adults feed on the nectar of a variety of flowers, including but not limited to valerian, rosebay willowherb, red clover, knapweed and thistle.

The female does not build her own nest — instead, she lays her eggs in the nest of a bumblebee or another host and when the young emerge they scavenge on debris and on some occasions will also feed on the larvae of their host.

Can you find the bumblebee hoverfly in your community this week?

If you would like help identifying or to learn more about a wildlife species contact me via email at bogs@ipcc.ie.