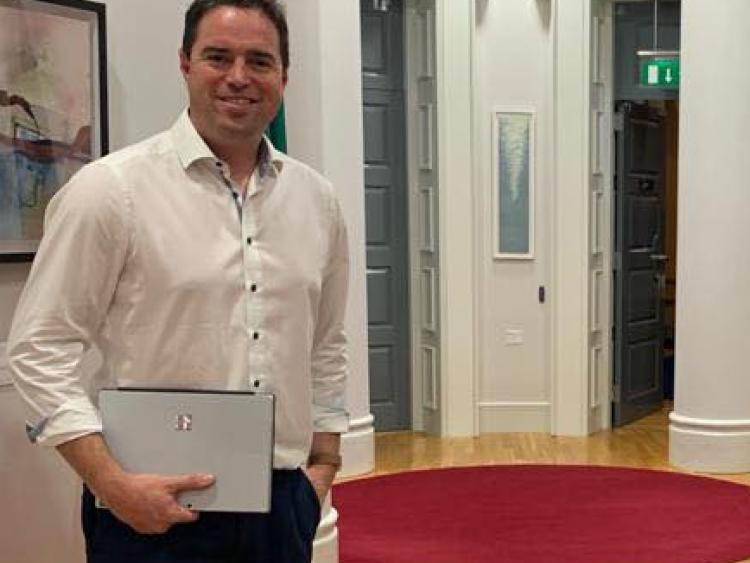 New Minister of State at the Department of Agriculture, Food and the Marine Martin Heydon said he will be using his new position to continue to push for local projects like new schools and a second bridge for Newbridge.
The politician was rewarded for his hard work as a TD and as Fine Gael parliamentary party chairman with the junior ministry. He has three key areas of responsibility — Research and Development, Farm Safety and New Market Development.
Mr Heydon said he was honoured to be given the busy role by Tánaiste Leo Varadkar — and he added that he will continue his focus on his constituents.
Mr Heydon is the first Fine Gael Minister in Kildare in 23 years since Alan Dukes served as Minister for Transport, Energy and Communications following the resignation of Michael Lowry in November 1996.
Mr Heydon said: “I will remain focused on my priorities for Kildare which include completing the ring road for Athy, getting a second bridge for Newbridge, pushing for new schools and planned extensions, developing more job and employment opportunities in Kildare, roll out of fibre broadband, upgrade of St Conleth’s Park in Newbridge and seeing the completion of the Barrow Blueway.
“I have been actively pushing many of these projects over the past nine years.”
Mr Heydon said he has helped secure Government investment in Co Kildare as a TD and he hopes that this will continue.
He said: “The tender for the main construction contract for the Southern Distributor Route in Athy has been issued so it is in progress as is the Barrow Blueway where works are due to start on July 15.
“Funding for that project was allocated last year from the Rural Regeneration fund under Minister Michael Ring.
“Works on the Sallins bypass are also in progress and well advanced and I hope we will see it completed and opened soon.”
The married father-of-three said the areas of responsibilities in his ministry were agreed between the parties as part of the discussions on the Programme for Government.
He explained: “I believe they are three key areas given the need for more innovative measures in agriculture and food production, the incidence of farm accidents and the importance of new markets for agricultural produce in the post Brexit environment.”
Mr Heydon said it would be an important time for his department with the livelihoods of farm families at stake.
He explained: “Agriculture and the agrifood sector played a key role in our recovery from 2011 and I have no doubt it can play a central role again in revitalising rural Ireland as the new Government gets down to work.
“The challenges of climate action are ones that farmers, as custodians of the land are very aware of.
” There are many exciting and innovative measures that farmers can take to help meet our climate change targets.
“I look forward to working with farmers and farm organisations to help to develop those further.”
Mr Heydon is also very mindful that political history is being made with the first ever coalition between Fine Gael and Fianna Fáil and that this is against a background of extraordinary times.
He explained: “This is an extremely difficult time to be entering Government, but Fine Gael has never shirked responsibility when the country has needed leadership at times of adversity, and I am looking forward to meeting the challenges ahead.
“These are unpre cedented times and the challenges the new administration faces are great and many.
“I look forward to playing a part and making a real difference in these challenges ahead.”
Mr Heydon also paid tribute to his family and local party team. “I would like to thank my family and many supporters who have stood by me throughout my political career and helped me reach the honour of this office, and my role in this Government today.”

Kildare North TD James Lawless has revealed that new Taoiseach Micheál Martin made a courtesy call to him telling him that unfortunately he wouldn't be among the junior ministers appointed.
Mr Lawless told the Leader: “The Taoiseach called me personally on Wednesday night [the day before the announcement] to explain the situation and to say I was on the short list but that he was constrained by “a number of factors” in the final selection.
The TD was happy to see that the Department of Higher Education and Innovation, which he had originally proposed in opposition, became a full Ministry.
He added: “I am pleased to see that work come to fruition with the establishment of the new Ministry. I think it bodes very well for the sector.
“It is quite an achievement for me on a personal level to see my work produce results at that level.”

Meanwhile Fiona O’Loughlin has become the second County Kildare politician to be promoted having been elected to the Oireachtas.
Ms O’Loughlin is now Fianna Fáil’s Seanad spokesperson on education.
The Rathangan native is a former primary school teacher.
Ms O’Loughlin lost her seat as a FF TD representing Kildare South at the last general election when she just lost out to newcomer Cathal Berry (Independent), who took the last seat with just over 300 votes more than her.
This was after she had outpolled Mr Berry at the end of the first count.
The eldest child of the late Cllr Jimmy O’Loughlin, Sen O’Loughlin won the seat in Kildare South 2016 as FF claimed two of the three seats.
Three months ago she returned to national politics by winning the senate seat.