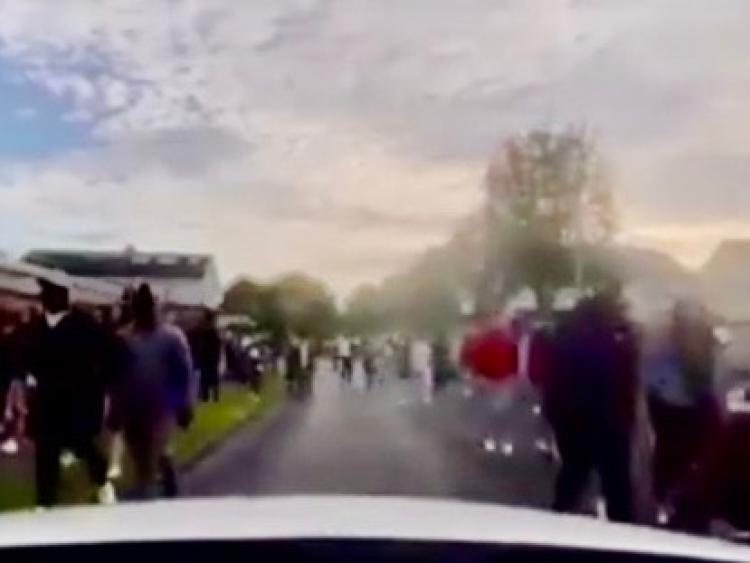 Kildare Gardaí arrested three youths and dispersed a large number of teenagers and young adults after a disturbance in a residential area in Leixlip.

Gardaí issued a statement on the incident which happened last Monday evening.

At least two Garda patrol cars and uniformed officers can be seen in the vicinity.

A Garda statement said: "Following reports of a disturbance at residence, Gardaí responded to call at a location in Leixlip at approximately 7:00pm on 6th July 2020.

"A number of youths were asked to leave the area."

"They will be will be processed under the Juvenile Diversion Programme."

Earlier this month, Drinkaware, the national charity working to prevent and reduce alcohol misuse, urged parents and guardians to caution their teenagers against attending large house parties during the ongoing Covid-19 pandemic.

Footage emerged days before of gardai breaking up a house party of between 50 and 70 teenagers in a housing estate in Waterford City.

Drinkaware CEO, Sheena Horgan, said: “As we’re hearing about potential ‘Longitude house parties’ taking place this weekend, we urge parents to stay vigilant and if they hear about an event, to caution against attending and share the information with other parents so they can make informed decisions.

"Teenagers and younger people have experienced an unsettled time of late, particularly those in state exam years. This has led to a rise in stress and anxiety. At 82%, our data clearly tells us that 18-24-year-olds overwhelmingly associated drinking with being social.

"So, there is a concern that some may see easing restrictions as a time to gather among friends in large groups to reconnect and that alcohol misuse may occur.

"Young people have to date played their part in slowing the spread of Covid-19 in our communities by doing something that feels unusual and against natural instincts to socialise.

"But now really isn’t the time to reverse all the sacrifice made over the past three months.

"We encourage parents to speak openly with their children to find out if they have been invited to a house party or large gathering and discuss the reasons why now is the time to hold firm.

"Let’s stay the course, follow HSE guidance and look forward to the day when we can come together safely.”