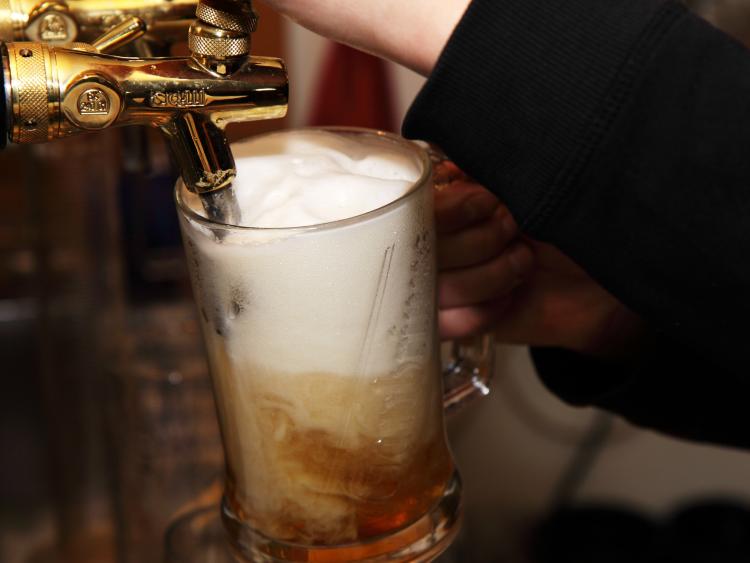 A County Kildare publican said he will be among scores of pubs set to reopen on July 20 and he will strictly observe social distancing in an effort to stop the Covid-19 virus spreading.
Paul Mooney of 109-year-old Mooney’s Bar in Monasterevin said: “All that a lot of people want is just three pints, have a bit of craic, have a chat, and go home.”
Meanwhile, Garda Supt Martin Walker of the Kildare District insisted that all pubs and restaurants were compliant when checked by gardaí last weekend as part of a new clampdown.
Concerns have been raised after footage emerged at the weekend of a crowded street in Dublin city where customers were drinking takeaway drinks but social distancing was not being observed.
A stark warning was given on Monday about the future of jobs in the 183 pubs across County Kildare.
Figures released by drinks industry lobby groups claimed that up to 3,650 direct jobs in the trade could be permanently lost in the county if pubs lose half their business in coming months.

Veteran publican Pat Keane of the Hanged Man’s in Milltown told the Leader: “It would be terrible if pubs stopped, it is the craic that goes with the pub.”
He added: “We will have to make sure that pubs don’t end.”

Supt Walker, says ‘intermittent’ inspections were held on the newly reopened premises over the weekend across the county, and they were all complying.
He said: “We inspected pubs intermittently, people are cooperating and taking the guidelines seriously.”
Supt Walker said: “Realistically if pubs don’t supply food, then they are chancing their arm. It is cooperation, rather than trying to indoctrinate. They know what to do. There are not lads going in for a tear of porter, they are going in for a meal, and enjoying it. All over the county of Kildare is compliant.”
He says that they have to wait on directives about social distancing of two metres for July 20.
He said: “I would only be guessing, we have to wait on directives. I appreciate the co-operation of all the pubs, they are selfless rather than selfish.”
Meanwhile, the owner of a Monasterevin pub, established since 1911, says it is ‘unfair and unethical’ that pubs ‘barely making a living as it is,’ are not allowed to do anything, until July 20, or maybe later.
Paul Mooney, of Mooney’s Bar, Monasterevin, a publican for the past 45 years, fears that if the two metres social distancing rule is kept up, then 99.9% of rural pubs could be facing closure.
However, he will do his utmost to stay open. Currently only pubs, operating as restaurants, are permitted to open. Referring to those serving food being allowed open earlier, Mr Mooney said: “It is crazy, whoever came up with the rule, it is a ridiculous rule. We all have to be responsible, there is no point asking gardaí to do it, we have to be responsible ourselves.”
He said: “We are there since 1911, two World Wars, the last pandemic, recessions and this is the only one thing that closed us.”
Mr Mooney plans to reopen the pub soon. He said: “Social distancing will not be an issue, for rural pubs, during the week, and never has been. We will open, provided that the protocols give us a fighting chance. We are closed down since March 14, we are the hardest hit. What has food got to do with stopping the virus? If we opened up all the pubs, it would be better. How are Gardaí going to police this?”
Mr Mooney says that Kildare pubs need to be allowed reopen for the preservation of culture.
He said: “Ireland was sold to tourists for years as the craic in the pubs, now those pubs are few and far between. We have done our duty and closed. We have to open on July 20. We are there a long time, hoping that we have done something right in the 110 years and people will come back. All that a lot of people want is just three pints, have a bit of craic, have a chat, and go home.”
He says that the pubs need to reopen to stop the ‘society killer’ of at-home drinking. “Since the Covid started, any supermarkets or off licences have drink being handed over the counter. It is a society killer, having people drinking at home and not going out. It is a dangerous phenomenon. I miss all the lads coming in, all the interaction. Fortunately I do not know of anyone who had Covid. We have to get back and be responsible.”
Pat Keane, of the Hanged Man’s Pub and Restaurant, Milltown, is currently operating as a restaurant, but hopes that the pub will return on July 20.
The pub hosted one of the first gigs by singer Christy Moore.
Mr Keane also ran Berneys pub in Kilcullen and is a publican for 30 years.
He said: “It would be terrible if pubs stopped, it is the craic that goes with the pub.
“When we look at all the great writers, they all at some point referred to a pub. Christy Moore had one of his first gigs in the Hanged Man’s. We will have to make sure that pubs don’t end.”