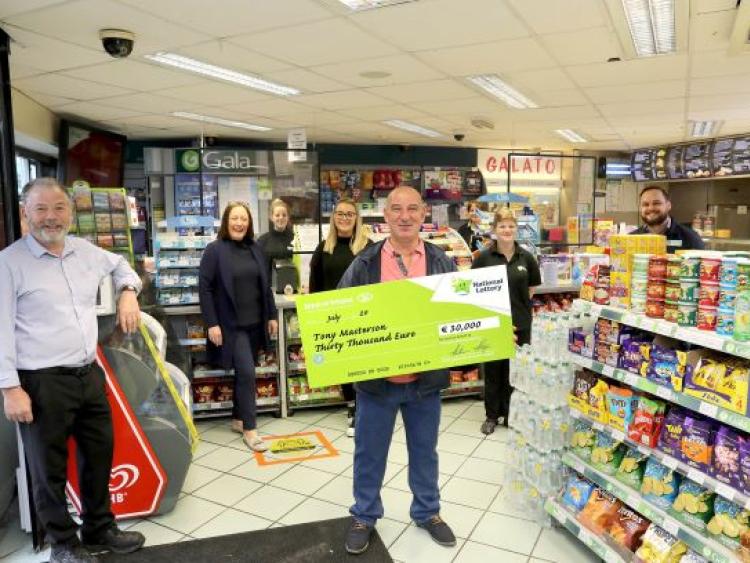 Dublin ship worker, now living in Kildare, admitted that his legs “went to jelly” when he discovered that he had won €30,000 on a National Lottery scratch card.

Tony Masterson, from Tallaght, Dublin 24 but now living in Athgarvan, Co. Kildare works as a shipping supervisor but even he struggled to find his ‘sea legs’ such was the shock upon learning that he won a small fortune.

He spoke of his shock after he claimed a cool €30,000 won on an All Cash Tripler scratch card back in April, availing of the National Lottery’s postal claim process. He bought the scratch card at Gala Athgarvan, Liffey Mill, Athgarvan, Co. Kildare.

He said: “I remember it was Good Friday (10th April) and I had just got off work and I swung by the local Gala beside where I live to grab a few things. It’s funny, I rarely buy scratch cards, only once in a blue moon but I play Lotto every week so this really was a stroke of luck. When I scratched it I think I went into shock. It was a mix of excitement, shock and denial and I got members of the family to double check it. I just went to jelly and to be honest I didn’t think it was real.”

Tony had to wait a little longer than normal due to National Lottery HQ being closed due to the COVID 19 restrictions but availed of the postal claims process.

He continued: “Even after I spoke to the claims staff in the National Lottery, who assured me that I had won the thirty grand, there was a small part of me that refused to believe that this was real. It wasn’t a nice few days waiting for the cheque to arrive by post as the anticipation was killing me. I think it only sunk in when I opened the letter and saw the cheque inside. I mean, you hear of people winning but you really never expect it to be you”.

So where did Tony keep his winning scratch card while he was waiting to claim? “It was in the safest place in the house… the inside pocket of my uniform coat”, he said.

Speaking on plans for his windfall, Tony said: “Like everyone else, with the lockdown, there really hasn’t been the opportunity to celebrate. I will look after the family of course and I’d love to take a holiday but I’ll definitely wait a while before I think about going – possibly next year when it is safer to do so. I’m also going to take a few friends and work colleagues out for a meal and a few drinks”.