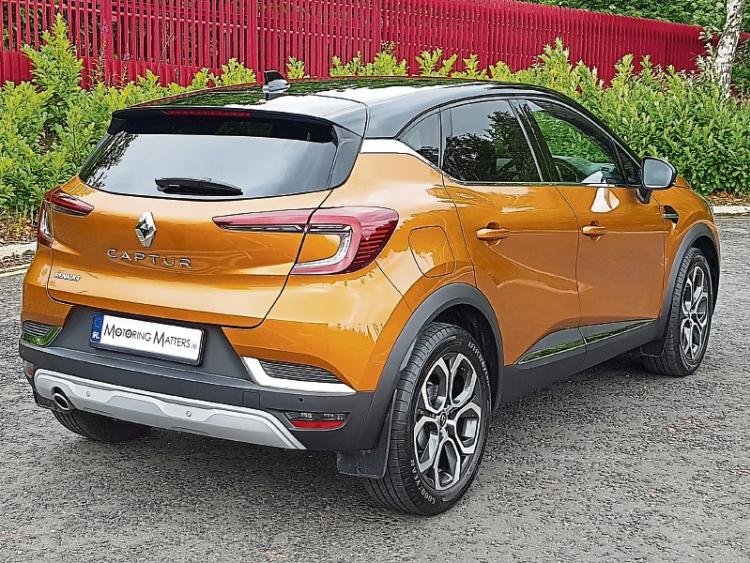 A pioneer of the small SUV market, the Captur has sold more than 1.2 million units since its launch in 2013, rapidly becoming the best selling model in its class across Europe.

In a sector that has become extremely competitive, the recently launched all-new Renault Captur has reinvented itself without losing the unique identity that made the original such a success. Featuring athletic and dynamic new looks, an even more welcoming and practical interior, and setting new technology standards, the new Captur is more grown-up and upmarket than ever.

The new Captur is graced with an even stronger SUV identity than before, and is an unmistakable presence on the road. The totally redesigned exterior is more modern, distinctive and expressive, yet it also remains true to Renault’s core design values. Longer than before by 110mm and with a higher waistline, the new Captur has a true SUV stance, which is enhanced by the tough-looking front and rear protection skid plates, the chunky protective mouldings that run the entire length of the lower body, and the prominent wheel arch extensions. Factor in the distinctively contoured wings, scalloped sides and the ‘floating roof’ treatment, and the Captur’s sleek profile makes it instantly recognisable.

At the front is a wider grille, while its very expressive front bumper features two wide air deflectors in front of the wheel arches that help limit turbulence and reduce aerodynamic drag, helping to further improve fuel economy.

Its appearance is pushed further upmarket by the careful use of chrome trim for the window surrounds, the bodyside mouldings and the inserts set into the front wings. The material is also used to embellish the boldly designed tailgate.

The interior of the all-new Captur can also be customised with a choice of seven different colour combinations.

Engine options consist of a 1.3-litre petrol unit (TCe) with a choice of 100, 130 or 155bhp, while a 1.5-litre turbo-diesel engine (dCi) with either 95 or 115bhp is also available, with all engines complying with strict Euro6 emission standards. Joining the range shortly is an E-TECH Rechargable Hybrid, which will make the all-new Captur a tempting proposition to an even wider audience. A five-speed manual gearbox is reserved for the TCe100 and dCi95 models, while a six-speed manual is available in higher powered variants. A slick seven-speed dual-clutch automatic is available with the TCe 130, TCe155, and dCi115 engines.

My test car was a new Captur in top spec S-Edition trim, and was finished in stunning two-tone Desert Orange and Midnight Black metallic paint for maximum visual impact, while an optional ‘Signature Orange’ interior colour pack provided a dash of expressive flair in the cabin.

Producing 130bhp, and a healthy 240Nm of torque, the 1.3-litre TCe 130 engine enables the 0-100km/h sprint to be completed in just 9.6-seconds. With this engine capable of consuming as little as 5.2-litres of petrol for every 100km driven (combined driving cycle), the car’s standard 45-litre fuel tank will allow up to 865km’s between fills.

The dual-clutch seven-speed automatic transmission in my test car allowed for smooth take off and acceleration, and proved itself to be simple to use.

My test car performed admirably on a variety of motorway and rural roads, with sharp steering responses ensuring that bends can be negotiated with ease, while the car remained comfortable and composed when faced with imperfect road surfaces. Annual road tax across the entire new Renault Captur range is between €190 and €270, with my test car falling in to the latter bracket.

The all-new Renault Captur will delight new and existing Captur owners alike, as it possesses all of the hallmarks of an SUV, and leaves a strong first impression.

Pricing for the new Captur starts from just €21,995 (ex-works), with all Renault passenger cars attracting a five year/200,000km warranty as standard. For the initial ‘202 registration period (and for a limited time), Renault are offering a super-low finance rate of just 2.02% APR, on top of €1,000 cashback, and no payments for the first three months.

Contact Joe Mallon Motors, Naas, on 045 897675, for information on Renault in Kildare