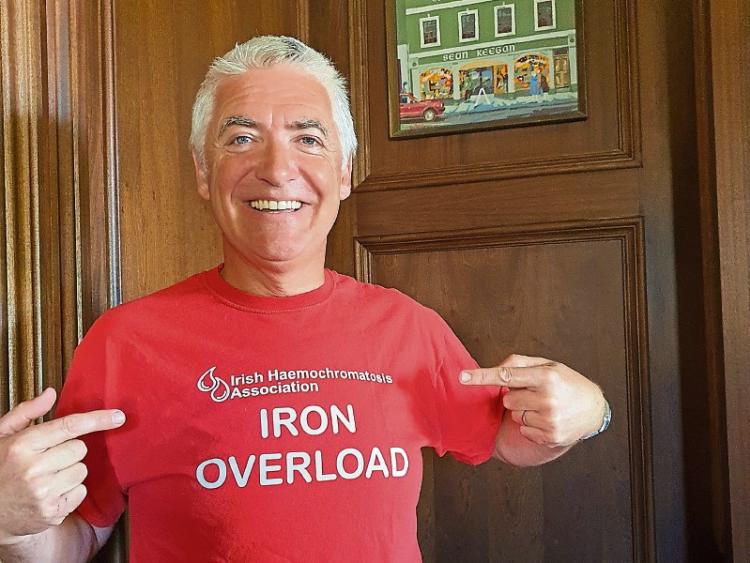 One in five Irish people carry the haemochromatosis gene and it is Ireland’s most common genetic condition. Ireland has the highest rates of the disorder in the world, so early diagnosis is vital to save lives, as lack of treatment can lead to premature death.

Newbridge man Brian Keegan is a haemochromatosis patient and became aware that he had the condition having experienced chronic fatigue.

“By lunchtime I’d be reaching for a Berocca Boost or Red Bull for an energy lift. I went to my doctor and luckily, she was very aware of haemochromatosis or iron overload as it’s sometimes referred to and sent my bloods off for tests. My results came back with my ferritin levels at 1,200. Normal levels should be at 50 so I was carrying a lot of excess Iron in my body, ” he said.

Because his levels of iron were high, he had a venesection (the drawing of blood) of one unit/ pint once a week for a year and when his level came down to normal he had a unit taken every 3 – 6 months as well a visit to the specialist once a year for a review of the iron levels.

Some lifestyle changes were necessary.

“I call them the 4 S’s — smoking, steaks, stout and supplements. No smoking because you are taking in iron directly when smoking. You can have a steak a few times a week but keep an eye on it. Stout like Guinness has loads of iron so like steaks this is best in moderation,” said Brian.

Supplements, in par-
ticular vitamin C, are best avoided because of the risk of increases the absorption of iron on top of an already increased level of absorption.

He added: “My dad, Sean Keegan of the hardware shop in Newbridge, which some of your readers, may remember didn’t die directly from haemochromatosis but had some of the symptoms which would not have helped with his relatively early death.”

Testing for the disorder only started in the 1990s so a lot of deaths went undiagnosed. However now the diagnosis is easy, the treatment is straightforward and people go on to live long healthy lives with the condition.

The disorder is not uncommon in Ireland and known as the Celtic curse — because in the distant past we did not have enough iron in our diets and our body created a faulty gene to increase the absorption and retention of iron.