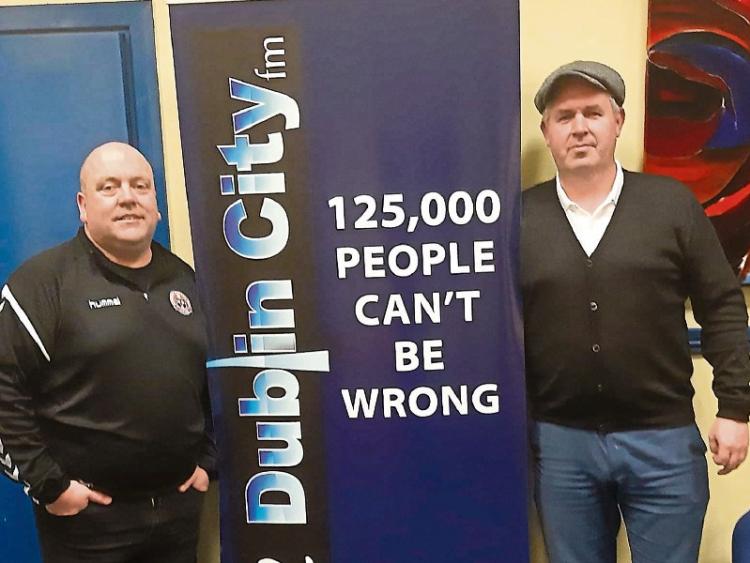 An Irish folk music radio show acclaimed as the longest-running of its kind in the world celebrated 21 years on air last February.

Two of the presenters of Sin É, which airs every Tuesday night on Dublin City FM, live in Newbridge and are well-known for their involvement with the local music scene.

Presenter and show founder Mick O’Brien is frontman of the internationally-renowned folk band The Druids, who are regulars at venues around Kildare as well as headlining shows in the USA and further afield.

Alan believes that the “true history” of Ireland can be told through folk songs and poems, a tradition that can be traced back all the way to the third century — a topic which he has studied himself for the past 20 years.

“If you look at any period in Irish history, all of the events of the day have been recorded by the bards, the poets, the songwriters. They’re ordinary people that tell the true stories and events of the day.

“The Irish would have brought music all around the world — to America, to Scotland, to England, even Jamaica. It’s such an interesting field.”

Alan’s interest in folk music was sparked as a youngster. He grew up in ‘a family of storytellers’ in Allenview Heights. But he is critical of the Irish history curriculum which cuts many figures out of official histories — leaving their stories to be told only through oral tradition and folk tales.

“Take the Rathbride column and the Irish Civil War,” he said, referring to the group of IRA volunteers captured in Kildare in December 1922.

“Those men were captured just out the road at Moore’s Bridge at the Curragh Racecourse. I went to Scoil Mhuire and I went to the PBS, and I never heard of the Rathbride column, even though it was one of the most significant acts of the Civil War.

“I think that the history curriculum in the schools fails us. It’s great to have local heroes, because they inspire the next generation.”

He also notes that the stories of many women have been written out of history and survived for years mainly in the folk tradition - including many revolutionary figures such as sniper Margaret Skinnider; Molly O’Reilly, who hoisted the flag at Liberty Hall before the 1916 Easter Rising, Dr Kathleen Lynn and others, who became more widely known once again during the 1916 commemorations.

Despite the country’s long and proud folk tradition, there is no denying that it is not as popular as it once was.

Says Alan: “At the present, country music is a huge industry, and the local radio stations all around the country do a great job in promoting it — but our folk music, the artists writing about the political and social events of the day is sadly in decline.

“Those that seem to be doing well are the great heroes from the sixties — the Christy Moores, the Finbar Furys, but what we try and do is give a bit of exposure to the next generation coming through on the radio show.”

He cites Newbridge’s Sara Ryan, Myles Gaffney from Cork, and Dubliners Daoirí Farrell and Steo Wall as examples of the up-and-coming artists whose work has been highlighted on the show. Another one to watch is young Naas singer Dan McCabe, who has been paying tribute to frontline workers during the lockdown with his covers of folk songs — and his version of A Song For Ireland, which was used on The Sunday Game in May, went down a storm.

“The tradition is still there, the talent is still there, but unfortunately there is no exposure through the media. These artists need TV time, they need radio time. Facebook is great to a certain extent, and social media, but the impact of one performance on the Late Late Show can actually change a career. And while quite a significant percentage of the musical acts on the Late Late Show have been folk acts, they have been the Christys and the Finbars.

“I’d never be anti any other type of music, there’s room for all genres of music and it’s great to see all entertainment prosper, but I don’t think it should be to the detriment of our own indigenous music.”

While repeat programmes are being broadcast at the moment due to Covid-19 restrictions, which mean that presenters cannot travel to the studio, Alan hopes that they will be back broadcasting as usual on July 20.

When asked what keeps him passionate about presenting the show, Mick O’Brien said: “I just love it. There are many parts of the show that keep my interest going. The idea of bringing a new song or singer to listeners excites me. Songs can change our world, so it really is a special position to be in.

“Meeting and interviewing some of the world’s finest singer songwriters fills me with joy. With developments in technology, the show now has a global audience. It is great to get requests from people across the world.”