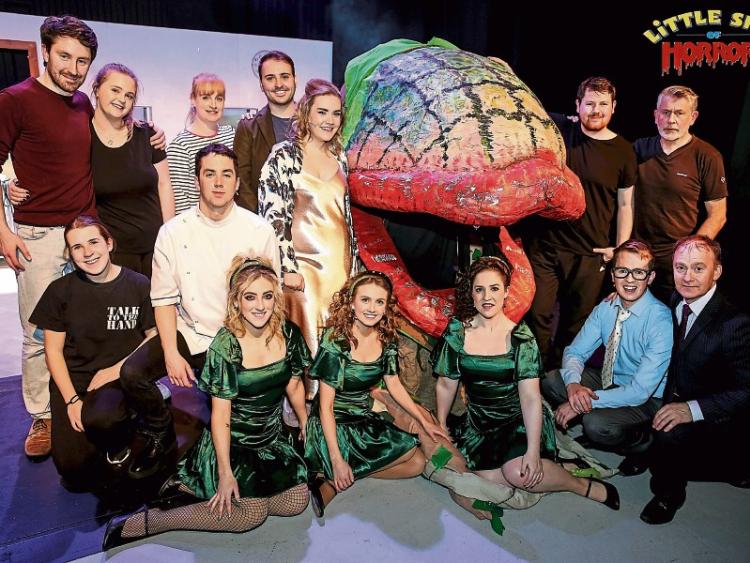 Kildare’s The Odd Theatre Company has received two nominations for the prestigious Association of Irish Musical Societies Awards. The Newbridge-based theatre group has received the honours for its recent production of the musical comedy Little Shop of Horrors at the Riverbank Arts Centre.

The nominations were announced by the President of Association of Irish Musical Societies, Rob Donnelly, on a YouTube live broadcast on Sunday of last week.

Daniel Ryan, who played the show’s meek protagonist Seymour, has been nominated for the national Best Actor Award, while choreographer Áine Foley, and the cast, have been honoured with a nod for the national Best Choreography Award. Both Daniel and Áine are Newbridge natives, and have been involved in productions with The Odd Theatre Company since the group’s foundation in 2017.

Little Shop of Horrors was staged from November 28 to 30 last year at Newbridge’s Riverbank Arts Centre. The musical follows the story of meek floral assistant Seymour Krelborn, who stumbles across a new breed of plant he names Audrey II — after his co-worker crush. But as this R&B-singing weed grows, promising unending fame and fortune to the down and out Seymour, the young florist soon learns that his appetite has a cost.

Little Shop of Horrors followed on from the group’s previous productions, including the staging of the Irish premiere of the celebrated Broadway musical The 25th Annual Putnam County Spelling Bee in 2017, and the highly acclaimed Jonathan Larson musical Rent in 2018, a production which was also nominated for a national award.

The Association of Irish Musical Societies (AIMS) is the collective body for musical theatre groups in Ireland, and is made up of approximately 130 musical societies from across the island. Musical theatre forms a significant part of the artistic community in this country, with around 14,000 people are directly involved in musical theatre productions annually, performing to an audience base of around 1.2 million.

The AIMS Awards seek to recognise exceptional performances and talent from throughout the approximately 110 musical theatre productions that take place in Ireland each year.

Speaking on his nomination, Daniel Ryan said: “To be nominated for the national Best Actor award is an incredibly humbling experience and it is recognition for the production as a whole, considering the incredible work that went into making Little Shop of Horrors the success it was.”

Nominated choreographer Áine Foley, said: “I am very much indebted to the fantastic group of dancers we had during this production, particularly Lynn Carter, Emma Kilduff, and Cherise O’Moore who played Ronnette, Chiffon, and Crystal.

“Their commitment and abilities ensured that every piece of choreography was delivered in the most captivating way.”

The winners of the AIMS Awards will be announced on Saturday, 19 September.