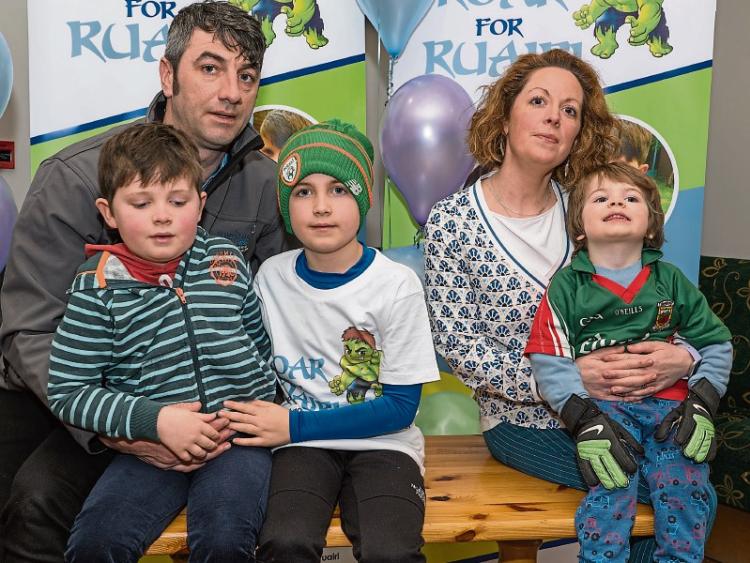 The McDonnell family, Clane, at the launch of Roar for Ruairí. Picture: Tony Keane

Primary school student, six year old Ruairi McDonnell has a terminal illness and the aim of this appeal is to raise €150,000 to help the McDonnell family make the necessary renovations to their home and to help with the ongoing homecare costs for Ruairi.

And funds which are raised in excess of the costs of providing for Ruairi shall be donated to charities caring for children.

The six year old has already lost his sight.

Martin, originally from Ballycastle, County Mayo, is a valued member of Rathcoffey GAA and both he and Ruth have many friends and family living in the in the area.

Ruairi's dad, Martin, said: “Thanks very much for making this journey easier.”

Last October 31, Ruth and Martin received the devastating news Ruairi had been diagnosed with a very rare degenerative and life-limiting neurological condition.

This very rare and fatal condition affects 1:20,000 people globally and the disease has been rapid and relentless in its progress over the past three to four months.

It has already robbed Ruairi of his sight, his ability to speak and much of his cognitive ability.

Medical experts in Ireland and abroad say there is no medical treatment for this terrible disease.

Prior to his diagnosis Ruairi had been attending school in Clane and was enjoying all the same activities as other boys his age.

He loved GAA, especially hurling, riding his bike and playing with his two brothers and many friends.

Ruairi now requires 24-hour personal care which is provided by his parents. He will require full time home nursing and the family home requires significant adaptations to meet his care needs.

The care supports provided by the state in this situation are extremely limited.

Ruth said: “Ruairi loved all his superheroes but his absolute favourite is The Hulk and for this reason we are naming our fundraising appeal Roar for Ruairi.”

This appeal is to give financial assistance to Martin and Ruth with the ongoing home care costs for Ruairi now and into the future.

On Saturday, April 4, world famous violinist, Vladimir, presents One Night in Vienna in Rathcoffey GAA clubhouse in aid of the fund.

On the first weekend in June there will be an action packed Roar for Ruairi Race Day at the brand new Summer in Town festival at Punchestown Racecourse. Tickets will cover a four course meal, guest tipster, private betting facility, and music/ entertainment to round off the day.

Further details about both events will be posted to the Facebook page: https://www.facebook.com /roarforruairi/

You can support Ruairi by donating to his Go Fund Me Page: https://www.gofundme.com /f/roar-for-ruairi

The target is to raise €150,000. Funds raised in excess of the costs of providing for Ruairi shall be donated to charities caring for children.