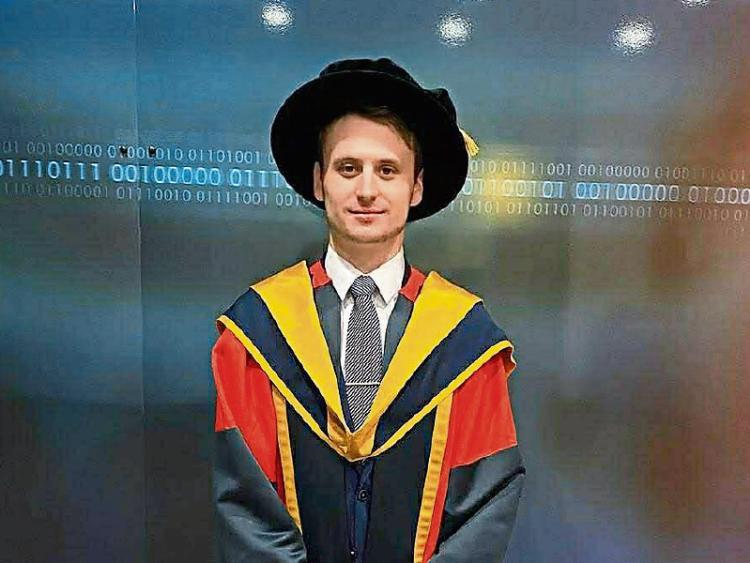 The former Newbridge College student, 29, hails from the Green Road.

He is the son of Deirdre and Brendan Duane, who is well-known as a former teacher at the Holy Family secondary school in Newbridge.

After graduating from DCU with a BSc in Multimedia, Aaron joined Insight, a researcher centre at the university.

“In a sense I very much fell into this line of research rather than sought it out,” he said. “I came to realise from working at Insight that data science and artificial intelligence were in everything we interacted with — our phones, our computers, our favourite applications. From realising how relevant and pervasive it was, I decided to take it more seriously and do a PhD on the topic, specifically with a spin on using virtual reality as method of exploring the data , just to make it a bit more novel.”

He was encouraged to apply for the Marie Curie Individual European Fellowship as he was finishing his PhD — but says he never expected to get it. About 10,000 researchers apply each year for the lucrative fellowship, which is provided by the EU as part of the Horizon 2020 fund — but only 10% receive the award.

The fellowship allows experienced researchers with PhDs to travel abroad and work on a project of their own choosing.

Aaron will travel to IT Copenhagen in Denmark in September for a two-year period while he carries out his work.

“My specific expertise relate to artificial intelligence and human-computer interaction. For my proposal, I am looking at developing a method of exploring large multimedia datasets, like Google or YouTube for example, in virtual reality.

“The simple idea is that if you were looking for one specific and obscure video on YouTube and you didn’t know the name of it, you would really struggle to find it. This isn’t a problem that YouTube or Google have really solved and I’m looking at trying to apply interaction techniques in virtual reality and artificial intelligence to see if I can try tackle it.”

On completing his research, there will be several career paths which the Kildare man might choose.

“There will always be an option to return to a research centre like where I began and this time take the lead on a large EU funded project. There is also the option to just become a full-time lecturer at a leading university. For the moment, I think I envision eventually leaving academia to pursue a research career in industry and hopefully I might eventually lead a team in the research department of some global corporation like Google, Amazon the like. Who knows?”