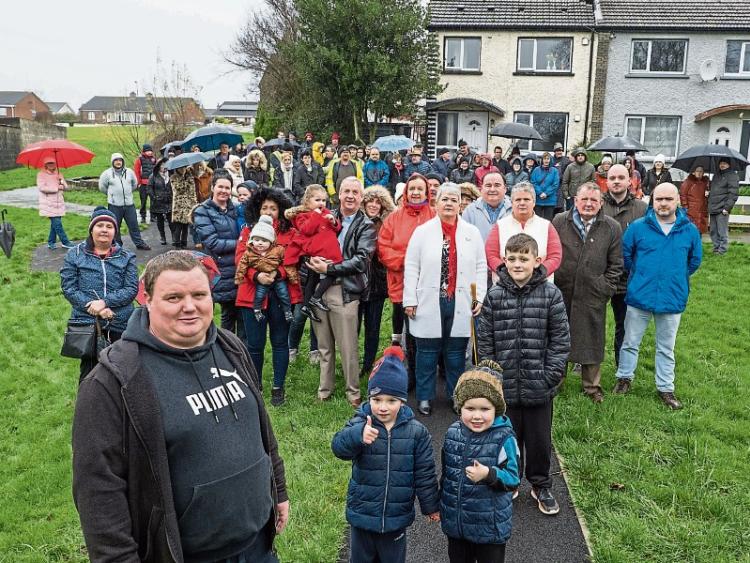 A 95-year-old Kilmeague woman, who had to leave her fire-damaged home last April, might be back in it next October, subject to no unexpected or unforeseen delays, Kildare County Council has said.

A peaceful gathering was held in Kilmeague last Saturday at Willow Lawns, aimed at putting pressure on Kildare County Council, which rents the house.

On Sunday April 14, 2019, four family homes were badly damaged by a house fire.

The homes, one of which was rented from the Council by Mrs Marie McDonagh for the last 54 years, had to be evacuated. She is currently housed in Kilmeague but is desperate to go home.

Her grandson, Thomas, told us: “If we could just tell her when work is starting it would give her a lift.”

Mrs McDonagh’s granddaughter, Mary McGrath, said that between 100-150 people supported the family on a rainy day.

Cllr Brendan Weld, who raised the issue in public last year, is unhappy and angry with the delay. He told us the damage to another house, where the original fire took place, was repaired and the family were back within six weeks. “The delay by the Council in doing temporary repairs to Mrs McDonagh’s house has made the situation worse,” he said.

The Council told the Leader: “In the case of serious fire damage to property owned by Kildare County Council, the procedures with regard to technical inspections and insurance investigations, in consultation with An Garda Siochána, are commenced. On completion of this process, and based on the extent of the damage to the property, the Council may deem it necessary to appoint a consultant, in accordance with tender timelines and procedures, to prepare a tender for the required works to reinstate/rebuild the property.

“A consultant has been appointed to prepare a tender for the required works and requested to prioritise this specific project in Kilmeague.

” It is anticipated that a contractor will be appointed in Q1 2020, and the estimated timeline for completion of the works will be approximately six months, subject to no unexpected or unforeseen delays.”