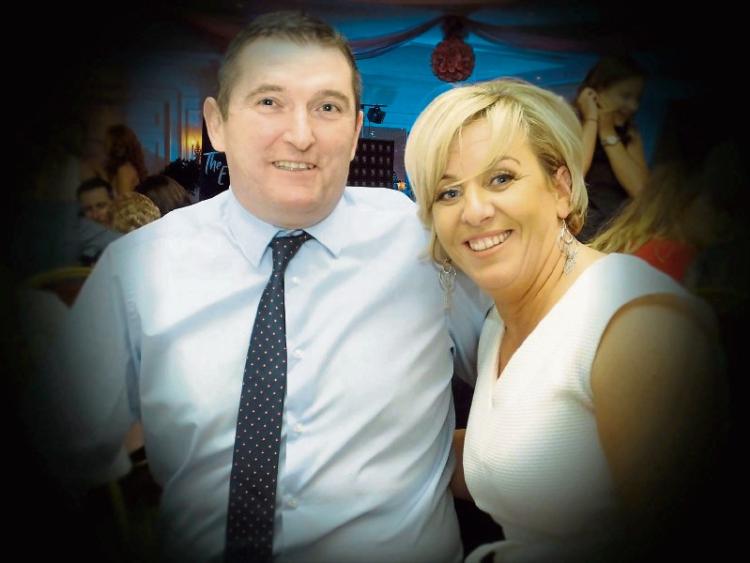 Hundreds of mourners bid farewell to a well known father-of-three who lost his brave battle with cancer on New Year’s Day.

St Conleth’s Parish Church, Newbridge, was packed to capacity on Friday morning, January 3, last for the Requiem Mass of Alan Kavanagh, who was aged just 46.

Fr Paul Dempsey, PP, performed the ceremony for the popular Highfield Estate man who was a former player, manager, selector and committee member of Moorefield.

A guard of honour was performed by Moorefield players and officials along with members of the Monaleen GAA Club in Limerick where Alan and his family have been living for the past number of years. Alan was a senior director with the Stryker Medical Corporation in Limerick.

Seamus Murray, life long friend and brother-in-law of Alan, gave the eulogy along with Alan’s son Scott and daughter Amy. Alan was laid to rest in St Conleth’s Cemetery, Newbridge, after the Mass.

Alan was diagnosed with liver cancer in November 2017 and locals rallied around to fundraise for his treatment. The Curragh Racecourse held a special race on October 13 to help contribute to the cost of hospital procedures.

Moorefield GAA Club said in a statement that it was heartbroken to hear of the passing of Alan.

The club added: “Alan was a lifetime Moorefield member, a staunch supporter, a former player, a former selector, a former committee member and a great friend.

“He travelled the length and breadth of the county and country to support Moorefield teams at all levels and always supported the club with great pride.

“He was a mighty Moorefield man, a true gentleman and he will be sadly missed in Moorefield GAA.

“Our thoughts and prayers are with Eileen, Scott, Amy, Jamie, the Kavanagh family, the Murray family and his friends during this difficult time.”

Friend Paul Dempsey said on Facebook: “Heartbroken to hear of the passing of Alan. A true Moorefield man.

“Someone as special as Alan will never be forgotten.

“He will remain in our hearts forever.

“Thoughts and prayers are with Eileen, Scott, Amy, Jamie, the Kavanagh family, the Murray family and his friends during this difficult time.”

McDonnell’s Bar in Newbridge, which is popular with Moorefield supporters, said in a statement: “Tragic news today. Our thoughts are with Alan’s family and friends.”

Alan’s remains reposed at his mother’s residence for most of Thursday afternoon and evening, January 2.

The house saw a constant stream of people visiting to pay their respects, including his many friends and work colleagues in Kildare and Limerick.