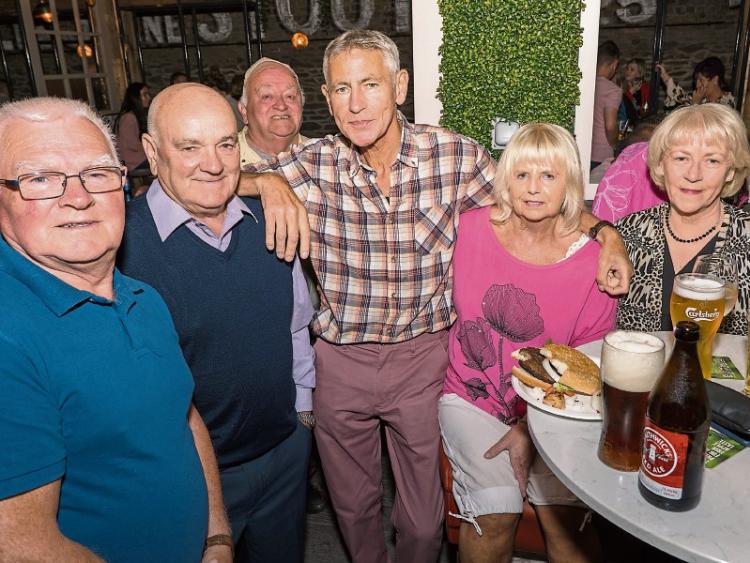 McDonnells of Newbridge was literally packed to the rafters on August 30 last and for good reason. An event organised in support of popular Newbridge photographer Pat Tinsley was hosted, with sport clubs, and the community turning out in force to contribute to, and show support for Pat who is battling a serious health condition.

Over €15, 000 was raised from the event in McDonnell’s as goodwill and generosity was extended to Pat who was described by event organiser Jackie Tyrell as Newbridge town’s “own personal photographer — a preserver of Newbridge memories”.

It’s rare for the chirpy photographer to be rendered speechless but he was lost for words when the proceeds of the appreciation night at McDonnell’s were fully realised.

A cheque to the value of €15,266 was presented to the Newbridge photographer who was (briefly) silenced but “over the moon” with the community’s generous response, and also the great show of support from the wider sporting sector.

Pat’s condition is hATTR (hereditary Amyloidosis) and he was surprised to find that several of his family on his mother’s side, had also experienced the disease.

After the initial diagnosis, treatment and further analysis had to be done in the UK, another arduous task for Pat who was already encountering fatigue and dizziness. Patisiran, a drug which was being trialed in the UK — with favourable results — was not available to patients here in Ireland.

Prior to August’s appreciation night, Pat received the good news that he would be given the upgraded version of Patisiran here in Ireland, and that he would be able to be treated by Dr Mark Coyne at the Mater Hospital, a senior haemathologist specialising in amyloidosis.

His joy was short term, however, as he was then informed there were already enough people participating in the Patisiran drugs trial. Five patients were able to avail of it here, through the drug company’s “compassionate programme”.

Alas, Pat was disappointed not to commence the drug but Dr Coyne is confident he will receive it soon, as Patisiran has finally been approved in the EU.

Jackie added: “A special word of thanks to McDonnells for hosting the appreciation night on August 30. The staff were tremendous, and it was so generous of the two Erics to donate the profits from the bar also on the night.

“On behalf of Ronan, Eric senior and junior, and all who helped out and supported the night in any way, thank you so much. Go raibh míle maith agaibh go léir!”

Pat was overcome with the generosity extended him at McDonnell’s appreciation night.

“I have been amazed and humbled by the public reaction to the battle I’m waging with this rare and fatal heriditary condition. The reaction on social media have been overwhelming”.

He added he wished he could thank everyone individially, but herein, he’d like to say a huge thank you to all who organised or supported the event, sponsored a prize, gave donations, etc.

”Truly, I feel humbled by it all” he added.