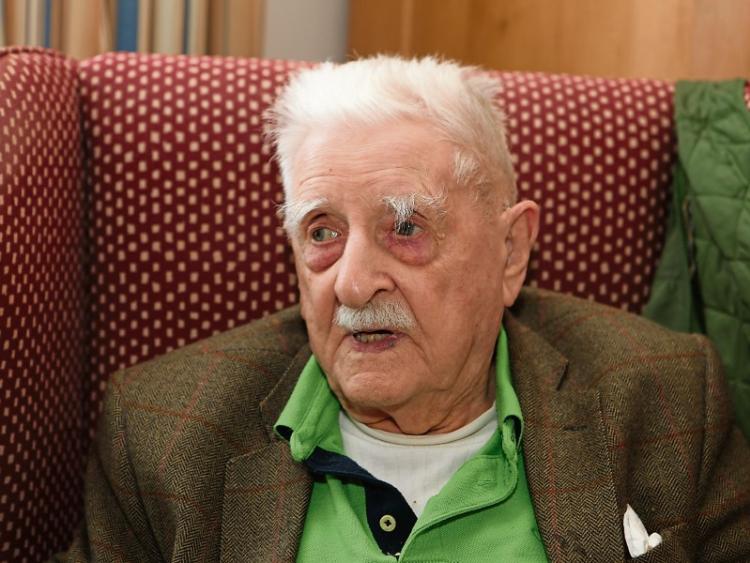 Born on May 10, 1920, to John and Margaret Robinson of Newberry Hall, Carbury, Co Kildare, Dick was initially taught at home, before attending Clongowes Wood College in 1932.

Amongst his classmates was Charles Mitchell, who later became the first RTÉ newsreader. It is of interest to note that Fr John Sullivan SJ taught him religious instruction. The object of such devotion by County Kildare people down through the generations, the canonisation of this saintly man is a real possibility by the Roman Catholic Church in the near future. Dick Robinson was one of the last people to have known this noted cleric.

In 1938, Dick went to work in Handley Pages, the aeronautical manufacturing company in London. Whilst there, he attended the Islington Polytechnic for further studies in aeronautical engineering.

With war looming, Dick returned to Ireland and joined the Irish Air Corps in Baldonnell, where he served from 1939 to 1945. While there, he continued his aviation education and was successful in his examinations, which he sat in Trinity College Dublin as an external student.

Subsequent to this, Dick worked in Aer Lingus, thus continuing his aviation interest, which he maintained all his life. Indeed, the Flying Flea, the model aircraft which he, his brother Norman and his father flew, was a subject of local interest in the Carbury area at this time.

During World War II, Dick Robinson was a member of the Local Defence Forces (LDF) in Carbury and he often regailed me with stories of local patrols with his commander and cousin, Ned Robinson from Kilrainey.

In the late 1940s, Dick returned to Newberry and developed an interest in sheep husbandry. As he always said, “I knew nothing about farming — so I became a shepherd!”. He built up his flock to some 800 ewes and, with lambs, his flock totalled some 1,500 sheep. He became an expert on sheep farming, reducing animal mortality and increasing the number of twin/triplet lambs in his holding

In 1950, Dick was invited to write for the Farmers Journal by the editor, Paddy O’Keeffe. He travelled the country as a photo-journalist for the great newspaper. He was influential in getting Patrick Kavanagh, the poet and novelist, to write for the paper, and became a friend of Paddy. Indeed, Dick often showed me photographs he took and processed of the great man in his south city flat.

Another colleague of Dick on the Journal was Gerrit van Gelderen, the illustrator, who worked in early RTÉ on the nature programme, Amuigh Faoin Spéir.

Perhaps it is no wonder that Dick Robinson became a journalist. His ancestors on both sides had ink in their veins. Matthias Bodkin KC, Dick’s maternal grandfather, was a noted journalist. His description of a Sligo public hanging, which he wrote for the Freeman’s Journal, was worthy of Charles Dickens. Bodkin was successfully returned a member of the Westminster Parliament for the Roscommon Constituency in 1892. While a member of Parliament, he wrote detective novels to support his family, as members of Parliament were not paid at the time. The Adventures of Paul Beck, was just one of his popular series.

About this time, Dick Robinson became involved in the establishment of Macra na Feirme, where he served at local, branch and natural executive level. He had no interest in the politics of farming, as pursued by the National Farmers Association at the time, but he had an abiding interest in promoting rural life and improving the lives of rural people. In this regard, he travelled the country, running question times, seminars and the like, to establish this great organisation.

Dick Robinson became a regular panellist on Radio Eireann’s Field and Farmhouse, which was chaired by Michael Dillon or “Kowjak” as Irish people called him.

For over thirty years, Dick was a member of the Library Committee of Kildare County Council, thus displaying his abiding interest in improving the lives of rural people.

Dick married Margaret Ryan, a pharmacist from Cashel, Co Tipperary, who was sadly killed in a car accident in 1971, a few short years after they married. Dick and Margaret were avid theatre attendees in Dublin and with particular pleasure, Dick recalled attending Gate theatre shows, where international play-writes such as Ibsen and Chekov had their works performed. Money was in short supply in this era and Dick fondly remembered Lord and Lady Longford ‘whooshing’ the small attendances at these shows up into the vacant expensive seats, to the obvious delight of the patrons.

It is of interest to note that Charles Mitchell, mentioned earlier, was a prominent member of the Dublin theatre scene at this time.

Tragedy also visited Dick’s family, when his brother Norman was killed in action in 1943 in World War II. He was also predeceased by his sister, Nora, who died in 1984.

So, as befits one who lived a long life, living into his 100th year, Dick Robinson had many careers: aviation engineer; soldier; farmer and photo-journalist.

He shared his time and knowledge generously with all who came to his beloved Newberry Demesne. Descendants of those who owned and worked on this estate have, over the years, visited and returned again and again to visit Dick, and share his wisdom and knowledge.

Similarly, relatives from all over the world have made similar visits. Without exception, all were impressed with his quiet humour and intelligence.

Local school children were a feature of these visits also, where he informed teachers and pupils alike of their local heritage.

All of us who knew him are saddened by his passing, but our loss is tempered, surely, by the fact that we were privileged to know him.

Truly, it is the end of an era.