It's really all you need to see today! 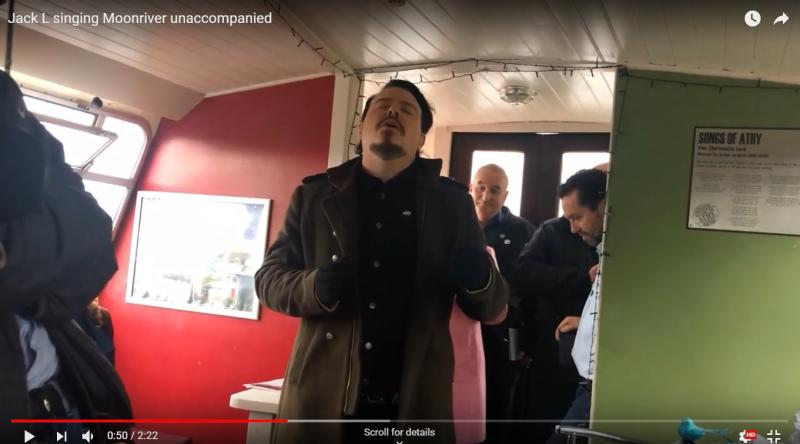 Jack L took time out of his busy touring schedule to launch the first in a series of plaques of the songs of Athy earlier today,

The idea is an extension of the Made of Athy Project which sought to celebrate the links of well known people from the music industry with the town.

It has honoured such luminaries as Johnny Marr from the Smiths and Neil Hannon of the Divine Comedy.

The idea originated with Colm Walsh who says there will be about 10 plaques put up along the Barrow river and the Barrow line of the Grand Canal, to commemorate the songs of the town.

The first plaque was erected on a boat belonging to Athy Community Boat Tours.

Mr Walsh thanked kildare County Council because, as he said “at the end of the day that’s whose money we’re spending here.

“We’re promoting two projects here. We’re promoting the community boat tours and the songs of athy - run run probably about 10 songs - all of which we will combine with the canal and the river.

“This one is by Arthur Griffith and it tells the story of an ill fated barge coming from Athy up to 13th lock.  And down further we’ll have another, ill fated boat from Athy - doesn’t have a great record - which is the famous Patrick Kavanagh poem.

“We have Jack L with us today,” Mr Walsh noted.

“I keep meeting people from all over the world who say ‘of course I know where Athy is, it’s where Jack Lukeman comes from!’ Although i think you’ll find he was called Jack L first.

“I first came to know who Jack was when he started in the Christian Brothers when he was in the Sound of Music, and the  next thing I was hearing about this troubadour from Athy around the world, singing songs of Jack Briel and then he released, with the Black Romantics his ‘Wax’ album.

“Jack has enjoyed a career both here and internationally of great renown, a great artist, as a unique interpreter of music.

“I’m going to quote Gerry Lynch, our great barber and music critic, by saying that I think his voice better now that it ever was before. It has matured into the most beautiful instrument.

“Jack is one of the greatest resources we have in the town. He recorded a very famous old song made famous by Billy Holiday called Strange Fruit. And interestingly enough Kanye West did a similar version many years later.”

Jack L is set to headline the national concert hall on Sunday night and then he’s going off around England on a tour up to Christmas.