Kildare theatre group qualify for All Ireland One Act finals 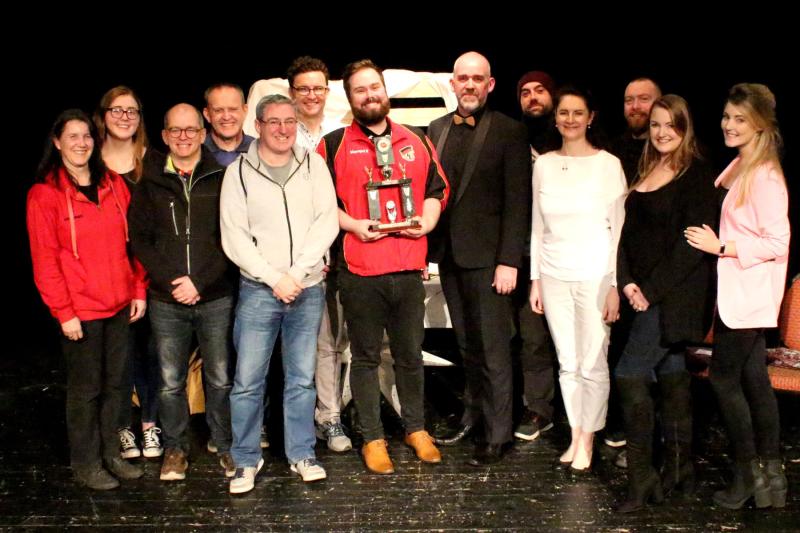 Prosperous Dramatic Society is thrilled to qualified for the 2019 All Ireland One Act Circuit final with their production of  ‘Hue & Cry’.

And to celebrate qualifying, the Society will stage a pre-All Ireland show in Prosperous Theatre on Friday, November 29.

Written by Deirdre Kinahan and directed by Karl Keogh and starring Colin Malone and James Murphy, the production has racked up the necessary points for the final which will take place in Rossmore in early December.

The group traveled the length of the country, even going as far as Letterkenny where they won best play, best director, best actor and best technical.

The play is about two Dublin men, Damian and Kevin - accidental cousins and one-time friends - who haven’t seen each other for 12 years.

Brought together on the eve of a family funeral, their differing aspirations and contrasted opportunities are brought into sharp focus in this unexpectedly moving drama full of humanity and dark humour.

Highly acclaimed on its initial run, Hue and Cry toured across Europe and the US, gaining rave reviews.

Deirdre Kinahan is a Dublin-based playwright and theatre producer who founded and ran Tall Tales Theatre Company for 15 years and is currently a board member of Theatre Forum Ireland.

She wrote her first play in 1999 when a group of women at Ruhama Women's Project asked her to write a play about their lives as prostitutes, and Be Carna was the resulting powerful debut.