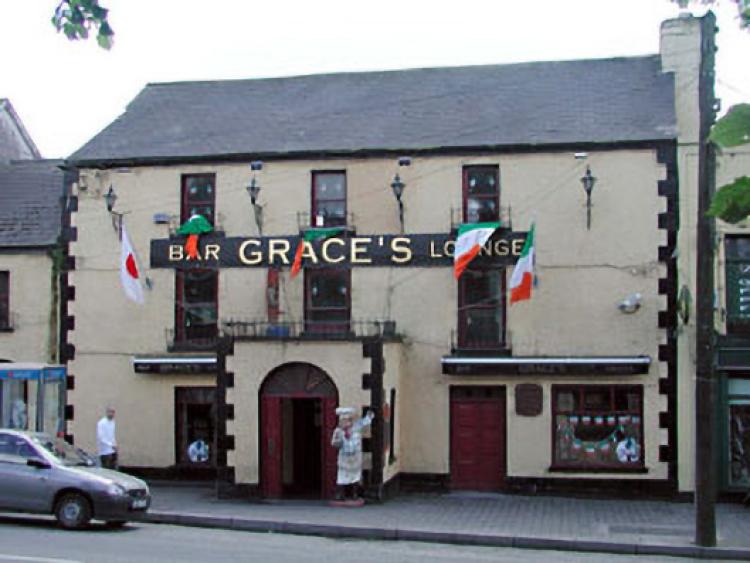 A well-known former pub in Kildare which has been closed for several years is due to be sold at an auction with a guide price of €380,000. It could be a boutique hotel, according the the auctioneers.

The former Grace’s Bar on Market Square in Kildare town is going under the hammer in the Keadeen Hotel on November 27 at 3pm.

The premises, which is in need of complete refurbishment, has a seven-day public licence.

The 601.2 sq.m (6,471 Sq ft) property sits on a fifth of an acre site in the town centre.
Grace’s was a very popular meeting place and had a loyal customer base until it closed around five years ago.
It was also a well-known stop-off point for motorists when the Dublin road passed through the town.
John Conway of selling agents Conway’s Auctioneers in Naas believes Grace’s Bar could return to trading as a bar or a small hotel.
He told the Leader: “There is a lack of bed spaces in the Kildare town area and one option is it could be converted into a centrally-located boutique hotel.”
The three-storey building is believed to date back to the late 1700s. It was extensively renovated around the early 1970s. The property is split over three levels with a yard to the side and rear.
Mr Conway said Grace’s has a pivotal location close to Bank of Ireland, Flanagan & Harhen Home & Giftware Store, the Silken

Thomas, Cunnigham’s Bar and Restaurant and other popular nearby businesses.
He added: “The success of Kildare Village Outlet has also seen the opening of new bars, restaurants and coffee shops in this area.

“In addition, long established premises are expanding their food, beverage and accommodation offerings.
“Kildare’s population has increased to just 9,000 with many new residential developments, this population will continue to expand over the coming years.”

The ground floor is laid out into a bar, lounges, an office, store room, toilets and a kitchen. The first floor has three rooms while the second floor has one. The rear of the premises features a courtyard with a smoking area.