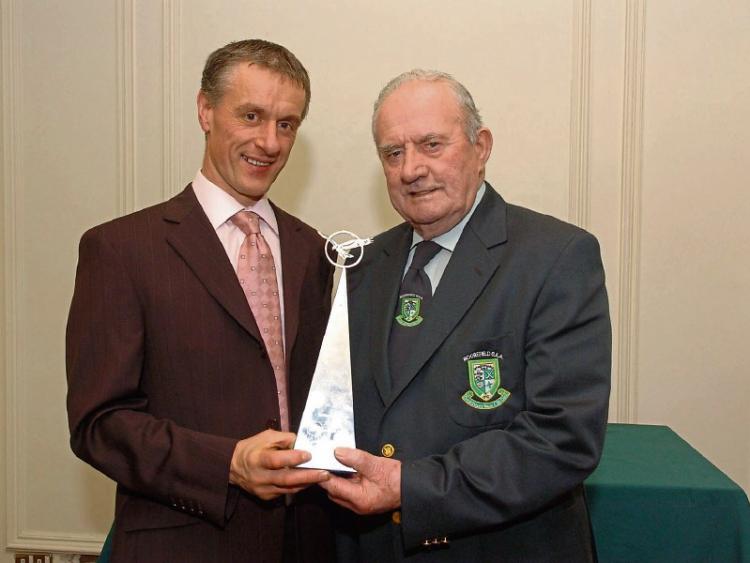 The death of Alex Whelan on Monday, October 7, evoked genuine sadness and a great sense of loss in Moorefield club, and among the people of Newbridge, throughout the county and beyond, who knew him.

Some people pass through life leaving a legacy of numerous strands and are remembered for their personal characteristics which endeared them to so many. Alex was such a person: no words can adequately describe the man who was born in Eyre St in 1924, just two years after the British army left Newbridge.

The town by then had been severely affected by the loss of employment and trade in the aftermath of the closure of the cavalry barracks, part of which later housed the very successful Irish Ropes factory.

It was there that, in 1938, 14-year-old Alex began his working life of 45 years until his retirement as foreman in 1983, following which he spent a year working in Australia.

Integrity was the hallmark of every facet of Alex Whelan’s life: in his family, in his work in Irish Ropes, in Moorefield club and in his contribution to the community and town of Droichead Nua — faith, family, friends, football and factory work all combined to make him an outstanding person in his life of almost 95 years.

Born a mere 40 years after Moorefield club and the GAA were founded, his introduction to football was with the school team of 1937.

In the 1940s, Paddy ‘Pop’ Whyte, a Moorefield player, brought Alex to the club, originally an athletic club, where, as he recalled in 2018, he was “fascinated listening to old guys telling stories and reminiscing about the old days and old times when O’Kellys started football, and later a club was organised”.

On his introduction to Moorefield, Alex began “doing bits and pieces” and this led to many very important roles in the club in later years.

He had a great talent for fundraising and was an organiser of a carnival during the second World War which made a profit of £1,200 — a fortune at that time.

He earned a good reputation for fundraising and called meetings in Neesons, with refreshments provided for everyone. He didn’t propose any means of fundraising but “prompted them about what to say”.

From draws yielding £380 when he became treasurer, profits reached £19,000 annually within a few years.

He was a very efficient in that role from 1981 to 1984, during which time the club sold the old club rooms and bought the Pollardstown site. Alex dealt very professionally with all the detailed negotiations, fundraising, financial planning and the development of the club facilities — and his legacy to Moorefield can be seen in the clubhouse and grounds, because he and others had the vision to provide the best facilities possible for the future of the club.

As a young man, Alex represented Moorefield at minor and junior levels in the 1940s, but he was unable to continue playing due to a lengthy bout of pleurisy.

When the club was restructured in the early 1970s, Alex, as he modestly stated, became “football organiser”, and led the senior team to a Leader Cup final against Raheens in 1971.

He made a major contribution to Moorefield when he wrote a definitive history of the club in 1984 — at a time when modern research methods were not even a dot on the horizon. With great foresight and a wonderful memory, he recorded the progress of the club for the centenary of both Moorefield Club and of the GAA as a national organisation.

Such was the esteem in which Alex Whelan was held by his contemporaries, and by the younger generations of club officers, members and players, he was elected to the position of Honorary President of Moorefield Club for a period of 22 years (1991 to 2012), the longest term anyone served in this position.

Alex led by example: he used his discretion and tactful interventions at critical times to calm many a stormy meeting; his quiet disposition, his encouraging words, his manner, his modesty, honesty and humility, and his praise of all things done well were some of his many qualities as a person who was hugely popular and admired by those who were privileged to know him.

The words of Lao-Tsu, a Chinese philosopher, could be applied to the life of Alex Whelan:

To lead people, walk beside them ...

As for the best leaders, the people do not notice their existence.

The next best, the people honour and praise.

The next, the people fear;

When the best leader’s work is done the people say,

In a tribute on behalf of Moorefield Club, chairperson, Tony Doyle, said:

“Alex Whelan was a leader of the best kind: he gave people the feeling they belonged and gave them ownership of any work they undertook for the benefit of the club. He displayed outstanding qualities which were crucial in the growth and development of the club and he helped in large measure to lay the foundations of the wonderful playing and social facilities we now enjoy.

“He was both a cornerstone and a pillar of Moorefield club: ours and future generations will be forever indebted to him for his tireless work on behalf of the club. On behalf of all club players and members I extend our heartfelt sympathy to Alex’s wife Peg, his sons Michael, Alex and John, his daughters Maria and Kathleen, his sister Patricia and his extended family. May he rest in peace after a life of great endeavour in many fields of activity.”