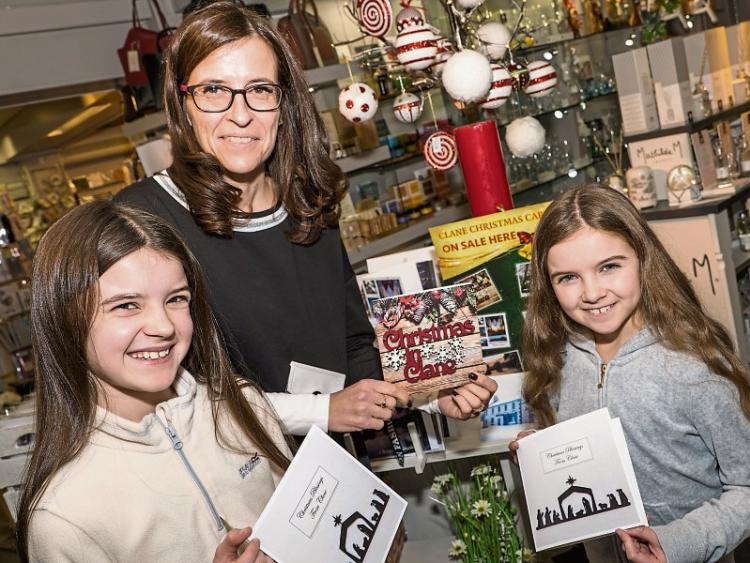 Isabel, Mandy and Ruby Connolly at the card launch

A new set of Christmas cards have been launched for Clane.

At Bob and Kate’s in Main Street on Saturday, October 12, a number of people including some of the photographers who took photos featured on the cards, gathered to see the fruits of their work, the funds from which will go directly to the St Patrick’s 2020 Festival.

“We are selling six cards for €4,” said Mary Dunne, of the St Patrick’s Festival committee, who was delighted with their work.

She thanked Bob and Kate owner, Tommy, for facilitating the launch and selling the cards.

One of the first on the scene was John Kennedy, secretary of the Community Council, who had responded to an earlier appeal to the public from Mary for photos to be submitted. “We got hundreds of shots sent to us via Facebook. We could not use some of them because there were people in them,” he said. One of the cards shows a snow scene taken by John. “I took it 12 years ago,” he said.

Also present were the Connolly sisters, actresses Isabel and Ruby, whose are spending some of the young lives before the cameras, along with their mother, Mandy, who has two shots among the cards.

Also in the mix is work by Mai Bergin, who has two shots, including a superb one of Manzor’s, also taken during a snowfall.

Mary said around 500 packs have been printed.

She said people seem to like snow scenes. Pointing to Mai’s Manzor scene, she said: “Every young person in the town has been to Manzor’s at some stage.”

During the launch, Isabel and Ruby, who both perform with the Vicki Barry school, sang for the gathering. Isabel is due to appear in a short film Danny Boy, set in Naas, along with other Barry school members.

Help on the way for nursing homes across County Kildare