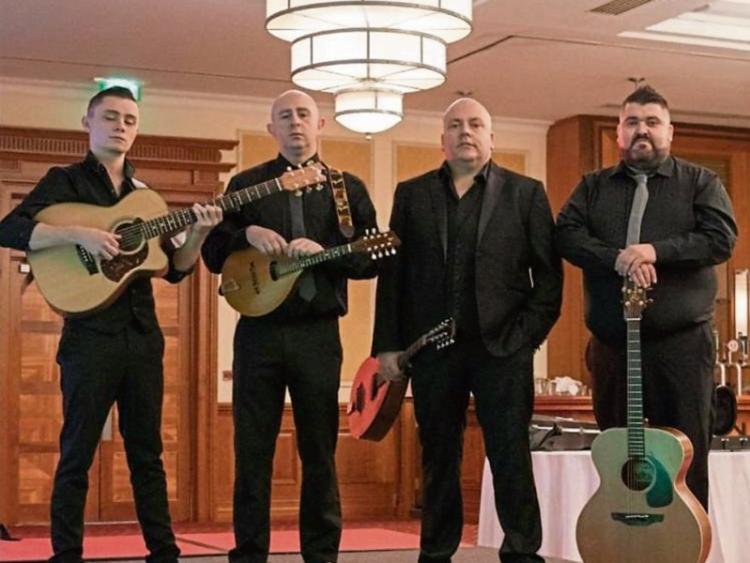 Kildare-based band The Druids are celebrating 10 years on the road this year.

The award-winning four piece folk band is made up of Paddy Mangan from Johnstonbridge, Gary Lawlor from Clane, Zak Moran from Robertstown and Mick O’Brien, originally from Ballycanew, Co Wexford, now living in Newbridge.

The Druids played their first show in May 2009, and haven’t looked back since.

“It’s amazing to be celebrating 10 years on the road. Its taken huge effort and massive commitment to get to this point,” band member Gary Lawlor told the Leader.

“We now tour the USA up to five times a year, and we regularly tour the UK and Europe. Our Irish tours are very successful and we cover all 32 counties.

“One of our favourite shows is The Moat Theatre in Naas. We play it twice a year, but this year was very special for our 10 year celebrations. The show was a full house.”

Gary added that the band have had many highlights throughout their 10 years together.

“Our highlights of the past 10 years vary in many ways, from playing at The Barrowlands in Glasgow to over 2,000 people, to headlining festivals in the USA to over 30,000 people.

“From releasing our first album, to being played on the radio. From TV appearances in the States to radio interviews in Australia.

“It’s been exciting and a huge learning curve. We have also had the opportunity to play songs and visit people who can’t make our shows due to illness.

“We are always honoured when we are asked to sing for someone who is sick or even passing away, which has happened a number of times.

“Other highlights have been the opportunity to play in youth projects and drug rehab centres. We are strong supporters of drug, alcohol and gambling recovery.

“One that sticks in our memory was performing at a fundraiser for a family in Kildare who lost belongings in a house fire — it’s a simple thing to do but it can have a huge impact.”

The band have won many awards over the years, including Best Live Act for 2016/2017 at The Irish Folk Music Awards.

The band will release their brand new live album next month, The Druids Live at The Motor City Irish Festival Detroit USA.

“We have played this festival in Detroit for the past four years now. We have a strong connection with the people of this great city.

“For many years now, we have wanted to capture our live show. The Motor City Irish Festival seemed like the right place. The atmosphere is just magic. The 10,000, plus audience were in top form.

“It’s an hour-long recording which takes you to the festival, the energy, the audience participation and the enjoyment are all clear on the recoding.

“It’s set for release at the beginning of November.”

The band also recently released their first single, Luka Bloom’s The City of Chicago. “We have received some fantastic reviews worldwide. The song is on iTunes and all downloadable music places.”

The Druids have signed to Linden Productions, and are currently working on a new theatre show as well as a new studio album. They also have six tours of the USA booked in 2020, with some huge headliner shows.