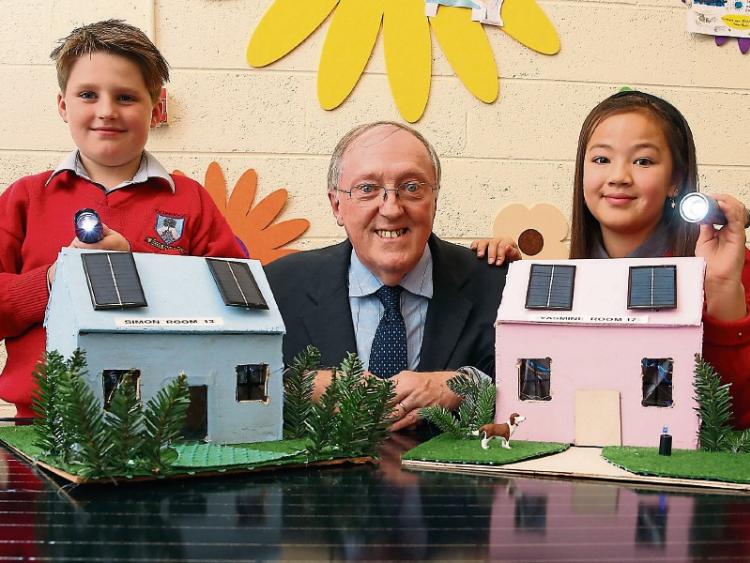 Intel Ireland last week unveiled the latest installment in its Solar for Schools initiative at a special ceremony in Scoil Mochua, Celbridge.

The solar technology project enables schools and community organisations in Kildare to generate their own energy supply directly from the sun.

On Friday, October 4, in Scoil Mochua in Celbridge, it launched the receipt by five schools in the Celbridge area of a solar package which includes 12 monocrystalline solar modules per school along with a monitoring system and 40″ TV to display the live output.

Solar module technology has been installed in each of the participating schools allowing these energy users to generate their own energy rather than draw down energy from the grid.

The aim of the project is to increase community focus on sustainability and create a greater understanding of how renewable energy and storage can help serve our energy needs.

The size of the system is designed specifically so as to match generation figures with that of consumption in the school, meaning that that the schools will have very high consumption rates with very little excess energy being sent back to the grid.

Scoil Mochua principal, Christine Carragher, estimates it will save between €800 and €1,200 a year in energy bills.

In total, 60 monocrystalline solar modules have been installed at the five schools, generating a combined total of 16,000 kWhs per annum.

The Scoil Mochua panels were installed in August.

By generating this green energy in the schools and reducing CO2 emissions, the combined systems will offset the equivalent of 1,466,390 smartphone charges annually.

The launch was attended by students and staff from the five schools along with a number of representatives from the local community. It included former principal at Scoil Mochua, Tony Doohan and former deputy principal, Claire Farrell.

Prof. John Sweeney, Emeritus Professor of Geography in Maynooth University, told the audience: “Last year Ireland emitted the equivalent of 160,000 tonnes of carbon per day, a number that is increasing instead of decreasing and something which poses a real challenge to all of us.”

He told the students: “You each can become the new climate change leaders and there are many ways we can all work together to tackle this important challenge”.

Welcoming attendees to the launch event, Scoil Mochua principal Catherine Carragher said the students of today will be the leaders of the future and the secret to climate change is to educate our young people and to create awareness.

“The key to climate change is education the children,” she said, recognizing the key role of Scoil Mochua teacher, Michelle O’Brien, the choir leader who looks after the technical STEM at the school.

“This solar project has given us the opportunity to do just that and has encouraged awareness and activity right across the school down to the youngest students. We are extremely grateful to Intel for this project and for the chance to take part.”

Also speaking about the initiative, Director of Public Affairs at Intel Ireland Hugh Hardiman said that Intel hope that together, it and the schools “can make a real impact towards a sustainable environment.”

The event also included presentations from students at each of the five schools who have received the solar package. The students presented a variety of different things, posters, poems, songs and dances to show what solar energy and ‘going green’ means to them.

The Scoil Mochua student choir were also on hand to provide beautiful musical interludes throughout the event treating the audience to songs such as This Little Light of Mine and their powerful rendition of ‘Sing for the Climate (do it now!)’.

Intel first launched the Solar for Schools initiative in 2017 providing Solar PV-and-Battery powered technology to 5 primary schools based in the Leixlip area.

In 2018 the project was extended to the Leixlip Amenities Centre, where the package included 30 Solar PV panels and a sonnenBatterie intelligent storage system. A television display system was installed in the lobby of the Amenities Centre to show how the solar system is performing and to generate awareness amongst the centre users of the facility’s commitment to sustainable power usage.

The system installed at the Amenities Centre will produce over 7,000kWh of energy per year.

Intel plans to further expand the project into the Maynooth area in 2020.